As expected Kayvon Thibodeaux is heading to the NFL. The Oregon edge rusher is declaring for the NFL Draft, according to ESPN’s Adam Schefter (via Twitter). Thibodeaux will skip the Alamo Bowl to start preparing for the draft. 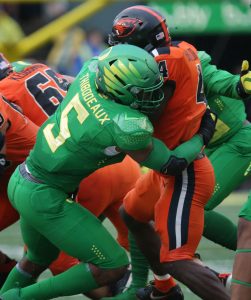 The six-foot-five, 250-pound defensive end is one of the top prospects in the 2022 NFL Draft, and he should be one of the first few players off the board. Both Michael Renner of Pro Football Focus and Dane Brugler of The Athletic had the defensive end being selected with the second-overall pick in their recent mock drafts. ESPN’s Mel Kiper Jr. and Todd McShay have Thibodeaux as the highest-rated prospect on their respective boards.

The edge rusher is a top prospect for good reason, especially following a 2021 campaign where he finished with 34 tackles and nine sacks. While Brugler acknowledges that Thibodeaux isn’t on the same tier as former top edge prospects like Myles Garrett, Chase Young, or Joey and Nick Bosa, he’ll still warrant a top pick, and he should ultimately find himself competing with Michigan edge Aidan Hutchinson for the top-overall selection.