Packers second-round wide receiver Christian Watson was placed on the PUP before training camp opened, and ESPN’s Rob Demovsky writes that the rookie could miss a chunk of training camp. Watson continues to recover from minor knee surgery that took place following minicamp.

“I think there was kind of a thought process [of] do you want to try to push through the season and finish this after the (2022) season or should we just go ahead and do it now?” said Packers GM Brian Gutekunst said. “And we just did it now. So he’ll miss a little bit of time in camp, but it’s nothing long term.

“When we invest what we invested in Christian, we’re obviously looking out for the long term. We always do. He’s a young player who’s got a big career ahead of him, so we want to make sure we protect that. It’ll be how he responds through the rehab. As soon as he’s ready, we’ll get him out there.”

The Packers used the No. 34 pick on the rookie wideout. This naturally led to high expectations for the wideout, especially with Davante Adams out of the picture. The rookie has had only three opportunities to practice with Aaron Rodgers, and the wideout will miss out on chances to click with his QB during the early parts of training camp.

More injury notes from around the NFL…

Devin Lloyd notched two six-plus-sack seasons at Utah, being effective on blitzes with the Pac-12 team. The standout Ute finished with seven last season. The Jaguars may be planning to take advantage of the No. 27 overall pick’s versatility early. They aligned Lloyd on the edge during parts of their offseason program, Michael DiRocco of ESPN.com notes. New DC Mike Caldwell plans to use a 3-4 base scheme, but he has been intermittently stationing Lloyd at defensive end on third downs. That opens the door to some possibilities for the Jags, who were aggressive at the off-ball linebacker spots this offseason. Jacksonville gave Foyesade Oluokun a top-five ILB contract and drafted Wyoming’s Chad Muma in Round 3. The Jags are set to feature Josh Allen and No. 1 overall pick Travon Walker as their most prominent edge rushers, though DiRocco describes the 272-pound top pick as a work-in-progress as a 3-4 outside ‘backer. Nevertheless, the ex-Georgia defensive lineman has lined up at that position with Jacksonville’s first-team defense this offseason.

The Jaguars made a tremendous commitment to their off-ball linebacker positions this offseason. The highest-profile addition is now under contract. 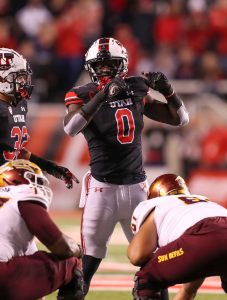 First-round pick Devin Lloyd agreed to terms on his rookie deal Thursday, Aaron Wilson of ProFootballNetwork.com tweets. The No. 27 overall pick, Lloyd will score a fully guaranteed rookie contract — one that can run through 2026, via the fifth-year option. The Utah product, for whom the Jags traded up six spots (via the Buccaneers) to land, will earn more than $13MM on his rookie pact.

Jacksonville now has both its first-round picks under contract, having signed No. 1 overall choice Travon Walker earlier Thursday. Lloyd figures to be fast-tracked to the Jags’ starting lineup. The team made Myles Jack a cap casualty and will have a third defensive coordinator in three years (Mike Caldwell). The Jags paid up for ex-Falcons starter Foyesade Oluokun, giving the productive linebacker a three-year deal worth $45MM, and then drafted Wyoming linebacker Chad Muma in Round 3. It is safe to say the Jags viewed this position as a weakness entering the offseason.

Lloyd delivered a dominant senior season with the Utes, recording 111 tackles and registering seven sacks. He added four interceptions and 22 tackles for loss, offering up Micah Parsons-type versatility. Lloyd also tallied 6.5 sacks as a sophomore in 2019. It remains to be seen if Lloyd will be capable of a Parsons-esque NFL debut, but a Jags Lloyd-Oluokun three-down linebacker pairing presents the opportunity for a major upgrade from recent years.

The Jaguars are moving up. Jacksonville has acquired No. 27 from the Buccaneers and will select Utah linebacker Devin Lloyd.

In exchange for No. 27, Tampa Bay acquired picks No. 33, No. 106, and No. 180 from the Jaguars. Tampa Bay will unofficially be on the clock following tonight’s first-round festivities. If this ends up being the final deal of the night, it will make nine total trades.

The six-foot-three, 235-pound Lloyd had a massively productive four-year career in Utah. He saved his best for last, producing 111 tackles, including 22 for a loss, seven sacks and four interceptions in 14 games in 2021. His play earned him Pac-12 Defensive Player of the Year honors and was a main reason why the Utes won their conference and made their first ever appearance in the Rose Bowl.

While he is on the leaner side for a middle linebacker (which probably contributed to his late-first draft stock), his length and speed should easily let him translate that production into NFL success.

The Giants used a top-five pick on an offensive lineman in 2020, and Andrew Thomas now anchors their line. But the team entered the offseason with needs everywhere else up front. Even after adding multiple likely interior O-line starters in March, Big Blue has a vacancy at right tackle. This has led the Giants to do extensive prep on this draft’s top tackles, including Alabama’s Evan Neal, NC State’s Ikem Ekwonu and Mississippi State’s Charles Cross, SNY’s Ralph Vacchiano notes. Other teams are penciling the Giants in to take a tackle at No. 5 or No. 7, a rival exec said, via Vacchiano. The Giants brought sizable contingents to the three top tackles’ pro days and have been previously linked to Cross, who rates behind Neal and Ekwonu.

With two picks in the top seven, it would surprise if one of the top three tackles remained on the board after the Giants’ second pick — assuming it is not traded. The Panthers, who hold the No. 6 pick, have eyed Ekwonu and Cross as well. That could put the Giants to the test with the first of their Round 1 choices, with other teams in front of them — namely the Texans and Jets — strong candidates to draft tackles as well. The Giants could exit the first round with a right tackle to join offseason additions Mark Glowinski and Jon Feliciano as part of their latest up-front overhaul.

Here is the latest from the draft realm:

Devin Lloyd is what happens when hidden talent works hard to shine. Lloyd was a 3-star recruit out of Otay Ranch High School where he had to play not only offense and defense but special teams, as well. His tape at safety, wide receiver, and punter earned him one Power Five offer: Utah. He chose to make the move to Salt Lake City, committing to Utah over UNLV, Colorado State, Sacramento State, San Jose State, and Utah State.

From there, Lloyd took the long way to the NFL. He redshirted his true freshman year and spent most of his redshirt-freshman year on special teams. As a redshirt-sophomore, Lloyd earned a starting spot at rover and led the team in tackles. Over Utah’s five-game 2020 season and full return to football in 2021, Lloyd never relinquished the title as the Utes’ lead tackler while moving to the team’s mac (middle) linebacker position. Over his last three years with the team, Lloyd tallied 249 tackles over 33 games, adding 43.0 tackles for loss and 16.5 sacks.

It’s easy to see that Lloyd lit up the stat sheet as he gained more and more experience leading the defense. It’s harder to understand when watching his film. Lloyd’s defensive approach in a bit unorthodox. Film-watchers will note his inconsistency diagnosing plays or his sometimes indirect flow to the ball. Call it luck, call it instinct, call it raw talent, but despite those technical red flags, Lloyd’s production is consistent and dominant. The best comparison for this phenomenon that comes to mind is an offensive prospect from a few years back. Between his game film and horrible performance at the NFL Combine, Orlando Brown Jr. had scouts raising questions over the tackle’s technique. He dominated at the college level, but was the switch to the big leagues going to overwhelm his poor technique? Brown is currently the only offensive tackle to make the Pro Bowl each of the last three seasons. I don’t think it’s a stretch to expect similar success for Lloyd.

Despite his inconsistencies in technique and reading the offense, Devin Lloyd dominates. He’s an incredibly physical, every down linebacker. His wide frame and aggression makes him hard to shake and, if you happen to sneak by him, he has great burst to pursue. NFL Network’s Daniel Jeremiah called him “an angry missile with long arms.”

Lloyd tops The Athletic’s Dane Brugler’s positional rankings for linebackers. In Brugler’s updated Top 100 big board, Lloyd sits near the top as the seventh overall player available in the 2022 NFL Draft. In mock drafts, Lloyd’s gone anywhere from 7th to the Giants to 9th to the Broncos to 14th to the Eagles.

Lloyd is a sure Day One-pick that will immediately be on watchlists for Defensive Rookie of the Year. The redshirt-senior from Utah will be ready to take his experience leading the Utes’ and use it to become the focal point of one lucky franchise’s defense.