Coming off disappointing seasons, the Cardinals and Rams may be looking to make high-profile cost cuts. DeAndre Hopkins and Jalen Ramsey may well be available in trades, with the Washington Post’s Jason La Canfora noting deals involving the two former All-Pros will come down to “when” and they are moved and not “if.” Both Ramsey and Hopkins have already been traded, each moving from the AFC South to the NFC West — Ramsey in 2019 and Hopkins in 2020. Although Ramsey required two first-round picks to be pried from Jacksonville, La Canfora adds neither player should be expected to bring in the kind of haul fans would anticipate.

Both talents are signed to lucrative extensions. Ramsey’s five-year, $100MM deal (which set the cornerback market in 2020) runs through 2025. Hopkins’ $27.25MM contract runs through 2024. Ramsey, 28, should be expected to command more in a trade compared to Hopkins, 30. Coming off a suspension- and injury-limited 2022, latter has been rumored to be a possible trade chip. Several teams called the Cardinals on Hopkins at the deadline. Ramsey, however, has been a dependable piece in L.A. His exit would leave the Rams vulnerable at corner, considering they have rotated low-cost pieces around Ramsey at the position for years.

A Ramsey trade before June 1 is not especially palatable for the Rams, who are again projected to enter the offseason over the cap. Dealing the All-Pro talent after that date, however, would save the team $17MM. The Rams having not restructured Ramsey’s deal makes a trade something to monitor, The Athletic’s Jourdan Rodrigue notes (subscription required). Here is the latest from the NFC West:

Injuries continue to plague wide receiver Mike Williams and the Chargers this 2022 season. After making his way back from a three-week absence, during which he missed two games, Williams left the team’s loss to the Chiefs last week after only six offensive snaps. The setback that took him out early in last week’s game will now officially keep him out for another game as Los Angeles has ruled him out for this week’s matchup against the Cardinals.

In Williams’ absence, the team will likely go with the same wide receiver mixture they did when he left last week. Keenan Allen will lead the receiving corps alongside Josh Palmer and DeAndre Carter while also getting some reserve snaps from Michael Bandy.

It was originally expected that Williams would miss four games, after the initial diagnosis of his high ankle sprain. Counting last week as an absence, this week will be his fourth missed game, hopefully giving him the rest he needs to help the Chargers make a playoff push.

Here are a few other injury updates from around the league, starting with another injured wide receiver in the AFC West:

After missing the first half of the 2020 season, A’Shawn Robinson may not start the 2021 slate on time. The Rams defensive lineman is set to miss time because of a knee surgery, Sean McVay said Thursday. 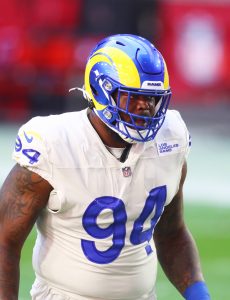 While McVay categorized this as a minor procedure, Robinson is expected to miss a few weeks. With barely two weeks remaining until the Rams’ opener, the prospect of the team needing to make an adjustment to its defensive starting lineup now enters the equation.

A backup on last season’s Rams squad, Robinson is expected to replace Michael Brockers at defensive end in this year’s Los Angeles lineup. Robinson played just 111 snaps last season, one in which he missed eight games. The sides worked out an agreement that prompted Robinson to avoid opting out due to a respiratory issue, but the former Lions starter played a minimal role upon return. The former second-round pick, however, has 37 career starts and stands to be a bigger part of this year’s Rams defense.

Los Angeles is quite light on experience behind Robinson. Among its top five backup defensive end candidates, only one — Marquise Copeland — has played an NFL game. And Copleland suited up for just one contest as a rookie. The Rams have Bobby Brown III and Earnest Brown IV as options, though both are rookies whom the team drafted on Day 3. Second-year UDFA Eric Banks did not see any action last season. Should Robinson need more recovery time, it will be interesting to see who the Rams choose to start alongside Aaron Donald and nose tackle Sebastian Joseph-Day in Week 1.

Defensive tackle A’Shawn Robinson could finally make his debut for the Rams this weekend. The team announced that they’ve activated the veteran to the 53-man roster.

Robinson joined the Rams this past offseason on a two-year, $17MM deal. As Mark Inabinett of AL.com explains, the 25-year-old had previously dealt with a “respiratory situation,” qualifying him as a medical opt-out amid the COVID-19 pandemic. Under that plan, Robinson could have earned $350K for the 2020 season and had his contract officially set to begin in 2021.

Instead, Robinson and the Rams agreed to a reworked deal that saw Robinson start the season on the reserve/NFI list. While the start of his two-year deal was still delayed until the 2021 campaign, Robinson will instead play the 2020 season under a deal that’s based on bonuses.

While the Rams defensive line grouping is set with Michael Brockers, Aaron Donald and Sebastian Joseph as starters, Robinson will provide the team with another depth piece (alongside Morgan Fox and Greg Gaines). Coach Sean McVay told reporters that if Robinson doesn’t play this weekend against the Dolphins, he’ll definitely return following the team’s Week 9 bye.

The 2016 second-rounder had spent the first four seasons of his career with the Lions. After starting all 16 games during the 2017 season, Robinson was limited to only 26 games (16 starts) between the 2018 and 2019 campaigns. Still, he combined for 89 tackles, 2.5 sacks, and two forced fumbles.

After losing several key defensive players, the Rams are now adding to their core. NFL.com’s Tom Pelissero reports (via Twitter) that the team is signing defensive tackle A’Shawn Robinson. It’s a two-year deal worth $17MM.

The 2016 second-rounder had spent his entire career with the Lions. After starting all 16 games during the 2017 season, Robinson was limited to only 26 games (16 starts) over the past two years. Still, he combined for 89 tackles, 2.5 sacks, and two forced fumbles.

The Rams defense will look a whole lot different in 2020. Safety Eric Weddle retired, Cory Littleton, Michael Brockers, and Dante Fowler have all departed in free agency, and the team declined their option on usual slot corner Nickell Robey-Coleman. So far, the organization has added former first-rounder Leonard Floyd and re-signed Austin Blythe.

They’ve also replaced defensive coordinator Wade Phillips with Brandon Staley, so it’s safe to say that side of the ball is getting a complete makeover after Sean McVay’s dissatisfaction with the previous structure became evident.

More than 100 of the 253 draftees from this year’s class have already signed their rookie contracts, and several more are making it official with their respective teams today. Here are the latest draft pick signings from around the NFL:

If Notre Dame linebacker Jaylon Smith gets good news on his medical re-check later this month, his chances of going in the first round of the draft will increase significantly, writes Charlie Campbell of WalterFootball.com. Campbell lists the Bengals, Chiefs, Packers, Texans and Vikings as potential landing spots for Smith, who is on the mend from a torn ACL and MCL that he suffered on New Year’s Day during the Fiesta Bowl. Prior to that catastrophic end to his college career, Smith was seen as a surefire first-rounder – and a high one at that – but his status has been in question since. February’s combine didn’t help matters for Smith, who reportedly failed multiple teams’ physicals.

More of the latest draft news: