The Cardinals have not yet had the pleasure this season of fielding all of their top wide receivers in the same game, but they are expected to take a step towards that goal by activating wide receiver Marquise Brown off of injured reserve, according to team senior writer Darren Urban. The update comes from head coach Kliff Kingsbury who said that Brown is expected to play this Sunday. 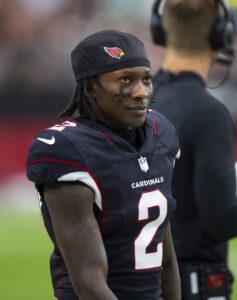 Brown has been on IR since Week 6 recovering from a foot injury that was initially feared to sideline him for the remainder of the season. Days before, Arizona made the move to acquire Panthers wideout Robbie Anderson, who had had a bit of a falling out with his former team. In the immediate aftermath, the move was considered a one-for-one replacement, as many assumed this indicated a long-term absence for Brown. The team had been operating with Brown as their No. 1 receiving option through the first six weeks of the season. The Cardinals’ true No. 1 receiver, DeAndre Hopkins, was serving a suspension and would return just in time for Brown to head to IR.

In the weeks since Brown’s injury, Hopkins has regained his role as the team’s top wideout. Last year’s second-round pick Rondale Moore has been asked to step up in Brown’s absence, as has Greg Dortch during certain moments of the season. Veteran receiver A.J. Green has contributed, as well, but not nearly with the output he has in past years. Anderson’s addition has so far proven joyless, as he’s only been targeted seven times through five games with the Cardinals and totaled a whopping negative-four yards on one reception.

The return of Brown this week helps move Arizona towards a healthy collection of their top wide receivers. Brown should step immediately into a No. 2 role behind Hopkins as Moore sits out with what is expected to be a short-term groin injury and Dortch is considered a gametime decision with a thumb injury. If Dortch is unable to go, Hopkins and Brown will be supplemented by only Green and Anderson.

The passing game should also see a big boost as Kingsbury told the media that it’s looking like quarterback Kyler Murray will be able to start this weekend after missing the past two games with a hamstring injury. Unfortunately, Kingsbury also confirmed that the team will be without starting left tackle D.J. Humphries and starting cornerback Byron Murphy.