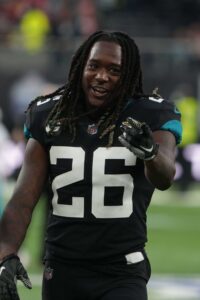 A back injury will stall Griffin’s season. He missed the Jags’ Week 7 loss to the Giants and their Week 3 win over the Chargers. The previous absence involved a hip injury, however.

The former Seahawks draftee is in the second season of a three-year, $40MM contract. One of three secondary starters to arrive during Urban Mayer‘s abbreviated tenure, Griffin, 27, has extended his run of NFL starts t0 72 since coming to Jacksonville. Pro Football Focus graded Griffin as a top-20 corner last season; he sits a bit off that pace (62nd) in a limited sample size this year.

This season will feature Griffin’s lowest participation rate as a pro. Guaranteed to miss at least six games, Griffin came into this season having maxed out with just four absences (2020 in Seattle). The Central Florida alum’s contract, which features $11.5MM in base salary this year and next, does not include any guarantees beyond 2022

Jacksonville also has Meyer-tabbed investments at corner (2021 second-rounder Tyson Campbell) and safety (2021 third-rounder Andre Cisco). The team signed former Rams starter Darious Williams this offseason. Tre Herndon, who was acquired during Tom Coughlin‘s short run back with the franchise, filled in for Griffin against the Giants. In his fifth season with the team, Herndon has been Griffin’s replacement this season. He did not play a defensive snap from Weeks 4-6, when Griffin was healthy, but logged 51 during both the games Griffin missed.

Shaquill Griffin is heading to the Jaguars. The former Seahawks cornerback has agreed to a three-year, $40MM deal, as NFL.com’s Ian Rapoport tweets. 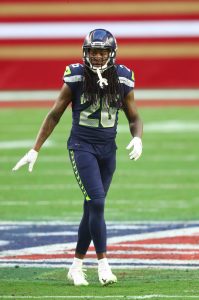 It’s actually a three-year, $45MM deal with $29MM guaranteed, Adam Schefter of ESPN.com tweets. Shortly before the news broke Rapoport tweeted that the Seahawks were making a “hard push” to retain Griffin, so they didn’t just let him walk out the door. A lot of people thought Seattle might tag their top corner to keep him in the fold but they of course did not.

Griffin had previously said he’d like to return to the Seahawks if the business side worked out, which likely means the Jags simply beat them out financially. This will be a bit of a homecoming for the Florida native, as Griffin was born in St. Petersburg and went to UCF for college.

A third-round pick of the Seahawks back in 2017, Griffin just wrapped up his rookie deal and is still only 25. He became an immediate starter in Seattle, and made the Pro Bowl in 2019. Last year he had 12 passes defended and three interceptions in 12 games.

He’ll now join a Jaguars secondary that has some promise, but is still very young. The team is likely hoping Griffin’s presence will help 2020 ninth overall pick C.J. Henderson take the next step.

Following a season in which the Seahawks failed to reach the NFC championship game for a sixth straight year, Russell Wilson set about communicating his goals for what he views as the second half of his career with his camp. Those goals center around returning the Seahawks to a Super Bowl-caliber team. Wilson then brought those to Pete Carroll, per Albert Breer of SI.com, who notes the perennial Pro Bowl passer communicated he wants more say regarding the direction of the team.

Wilson also mentioned to Carroll he would like the Seahawks to make a genuine investment in a high-end offensive lineman, Breer adds. The Seahawks did trade for Pro Bowl left tackle Duane Brown in 2018, but he will turn 36 this year and is signed only through 2021. And they have not otherwise made big moves on their offensive front in recent years. Beyond guard Damien Lewis, the Seahawks could certainly use more help up front. One of Wilson’s goals — a new offensive philosophy — has come to pass, with Breer adding Wilson was “fully on board” with new OC Shane Waldron.

For what it’s worth, the 32-year-old quarterback does not expect to be traded. But he has, as you may have heard, revealed a destination list. And the Bears are taking that quite seriously. Here is the latest from the NFC West: