NOVEMBER 12: The Packers announced on Saturday that Stokes has been placed on IR. ESPN’s Jeremy Fowler notes that the team originally hoped he had only suffered sprains in the affected areas, but that further testing revealed structural damage (Twitter link). Green Bay has used the open roster spot by signing journeyman Corey Ballentine from their practice squad to the active roster.

NOVEMBER 11: The Packers’ defense is expected to be without a key piece for the rest of the season. Matt LaFleur views it likely Eric Stokes will be shut down.

A 2021 first-round pick, Stokes will see ankle and knee injuries end his sophomore NFL season early. This will certainly be a big loss for a Green Bay team in unexpected territory at the nine-game mark. 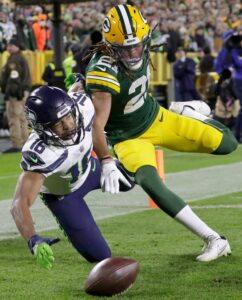 Green Bay devoted considerable resources to stocking its cornerback position this offseason, re-signing Rasul Douglas and extending Jaire Alexander on a corner-record AAV ($21MM). Stokes has been a key part of this puzzle since being taken 29th overall last year. While Alexander missed most of the 2021 campaign and Douglas did not become a key factor until midway through last season, Stokes has been a constant during his career. Sunday will only be the Georgia product’s second missed game as a pro.

Week 9’s Lions matchup has ended up costing the Packers essential personnel. Rashan Gary suffered a torn ACL during the upset loss, and Stokes’ forthcoming absence will shake up Green Bay’s secondary. DC Joe Barry mentioned the prospect of moving safety Darnell Savage into the slot. The team now has an extra player that would help allow for such a transition, in recent waiver claim Johnathan Abram. Still, the Packers being without Gary and Stokes will bring difficulties during a season that has drifted well off course.

Stokes, 23, moved into the Packers’ starting lineup in Week 3 of this rookie season. By Week 5 of last year, Alexander was out of the picture with a significant shoulder injury. Stokes manned one of Green Bay’s boundary positions, joining Douglas. The latter, re-signed on a three-year deal worth $21MM, moved inside this year. Stokes’ injury would allow Douglas to move to the position at which he is more familiar, but the Packers losing two starting defenders in the same week will remind of last season.

The team lost Alexander and Za’Darius Smith early last season. David Bakhtiari and Elgton Jenkins were also out of the mix for Green Bay’s stretch run. That team, which of course featured Davante Adams, navigated the injuries effectively and zoomed to a second straight NFC No. 1 seed. This edition, which is sitting with its worst nine-game mark (3-6) since 2005, stands to be more impacted by major injuries.