A three-year starter with the Broncos, Alexander Johnson did not generate much free agency interest this offseason. Despite past production, the veteran defender lingered on the market for seven-plus months. The Seahawks will provide another opportunity.

Seattle is adding Johnson to its practice squad, Bob Condotta of the Seattle Times tweets. The team also activated L.J. Collier from injured reserve. Wednesday marked the final day Collier could hold an IR-return designation. The former first-rounder remaining on IR after today would have meant his season was over. The Seahawks also signed wide receiver Kevin Kassis to their P-squad. 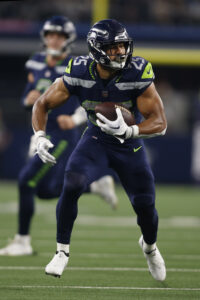 The Seahawks moved on from Bobby Wagner this offseason, giving Cody Barton a starting job alongside Jordyn Brooks. While Brooks continues to work as an every-down player, Barton has seen his role diminish somewhat in recent weeks. Tanner Muse, Nick Bellore and Cullen Gillaspia reside as the backup linebackers on Seattle’s 53-man roster.

Seattle also designated cornerback Tre Brown and running back Travis Homer to return from IR, Condotta adds (via Twitter). Each is back at practice Wednesday.

Brown has been out since November 2021 due to a knee injury. The 2021 fourth-round pick started three games as a rookie, but the Seahawks have made some changes at the position since Brown last played. They have used two 2022 draftees — Tariq Woolen and Coby Bryant — as regulars. Homer, who has been with the Seahawks since 2019, suffered a rib injury against the Falcons in Week 3. Kenneth Walker has taken over as Seattle’s lead back, but Homer has been a backup presence and special teams regular since 2019.

Things haven’t gone according to plan for the Seahawks with respect to former first-rounder L.J. Collier. The defensive lineman has one year remaining on his rookie contract, but might not spend it in Seattle. 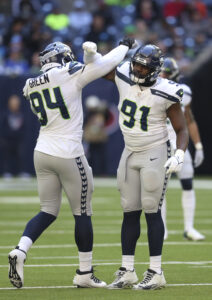 As Bob Condotta of the Seattle Times writes, Collier’s hold on a roster spot is “more uncertain than ever.” The team’s top pick in 2019, he made just three tackles in 11 games as a rookie. Things changed the following season, however, when he started all 16 contests, registering 22 tackles and three sacks. That led to optimism he had turned a corner, but the 2021 campaign was a different story.

The TCU product came off the bench in 10 games last season, an underwhelming point in his brief NFL tenure. As a result, he found himself in trade talks in the weeks leading up to the deadline. Seattle held on to him, but, to no surprise, they declined his fifth-year option this offseason. Training camp has been disappointing and marked by injury, leaving little in the way of optimism amongst the team’s coaches.

“Right now, I mean, it’s difficult,” defensive coordinator Clint Hurtt said when asked about seeing a fit for Collier in the team’s new 3-4 scheme. “He was doing a nice job while he was out there on the field and he was healthy. But it’s a tough deal — I tell guys all the time, ‘It’s hard to make the club when you are in the tub.’ You’ve got to be out there and ready to go. When he’s out there practicing he gives great effort. But it’s tough.”

The Seahawks could rotate the 26-year-old at end and tackle with the new alignment, but Collier would have a number of players ahead of him on the depth chart at each spot. The team’s preseason finale could represent a final opportunity to earn a 53-man roster spot, but head coach Pete Carroll indicated that it remains unclear if the elbow injury he suffered earlier this month will be healed in time for him to play.

Especially is he doesn’t suit up, Collier could become the first Seahawks first-rounder in the Carroll/John Schneider era to fail to see out his rookie deal with the team. Seattle would save $986K by releasing him, but doing so would leave them with a dead cap charge of over $2.4MM. Collier’s name will be one to watch closely when final roster cuts are made next week.

The Seahawks have made the decision to decline the fifth-year option of the rookie contract for defensive end L.J. Collier, according to Charean Williams of NBC Sports. The writing was on the wall for the former first-round draft pick out of TCU, as Collier’s stock has been trending slowly down since his inception in the league. 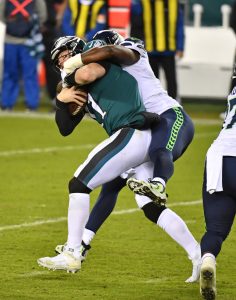 After spending most of his rookie season on the sideline with an injury, Collier started every game in his sophomore season. The full year in a starting position only yielded 3.0 sacks, 4.0 tackles for loss, and 7 quarterback hits.

Throughout the beginning of this past season, Collier was named a healthy-scratch in seven of the first ten games. Newly acquired defensive lineman Robert Nkemdiche subbed in for Collier and, by the end of September, Seahawks defensive coordinator Ken Norton said that Nkemdiche had surpassed Collier on the depth chart.

It’s unclear whether the 26-year-old will be able to drum up any interest in the trade market, after failing to do so during the season last year, but, unless Collier has a 2022 NFL season to remember, it may be his last in Seattle.

Sounds like L.J. Collier is staying put. The Seahawks are not expected to trade the defensive lineman between now and the 4pm ET/3pm CT deadline, according to sources who spoke with Jeremy Fowler of ESPN.com (Twitter link). 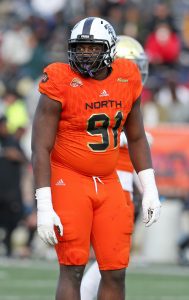 The former first-round pick has hardly seen the field, playing in just two games so far this year. Despite that, Fowler hears that the Seahawks still see him as “valuable.” Reading between the lines, that probably means the Seahawks were underwhelmed with the offers they received.

Collier, the No. 29 overall pick in 2019, hardly played as a rookie but started in all 16 of the Seahawks’ games last year. This year, things have trended in the wrong direction, with Collier ceding ground to Robert Nkemdiche.

For now, the TCU product will remain with the only NFL team he’s ever known. Unless he manages to impress Pete Carroll & Co. this year, you can expect him to be back on the block in the offseason. By then, he’ll have just one year left on his deal with a fairly modest $1.97MM base salary.

It would be an understatement to say that Seahawks DL L.J. Collier has not lived up to his status as a first-round draft pick. The No. 29 overall choice of the 2019 draft played in just 152 snaps in his rookie campaign, though he later said that his rush to return from a preseason ankle sprain may have played a role in that limited usage. But after starting all 16 games and Seattle’s lone playoff contest in 2020, Collier has been active for only two games in 2021. 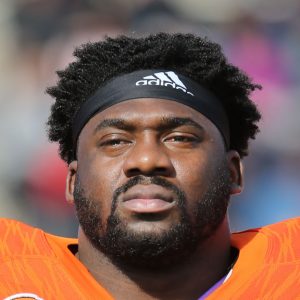 As such, his name has come up in trade conversations, per Ian Rapoport of NFL.com. Rapoport does not say which teams have reached out to the Seahawks, but he does indicate that Seattle entertained discussions before and during the season. Given the disappointing start to his career, the Seahawks cannot expect a significant return in a Collier trade, and rival clubs are surely hoping for a low-risk, high-reward transaction.

Ironically, another former No. 29 overall pick, Robert Nkemdiche, has played a part in Collier’s lack of a role on this year’s defense. Nkemdiche, who was selected by the Cardinals in the 2016 draft and who was nothing short of a bust, was out of football entirely in 2020 and played in only two games in 2019. However, Seahawks DC Ken Norton said at the end of September that Nkemdiche had surpassed Collier on the depth chart.

It is certainly telling that Collier is having a hard time seeing the field for a defense that is ranked dead-last in terms of yards per game and that has been unable to generate a consistent pass rush. Still, plenty of teams need edge help, and it could be that a change of scenery will help the TCU product unlock his potential.