Vikings center Garrett Bradbury is in danger of losing his starting job, as Mark Craig of the Star Tribune writes. Although Bradbury has handled all of the first-team reps in training camp thus far, head coach Kevin O’Connell admitted that the NC State product does not have the gig sewn up. 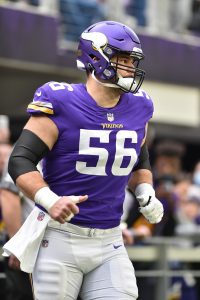 That is largely a result of Bradbury’s struggles in pass protection. Over his first three years in the league, his Pro Football Focus pass-blocking grades have ranked last, last, and second-to-last among centers. He is more accomplished as a run blocker, and O’Connell made sure to mention Bradbury’s running game prowess while acknowledging the need for him to improve in pass pro.

“[Pass-blocking is] where we’re challenging him each and every time; technique, technique,” O’Connell said. “He’s got a good anchor when he’s got his feet underneath him. I think he has the strength to hold up. I think he has the technique to hold up. I think we can do some things with how we protect to try to limit some of the [one-on-one] situations by how we scheme up certain fronts.”

Bradbury missed four games in 2021 but has otherwise started every game for the Vikings since turning pro in 2019. Selected in the first round (No. 18 overall) of that year’s draft, his struggles in protecting the quarterback forced Minnesota to decline his fifth-year option for 2023, thereby turning 2022 into a platform year.

As such, Bradbury’s earning power hangs in the balance. A marked improvement in his game could lead to a lucrative multi-year pact, whereas a demotion could see him hit free agency after having spent a full season as a reserve and with major questions marks about his viability as a starting pivot.

If he ends up ceding his starting role, free agent acquisitions Austin Schlottmann (seven career starts) and Chris Reed (29 career starts) could fill the void, although Reed has never played a regular season game at center. Schlottman has been working as the second-team center.

O’Connell believes that Reed can handle a center’s duties, but one would imagine that his preference would be to have Bradbury step up and seize the job. He has yet to do that, having been burned repeatedly by the Vikings’ interior pass rush in the first several weeks of camp.

As expected, the Vikings will be making center Garrett Bradbury an impending free agent. Per ESPN’s Jeremy Fowler (on Twitter), the Vikings won’t pick up the offensive lineman’s fifth-year option. We heard late last month that this was the likely outcome.

Bradbury would have been eligible to earn a $13.2MM 2023 salary via the fifth-year option. As our own Sam Robinson recently pointed out, because all offensive linemen are grouped together under the franchise tag system, the foundation for the fifth-year option setup, centers and guards see their option salaries spike because of tackles’ higher wages.

As a result, the Vikings thought that $13MM+ salary was too high for a player of Bradbury’s caliber. However, their decision to decline the fifth-year option doesn’t necessarily mean the player isn’t in their future plans.

Bradbury was the 18th-overall pick in the 2019 draft, and he’s started each of his 45 games since entering the NFL. Pro Football Focus hasn’t been particularly fond of his performance in the NFL, and following a 2021 season where they ranked Minnesota’s O-line 23rd, the site had Bradbury as the second-worst player on that unit.

The Vikings are planning to make 2022 a contract year for Garrett Bradbury. They are expected to decline the fifth-year option on their center’s deal, according to the St. Paul Pioneer Press’ Chris Tomasson.

Because all offensive linemen are grouped together under the franchise tag system, the foundation for the fifth-year option setup, centers and guards see their option salaries spike because of tackles’ higher wages. Despite having not made a Pro Bowl in three seasons, Bradbury would be eligible for a $13.2MM 2023 salary.

It is not surprising to see the Vikings punt on that payment, though this should not necessarily be viewed as the team shutting down the prospect of a long-term future with the 2019 first-round pick. A Day 1 starter for the Vikings, Bradbury has lined up with the team’s first-string offensive line 45 times. Grading Minnesota’s O-line 23rd last season, Pro Football Focus assigned Bradbury the second-worst grade on that unit. His 2019 or ’20 grades did not place him near the top of the center position, either, certainly raising the stakes for his upcoming contract campaign.

Minnesota has just one high-end veteran contract (right tackle Brian O’Neill‘s) on its O-line, and this Bradbury decision will allow the Vikings to continue keeping costs low up front for the time being. The team has left tackle Christian Darrisaw and left guard Ezra Cleveland signed to rookie deals. If the Vikings are iffy on Bradbury’s long-term future, the upcoming draft becomes an avenue to address the spot.

The Vikings’ draft class is almost wrapped up. On Tuesday, the Vikings announced the signing of first-round center Garrett Bradbury. 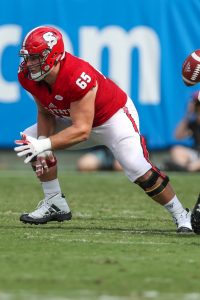 Bradbury, a North Carolina State product, was taken with the No. 18 overall pick last month. In his final year on campus, Bradbury won the Dave Rimington Trophy, which is awarded to the best center in college football. The converted tight end is believed to be NFL-ready thanks to his core strength and blocking IQ.

With Bradbury signed, the Vikings have just one straggler left in Air Force long snapper Austin Cutting. Cutting, a seventh-round pick, reported to rookie minicamp after signing an injury protection agreement instead of his rookie contract. Cutting says he’s not signing “out of respect to letting the Air Force eventually give a final decision of if he can play in 2019.”