The Vikings will welcome back a key member of their defense when they take on the Jets tomorrow. Defensive tackle Dalvin Tomlinson is set to return in Week 13, as noted (on Twitter) by ESPN’s Kevin Seifert. 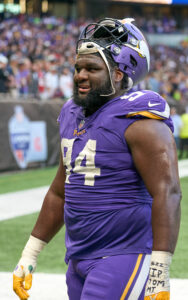 The 28-year-old has been battling a calf injury, and has been sidelined since Week 9 as a result. He has made steady progress in recent days while practicing, though, which led to optimism that he would be available to suit up on Sunday against the Jets. His presence will be felt along the Minnesota’s defensive line.

Tomlinson has been a full-time starter in each of his two years with the Vikings, after he signed a $22MM deal in free agency last offseason. In 2022, the former Giants second-rounder has totaled 20 tackles, 1.5 sacks and one forced fumble. Along the way, he has logged a career-high 64% snap share, demonstrating his importance to a Vikings d-line which parted ways with veteran Michael Pierce in the spring.

In other injury news, rookie cornerback Akayleb Evans has cleared concussion protocol, setting him up to play and start on Sunday as well. That will be a welcomed development, given the fourth-rounder’s added importance for the remainder of the campaign in the wake of Andrew Booth‘s season-ending knee injury. Head coach Kevin O’Connell said that Booth’s surgery consisted of repairing his meniscus, which will lengthen his recovery timeline (Twitter link via Ben Goessling of the Minneapolis Star Tribune). That will leave significant expectations for Evans for the foreseeable future, as he steps into a starting role on a secondary which is surrendering a league-worst average of 276 passing yards per game.

Left tackle Christian Darrisaw is still in the concussion protocol, per O’Connell. That will lead to a second consecutive missed game for the 2021 first-rounder; no timetable is in place for him to return to action at this point. Minnesota will likely turn to 2020 sixth-rounder Blake Brandel to make his second consecutive start this week, one in which the Vikings could clinch the NFC North title. 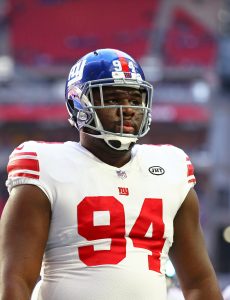 Tomlinson has been a consistent starter since joining the Giants in 2017. The defensive lineman has started each of the Giants’ 64 games over the past four years, averaging 26.6 tackles and two sacks per season. He had another solid season in 2020, finishing with career-highs in tackles for loss (eight) and QB hits (10). Pro Football Focus ranked Tomlinson as the 25th-best interior defender out of 126 qualified players in 2020.

While there were reports that the Giants wanted to retain Tomlinson, there were also rumblings that the organization was shopping the defensive lineman during last year’s trade deadline; the Packers were mentioned as a potential suitor for the nose tackle.

The Vikings have apparently been in the market for defensive linemen. We heard whispers earlier today that they were a potential suitor for Trey Hendrickson, who ultimately signed with the Bengals. Despite the Tomlinson signing, it sounds like Minnesota is still prepared to roll with defensive tackle Michael Pierce next season.

This won’t come as a big shock, but the Giants want to re-sign defensive tackle Dalvin Tomlinson, as Ralph Vacchiano of SNY.tv writes. New York, however, has virtually no cap room at the moment, so GM Dave Gettleman will have his work cut out for him in trying to bring back Tomlinson and fellow D-lineman Leonard Williams.

It won’t be overly difficult to clear between $20MM-$30MM of cap space with a few obvious releases and restructures, but it’s not as though Tomlinson and Williams are Big Blue’s only priorities. The team still has major holes at wide receiver, O-line, and cornerback, so it remains to be seen if Gettleman will be able to keep his defensive front intact.

Tomlinson, Pro Football Focus’ 25th-best interior defender out of 126 qualified players in 2020, could pull down a multi-year pact worth $8MM-$10MM per season. But Vacchiano suggests that he might also be one of those players whose earning power will be weakened as a result of the reduced salary cap, so the 2017 second-rounder may opt for a one-year pact with an eye towards a return trip to free agency in 2022, when the cap may increase dramatically.

Of course, a one-year deal means that the Giants would not be able to spread out any of Tomlinson’s cap charges. So while Vacchiano believes that such an arrangement could represent New York’s best chance to bring Tomlinson back, that might only be true if his market does not bear much fruit.

Williams, meanwhile, is still shooting for the $20MM/year contract he has been seeking for some time, and given his 2020 breakout, there’s a good chance he’ll get it. He was finally able to start converting QB hits into sacks last season, finishing the year with 11.5 sacks and grading out as PFF’s 15th-best interior defender. His abilities to get to the quarterback and to stop the run make him a complete player, and even though there is some concern that he could regress to the level of solid-but-not-great play he displayed with the Jets, he is not likely to get anything less than an $18MM AAV with up to $60MM in guarantees.

Vacchiano confirms a report from last March that the Giants were unwilling to offer a long-term deal to Williams that averaged his 2020 franchise tag value of $16.1MM. At the time, that made perfect sense from New York’s perspective, but Williams was unwilling to go that low, so he chose to bet on himself (and won). This year, a franchise or transition tag for either Williams or Tomlinson would seem to be cost-prohibitive, though Ian Rapoport of the NFL Network (video link) says the $19.3MM franchise tag for Williams should not be ruled out (which makes sense if Williams is looking at a $20MM/year long-term deal).

Paul Schwartz of the New York Post unsurprisingly says Williams must be retained, but like Vacchiano, he concedes that keeping Tomlinson could be a little tougher. And assuming Williams is brought back, the club will certainly not be able to be as active in free agency as it was last year, even though the Giants do not have any other free agents of their own that qualify as major priorities. As such, New York may need to make savvy, under-the-radar signings to boost its O-line, especially at right tackle. Last year’s 16-game RT starter, Cameron Fleming, will not be re-signed as a starter, Schwartz writes.

The Packers may have been trying to pry wide receiver Will Fuller from the Texans in advance of the trade deadline, and they were also looking to bolster their defense. According to Ian Rapoport of NFL.com (via Twitter), Green Bay offered a mid-round pick to the Giants in exchange for defensive tackle Dalvin Tomlinson.

New York, though, declined the offer, even though Tomlinson is playing out the final year of his rookie contract and despite the fact that the two sides have not made much progress in contract talks. As Dan Duggan of The Athletic observes, head coach Joe Judge did not want to trade “foundational pieces,” and he clearly sees Tomlinson as a key part of the team’s future (Twitter link). Duggan says the club also rejected overtures for tight end Evan Engram, and Adam Schefter of ESPN.com reports that Big Blue was not going to deal Engram for anything less than a first-round pick.

The decision to keep Tomlinson makes plenty of sense. The Giants selected him in the second round of the 2017 draft, and unless they were convinced they would be unable to re-sign him, dealing a young, talented interior defender for a mid-round selection wouldn’t necessarily have aided in the club’s rebuilding process.

You can’t fault Green Bay for making a play for Tomlinson, though. The Packers are gearing up for a playoff push, but their run defense is among the worst in the NFL, and the 26-year-old Alabama product would have gone a long way towards solidifying their defensive front. Pro Football Focus currently ranks Tomlinson as the 14th-best interior defender in the league, and though he has just one sack this year, his pass rushing grade is almost as high as his run defense score.