A few more recent contract figures to pass along:

The Bengals’ defensive overhaul continues. On Wednesday, the Bengals agreed to terms with safety Vonn Bell, according to Mike Garafolo and Ian Rapoport of NFL.com (on Twitter). Once finalized, it’ll be a three-year deal.

Garafolo adds in a separate tweet that the contract is worth $18MM, $7MM of which will be paid out in 2020. 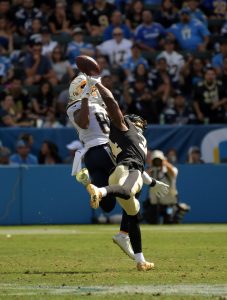 Bell, 25 (26 in December), entered the league as a second-round pick of the Saints back in 2016. He spent four years there, up until now. There was some chatter of the Saints re-signing him, but Sean Payton & Co. elected to instead bring back old friend Malcolm Jenkins.

In 2019, Bell started in all 13 of his games and finished out with 89 tackles, 1.5 sacks, two forced fumbles, five fumble recoveries, and one interception. Now, he’ll move on to the Bengals where he joins fellow newcomers D.J. Reader, Trae Waynes, Xavier Su’a-Filo, Mackensie Alexander, and Josh Bynes. At safety, he’ll be accompanied by Jessie Bates, Shaun Williams, and likely a couple more names between now and the start of the season.

Vonn Bell could wind up changing teams while staying in the same division. The Panthers have shown interest in the Saints’ free agent safety, according to Josina Anderson of ESPN.com (on Twitter). The incumbent Saints are also hoping to keep him, she adds.

Bell, an Ohio State product, has spent his entire career with the Saints since entering the league in 2016. The former second-round pick has 61 appearances and 45 starts to his credit. Last year, he started in all 13 of his games for New Orleans and tallied 89 stops plus 1.5 sacks.

For his work, Pro Football Focus ranked him as the No. 47 safety in the NFL. With the Saints, he’s helped contain the run, resulting in a 43-game streak without allowing any single rusher to hit 100 yards. He’s also displayed his hard-hitting ability with seven career forced fumbles.

The Saints would like to keep Bell, but they do have Chauncey Gardner-Johnson waiting in the wings. The Panthers, meanwhile, could use help in the secondary after losing James Bradberry to the Giants in free agency.

Jadeveon Clowney has drawn interest from other teams — the Colts and Giants among them — but the Seahawks remain interested in bringing him back. However, they may not be ready to pay top dollar for the former No. 1 overall pick. The Seahawks are trying to extend Clowney before he hits free agency March 18, but Jeremy Fowler and Dan Graziano of ESPN.com report the franchise is unlikely to compete with a true top-market price (ESPN+ link). If the bidding goes into the $18-$20MM-per-year range, which it almost certainly will given other teams’ franchise tags keeping edge players off the market, the Seahawks are not expected to go there. This would mean the Seahawks will have lost two standout edge rushers in two years, after trading Frank Clark to the Chiefs. Seattle, which did not see much from first-round defensive end L.J. Collier last season, is set to carry more than $44MM in cap space.

Both the Colts and Titans are interested and are not afraid of Clowney’s asking price, per Fowler and Graziano. A new entry in the Clowney sweepstakes, Tennessee could use edge help but seemingly has key issues to sort out involving Ryan Tannehill (or a replacement) and Derrick Henry first.

Here is the latest from the free agency market, shifting to one of this era’s top cornerbacks:

The Saints acquired the 61st pick from the Patriots in exchange for Nos. 78 and 112, reports Jeff Howe of the Boston Herald (Twitter link). New Orleans then selected Ohio State safety Vonn Bell. The Patriots, meanwhile, now have three third-round picks.

Bell will join a a Saints defense that allowed the second-most passing yards in the NFL last season and hauled in just nine interceptions. Bell picked off nine passes himself during his three-year tenure with the Buckeyes and should play a prominent role in New Orleans’ defensive backfield.

Earlier tonight, Peter Schrager of FOX Sports took to Twitter to pass along his latest draft buzz. Here’s a rundown of everything: