Carl Nassib has found a new gig. The defensive end has signed a one-year deal with the Buccaneers, according to ESPN’s Adam Schefter (on Twitter).

It’s a one-year deal worth the league minimum, Greg Auman of The Athletic tweets. Nassib’s cap number will be just $1.05MM in 2022. He will collect a $152.5K signing bonus. 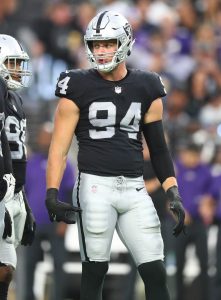 After collecting 12.5 sacks during his two seasons with the Buccaneers, Nassib inked a three-year, $25MM deal with the Raiders in 2020. Following his first season in Las Vegas, Nassib made headlines when he became the first openly gay active player in the NFL. The defensive end ended up getting into 27 games during his two seasons with the organization, compiling 49 tackles and four sacks. Had Nassib played enough defensive snaps in 2021 to qualify for Pro Football Focus’ rankings, he would have been listed as a middle-of-the-road edge rusher. The Raiders ended up cutting the 29-year-old back in March, creating $8MM in cap savings.

Nassib spent the 2018 and 2019 seasons in Tampa Bay, and today’s move will reunite him with Todd Bowles, who served as his defensive coordinator during the 2019 campaign. While Nassib mostly served as an edge rusher during his stint with the Raiders, there’s a good chance he’ll return to linebacker in Tampa Bay.

As ESPN’s Jenna Laine writes, Cam Gill recently went down with a Lisfranc injury, and the Buccaneers were already relying on an inexperienced starting LB in former first-round pick Joe Tryon-Shoyinka, who is slated to replace Jason Pierre-Paul. Nassib can help provide some veteran stability at the position, although there’s probably little chance he cracks the starting lineup.

Although early June no longer serves as a stretch in which a wave of veterans are released for cap-saving purposes, June 2 still serves as an important calendar date for certain teams annually. Nine teams qualify as beneficiaries this year.

Here are 2022’s post-June 1 cuts, along with the belated cap savings the teams picked up Thursday:

As detailed in PFR’s glossary, post-June 1 cuts spread dead-money hits over two years. These teams will be taking on dead money this year and next. A few of the 2023 hits are substantial, but the league’s cap-space hierarchy changed significantly Thursday as well.

Because of multiple restructures, Raiders will carry $9.9MM in Littleton dead money next year. The Cowboys will take on $8.7MM in 2023 for cutting Collins, while the Titans will be hit with $8.4MM for their Jones release. Cleveland, which just gave David Njoku a $14.2MM-per-year deal, will carry a $7.5MM dead-money cost next year due to shedding Hooper’s eight-figure-AAV deal early. The Eagles will be tagged with $11.5MM for their Cox cut, with Corry noting that is the net difference because of a $3.2MM salary cap credit regarding Cox’s 2022 bonus proration. Philadelphia re-signed the perennial Pro Bowler on a one-year, $14MM deal.

Hooper’s release pushes Cleveland’s cap space to beyond $40MM; the Browns’ overall cap-space edge is now a whopping $15MM. That should help the team address multiple needs ahead of training camp. Other teams have more options now, too. As of Thursday, the Raiders hold the NFL’s third-most cap space ($22.5MM, per OverTheCap). The $10MM the Cowboys saved moves them up to fourth in cap space ($22.49MM), while the Bears ($22.2MM), Commanders ($18.4MM) and Seahawks ($17MM) now sit fifth, sixth and seventh.

A handful of this year’s post-June 1 cut crop joined Cox in taking advantage of the modern setup, which allows these cap casualties to become free agents immediately — rather than waiting until June to hit the market. In place since the 2006 CBA, this adjustment let veterans loose early while keeping their cap figures on teams’ payrolls through May. Collins quickly joined the Bengals, while Littleton landed with the Panthers, Hooper signed with the Titans, and Phillips returned to the Bills. The remainder of this group remains unsigned. The savings this lot of teams inherited Thursday may help some of these players’ causes in free agency.

The Raiders are releasing defensive end Carl Nassib (Twitter link via Adam Schefter of ESPN.com). Previously, Nassib has one season to go on his three-year, $25MM deal.

Nassib made national news last summer when he announced that he was gay, making the 28-year-old the first active NFL player to do so.

“The NFL family is proud of Carl for courageously sharing his truth today,” commissioner Roger Goodell said afterwards. “Representation matters. We share his hope that someday soon statements like his will no longer be newsworthy as we march toward full equality for the LGBTQ+ community. We wish Carl the best of luck this coming season.”

Later that year, following the leak of Jon Gruden‘s emails, Nassib took personal time away from the team. In 2021, Nassib appeared in 13 games as a reserve with 21 tackles and 1.5 sacks. While he was productive in Las Vegas, his numbers didn’t match his previous work. Between 2018 and 2019 with the Bucs, Nassib notched 12.5 sacks. With the Raiders, he had just four across the last two seasons.

The Raiders will designate Nassib as a post-June 1 cut, enabling them to save $8MM against the 2022 cap (Twitter link via Schefter).

In a post on Instagram, Raiders defensive end Carl Nassib announced that he was gay, making the 28-year-old the first active NFL player to come out as gay. Nassib also made an $100K donation to the Trevor Project, a foundation which provides “crisis intervention and suicide prevention services to lesbian, gay, bisexual, transgender, queer & questioning (LGBTQ) young people under 25.”

Support for Nassib was wide spread:

“The NFL family is proud of Carl for courageously sharing his truth today,” commissioner Roger Goodell said in a statement. “Representation matters. We share his hope that someday soon statements like his will no longer be newsworthy as we march toward full equality for the LGBTQ+ community. We wish Carl the best of luck this coming season.”

“Our union supports Carl and his work with the Trevor Project is proof that he – like our membership – is about making his community and this world a better place not for themselves, but for others,” said NFL Players Association Executive Director DeMaurice Smith (via Twitter).

Raiders owner Mark Davis also showed his support for Nassib, noting that the announcement “doesn’t change my opinion of Carl as a man or as a Raider” (via Sam Farmer of the LA Times on Twitter).

Nassib joined the Raiders last offseason on a three-year, $25MM deal with $17MM guaranteed. He finished his first season in Las Vegas with 28 tackles, 2.5 sacks, and nine QB hits in 14 games (five starts).

More news from around the NFL:

For several months, the Broncos have been linked to adding a quarterback that would at least provide Drew Lock with competition. No such move has transpired, but James Palmer of NFL.com notes GM George Paton is doing extensive research on this year’s crop of QB prospects (video link). Paton attended Trey Lance‘s pro day and mentioned last month that the team will consider a passer at No. 9 overall. However, Palmer expects the Broncos to also be in play for a trade-up — should the team become infatuated with one of the available arms.

While the Broncos are doing homework on all five of the top quarterbacks, they realistically only have a shot at two of them. This draft is, as of now, expected to begin with Trevor Lawrence going to the Jaguars and Zach Wilson heading to New York. Now in possession of the No. 3 overall pick, the 49ers have been linked to Mac Jones more so than Lance or Justin Fields. The Broncos believe Lock will improve next season and do not want to make a quarterback transaction for the sake of making one. Lock was without top receiver Courtland Sutton for most of last season and was transitioning to a new offense without the benefit of onsite offseason work, but he ranked 29th in QBR and led the league in INTs despite missing three games.