Safety Logan Ryan was signed by the Buccaneers in March, one day after being released by the Giants. Per Dan Duggan of The Athletic, Ryan has filed a grievance against Big Blue (Twitter link). 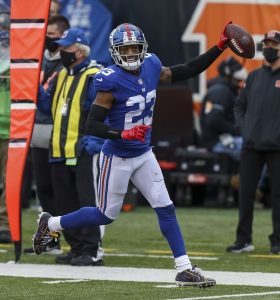 The Ryan release was not necessarily part of new Giants GM Joe Schoen‘s efforts to shed payroll and make his club cap-compliant; the transaction was only expected to net about $775K of cap space for 2022, since Ryan was not designated a post-June 1 cut. Instead, parting ways with Ryan had more to do with the fact that he is 31 and was deemed to be an imperfect fit in New York’s new defensive regime (and it did clear $12.25MM off the books for 2023).

Ryan was due an $8.5MM salary in 2022, and $5.5MM of that figure was fully-guaranteed. The remaining $3MM, which is at issue in the grievance, was guaranteed for injury. As Duggan reports in a separate tweet, Ryan underwent postseason finger surgery, so his position is that the injury guarantee should kick in and that he is entitled to an additional $3MM. Until the matter is resolved, 40% of the disputed amount, or $1.2MM, will remain on the Giants’ cap.

Schoen has just two safeties on the roster at the moment (2019 fourth-rounder Julian Love and 2020 second-rounder Xavier McKinney). The Giants currently hold the Nos. 5 and 7 overall picks and will therefore have a good chance to draft star Notre Dame safety/do-it-all weapon Kyle Hamilton, but with plenty of other holes at more valuable positions, the club may choose to pass on the former Golden Domer and address its safety needs with later picks or in post-draft free agency.

Ryan, meanwhile, went from a rebuilding team to a championship contender. By reuniting with former Patriots teammate Tom Brady in Tampa, Ryan will have a chance to add a third Super Bowl ring to his collection as part of a safety group that includes Antoine Winfield Jr., Mike Edwards, and fellow free agent acquisition Keanu Neal.

Prior to the Browns coming in with their stunning offer, Deshaun Watson was speaking with veteran free agents about teaming up with the Falcons. Watson spoke with Leonard Fournette and Jarvis Landry about playing with him in Atlanta, Jeremy Fowler of ESPN.com notes (ESPN+ link). By the evening of March 17, the Falcons believed they had won the Watson sweepstakes, Fowler adds, and the quarterback was attempting to upgrade the team’s pass-catching corps. Cleveland’s fully guaranteed $230MM proposal changed everything, and Landry is now a possibility to return to the Browns. The eight-year veteran wide receiver visited the Falcons previously, but the team’s outlook has changed considerably since. Fournette re-signed with the Bucs this week.

Watson is a Brown, and Matt Ryan is now a Colt, leaving the Falcons with a record dead-money total and a rebuild to orchestrate. “We’re taking it on the chin this year,” Falcons GM Terry Fontenot said of the $40MM Ryan cap hit (via ESPN’s Michael Rothstein, on Twitter), but noted that the outlook will brighten in 2023. Here is the latest from the NFC South:

The Buccaneers are rolling out the pewter carpet for Tom Brady. On Friday, the Bucs agreed to sign defensive back and former Brady teammate Logan Ryan, according to sources who spoke with NFL.com’s Ian Rapoport (Twitter link). 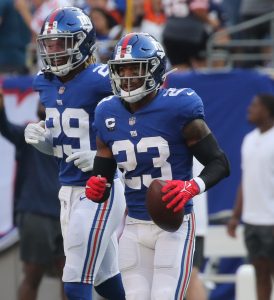 Ryan was released by the Giants on Thursday, bringing his three-year, $31MM deal to an early end. The 31-year-old wasn’t a fit for the new regime, but he was still productive last year as he notched 117 tackles, two tackles for loss, two forced fumbles, and eight passes defensed across 15 games.

The veteran first made his name in New England, where he spent four seasons with Brady and the Pats. Along the way, he won two Super Bowls and positioned himself for a three-year, $30MM deal with the Titans. He enjoyed one of his most productive seasons in 2019, setting career-highs in tackles (113), passes defended (18), sacks (4.5), and forced fumbles (four), but the Titans didn’t want him back. That led him to the Giants, where he switched to safety and notched 200+ tackles over two seasons.

The terms of the deal are not yet known, but Ryan is still set to collect $5.5MM from the Giants this year, so the Bucs probably didn’t have to break the bank for him.

The Giants are releasing defensive back Logan Ryan (Twitter link via NFL.com’s Ian Rapoport). The Giants will not classify this as a post-June 1 designation, according to Dan Duggan of The Athletic (on Twitter), which means they’ll absorb the full dead money hit in 2022.

Ryan, 31, first joined the Giants on a one-year, $7.5MM deal. Towards the end of the 2020 season, the Giants re-upped him on a three-year, $31MM extension. That deal has now been cut short — instead of making $9.25MM with the G-Men this year, Ryan is back on the market.

Meanwhile, the Giants’ new regime still has to figure out what to do with James Bradberry. Teams have made trade inquiries on Dave Gettleman‘s high-priced addition, but the offers have been underwhelming so far. The Giants could keep Bradberry, table trade talks until sometime after the draft, or just release him outright. Cutting Bradberry would save the team upwards of $10MM in 2022.

Christmas Day tends to be pretty quiet in the NFL. But, on December 25th of last year, the Giants gave Logan Ryan the biggest gift he could have possibly asked for. That morning, the veteran safety inked a three-year, $30MM extension with $11.5MM fully guaranteed at signing.

[RELATED: Giants To Consider Kevin Abrams As Next GM]

It was a solid step up for Ryan, who encountered an oddly quiet market just a few months prior. Despite several seasons as a high-level starter, Ryan was forced to settle for a one-year, $7.5MM contract with the Giants. It’s not like he had declined either — Ryan graded as one of the league’s top slot defenders in 2019, per Pro Football Focus, and led all NFL corners with 113 tackles. Finally, Ryan had the $10MM/year deal he was seeking all along.

It wasn’t a banner year for the Giants on the whole, but Ryan was playing well on an individual level. At the time of signing, the Rutgers product had 83 stops, one interception, one sack, three forced fumbles, and nine passes defensed through 14 games.

The Giants were happy to reward his performance, but he’ll have to prove himself all over again for a new regime after Dave Gettleman steps down as GM. Ryan, 31 in February, has slumped along with the rest of the G-Men this year. He currently ranks just 71st out of 91 qualified safeties, per PFF, with zero interceptions or sacks on the year. But, thanks to his extension, his spot is more or less secure for 2022. Slated to carry a $12.225MM cap hit, the Giants would save just $775K by releasing him.

While the Giants are welcoming back one cornerback, another defensive back will be sidelined for the next few weeks. Paul Schwartz of the New York Post tweets that cornerback Darnay Holmes is heading to injured reserve. Meanwhile, the team will be activating veteran defensive back Logan Ryan from the reserve/COVID-19 list (via Schwartz on Twitter).

Holmes suffered a rib injury on Sunday that required an overnight stay at the hospital. Now, the 23-year-old will be forced to miss at least the next three Giants games. Holmes was a fourth-round pick by the Giants in 2020, and he started five of his 12 appearances as a rookie. The cornerback has started four of his 11 games this season, collecting 29 tackles, two passes defended, and one interception.

It’s been a few seasons since Ryan played cornerback, but the Giants will still welcome back their veteran safety with open arms. The 30-year-old has missed the past two games for New York, but he otherwise started each of the team’s first nine games. Ryan has collected 72 tackles and two forced fumbles this season.

The hits keep coming for the Giants. Earlier this evening, we learned that quarterback Daniel Jones was likely to be sidelined this weekend as he recovers from a neck strain.

It’s an especially Merry Christmas for Logan Ryan. On Friday morning, the Giants agreed to a three-year, $31MM extension with the veteran safety, according to NFL.com’s Ian Rapoport (on Twitter).

The deal includes $20MM in guarantees, assuring that Ryan will be a part of the team’s plans beyond 2021. It’s not immediately clear how much of that $20MM figure is guaranteed at signing, but a good portion of that sum should be locked in for Year One.

Ryan, 30 in February, hooked on with the Giants just before the start of the season. His history with head coach Joe Judge and defensive coordinator Patrick Graham helped to bring him to New York, but his talent and versatility were the real drivers.

The one-year, $7.5MM deal paid off for the G-Men, and they’re now rewarding him with the $10MM/year figure that he had been seeking throughout the offseason. In 2019, Ryan led all NFL corners last season with 113 tackles. He graded as one of the league’s top slot defenders, per Pro Football Focus, but ultimately had to make the switch to safety.

It hasn’t been a banner year for the Giants on the whole, but Ryan has been solid throughout. Through 14 games, the Rutgers product has 83 stops, one interception, one sack, three forced fumbles, and nine passes defensed to his credit. Now, he has security with a contract that could take him all the way to the end of his career.

Cam Newton was reported Monday to be asymptomatic after his positive COVID-19 test, and with nothing changing on that front Tuesday, the Patriots quarterback could return to practice as soon as Thursday. While no other players on New England’s active roster tested positive, the team placed practice squad defensive tackle Bill Murray on its reserve/COVID-19 list Tuesday. Murray did not make the trip to Kansas City, per NBC Sports Boston’s Tom Curran (on Twitter), but Pro Football Talk’s Mike Florio notes the young defender did stay at the hotel near Gillette Stadium with teammates previously.

Here is the latest from the AFC East, moving first to the Dolphins’ quarterback situation: