The Giants have been one of the most active teams this offseason in terms of creating cap space. At the start of the process, new general manager Joe Schoen made it clear he wanted to avoid restructures as a means of accomplishing that goal, but the team has done just that for the first time. New York has converted $8.965MM of cornerback Adoree’ Jackson’s salary into a roster bonus, while adding a void year to his deal in 2024. (Twitter link via ESPN’s Field Yates). 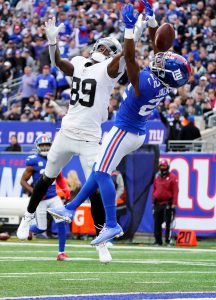 The move creates just under $6MM in cap space for the Giants. Given how dire their financial situation was before today – with less than $1MM to spare – it was clear New York would have to continue carving out more room. As many have noted, however, this will still only be the first of many such moves the Giants need to make to be able to afford their draft class, among other things.

How many more deals need to be re-worked will depend in large part, of course, on how the team handles fellow corner James Bradberry. With a cap hit of nearly $22MM next year, Bradberry has long been on the trade block, though most interested teams are waiting to see if he is released outright. While the Giants could also flatten that cap charge through an extension, they still face a long road to true flexibility.

Jackson, 26, was one of the top free agents one year ago after his four-year tenure with the Titans. He signed a three-year, $39MM deal with the Giants to bolster their secondary. In 13 games, he totalled 62 tackles, one interception and eight pass breakups. Given the increases to his cap number and dead money charges this restructure pushes into the remaining years on his deal, the team is clearly comfortable with keeping him in the fold for the foreseeable future.

One of the biggest names on the free agent market has been officially scooped up. The Giants will sign cornerback Adoree’ Jackson, sources told Ian Rapoport of NFL Network (Twitter link).

It’s a three-year deal worth a whopping $39MM, Adam Schefter of ESPN.com tweets. The contract comes with a signing bonus of $13.5MM, full guarantees of $26.5MM, and incentives can bring the total value up to $44.5MM, Schefter tweets. It’s the culmination of a several days long courtship that saw the Giants go all-out in their recruitment. Jackson was also scheduled to meet with the Eagles later this week, but he’ll be canceling that now.

Jackson was cut by the Titans last week before the fifth-year option on his rookie contract became guaranteed. He had been set to cost Tennessee $10.2MM under that fifth-year option, so his release actually ended up getting him a raise as his new pact has an AAV of $13MM. A number of other teams reportedly showed interest, including the Rams, Chiefs, Raiders, and Cardinals.

Giants GM Dave Gettleman, whose job status beyond 2021 is tenuous at best, has been aggressive in what could be his final free agency if things don’t go well this season. The team just committed a large contract to Kenny Golladay over the weekend.

As many Giants writers were quick to point out, this signing likely means that even more contract restructures are coming to clear space. Jackson, a USC product, was drafted 18th overall in 2017. He became a starter as a rookie with the Titans, and also returned punts his first two years.

This past season, a knee injury limited him to only three games. Jackson only has two interceptions in 46 career games, but does have 33 passes defended. He’s played well at times and struggled at others, but is capable of being a very solid player. He’s still only 25, and will slot in opposite James Bradberry at corner for the Giants.

Eagles To Meet With Adoree’ Jackson

Adoree’ Jackson is going on an NFC East tour. After his scheduled meeting with the Giants, the former Titans cornerback will get together with the Eagles (Twitter link via ESPN.com’s Adam Schefter). In addition, the Rams, Chiefs, Raiders and Cardinals have also shown interest, according to Mike Jones of USA Today (on Twitter).

[RELATED: Giants To Meet With Jackson]

The Eagles have yet to add a cornerback this week, even though it’s one of their biggest needs. The group is headlined by Darius Slay, but they don’t have much after that. Also, Slay was less-than-stellar in 2020. With Avonte Maddox set to return to his preferred slot duties, the Eagles will need to find a CB2 one way or another. Jackson, who looked to be one of the league’s best young corners in 2019, wouldn’t be a bad choice.

Jackson would also be a good fit for the Rams, who have yet to make their mark in free agency this year. They probably won’t be able to offer him the best deal, but the USC product could be swayed by the opportunity to return home.

Giants To Meet With Adoree’ Jackson

Adoree’ Jackson is set to meet with the Giants (Twitter link via NFL.com’s Ian Rapoport). This marks the first known visit for the former Titans first-round pick, who was released earlier this week.

Jackson graded as Pro Football Focus’ No. 8 overall corner in 2019. It was a big step up from ’17 and ’18, though he still garnered top-40 finishes in each year. Unfortunately, a knee injury limited him to just three games in 2020. After a bad platform year, Jackson finds himself looking for work in the worst possible climate. Also, the Titans didn’t do him any favors by releasing him just this past Tuesday.

The Giants’ D was awful in 2019, but things improved last year under defensive coordinator Patrick Graham. The G-Men ranked 12th in yards per game (349), ninth in points allowed (22.3), and a much more respectable 16th in passing yards surrendered (237). Teamed with James Bradberry and Logan Ryan, Jackson could nudge the secondary along even further.

After this year, players attached to fifth-year options will be protected from free-of-charge releases. But the Titans will take advantage of that opportunity in its final year. They are set to release former first-round pick Adoree’ Jackson. 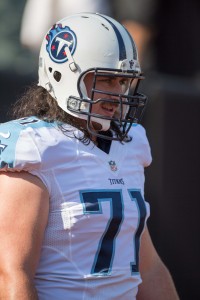 The Titans are cutting both Jackson and starting right tackle Dennis Kelly, Tom Pelissero of NFL.com tweets. Jackson’s option season was set to cost the Titans $10.2MM. They will turn that entire amount into cap space, a luxury that will not be available to teams beginning next year.

This is certainly not a surprise, however. Jackson played in only three games last season; a knee injury cost the 2017 first-round pick most of his season. The Titans shelved Jackson on IR ahead of Week 1, and although they activated him off the injured list in early November, Jackson continued to miss time. He will be entering free agency at a bad time, coming off his worst season and doing so after the salary cap dropped by $16MM. Some interest figures to come Jackson’s way, however. He graded as Pro Football Focus’ No. 8 overall corner in 2019 and landed in the advanced metrics site’s top 40 corners in ’17 and ’18.

Tennessee will unveil a new group of corners next year. The Titans have now cut Jackson and Malcolm Butler. They will also have a new right tackle.

After the Titans passed on Jack Conklin‘s fifth-year option, they drafted Isaiah Wilson in the 2020 first round. After a disastrous rookie year, Wilson is now with the Dolphins. The Titans used Kelly at right tackle throughout last season, elevating him from the swing role he previously held. Kelly’s most recent extension ran through the 2022 season.

Overall, the Titans will create more than $17MM in cap space by making these moves. That will bump the team’s total to nearly $30MM, per OverTheCap. They also will have to replace two key cogs.

The Titans are continuing to take it slow with Adoree’ Jackson. They will take the atypical step of activating Jackson ahead of their Week 10 game but declaring him out.

Jackson is back on Tennessee’s 53-man roster, but the fourth-year cornerback will not play against the Colts on Thursday. Jackson returned to practice Oct. 21, meaning Wednesday marked the 21-day deadline for the Titans to activate the corner in order to have him participate in the 2020 season.

A knee injury cropped up just before the start of the regular season, and the Titans shelved Jackson on IR ahead of Week 1. The team will give the three-year starter at least 10 more days to work his way back. Tennessee faces Baltimore on Sunday, Nov. 22.

The 2017 first-round pick has started 39 games in 43 appearances as a pro. Tennessee picked up Jackson’s fifth-year option in May. The Titans have struggled this season defending aerial attacks; they rank 24th in pass defense DVOA. The team rearranged some pieces recently, cutting Johnathan Joseph and Vic Beasley. A Jackson return would certainly help the unit as the Titans push for their first AFC South title in 12 years.

To make room on their 53-man roster, the Titans placed cornerback Dane Cruikshank on IR.

The Titans have placed Adoree Jackson on injured reserve prior to tonight’s opener against the Broncos, per a club announcement. Jackson was limited in practice on Friday with a knee injury, but the club has not offered additional details on the severity of the injury. At minimum, Jackson will miss the next three weeks, per the league’s modified IR rules for this season.

Jackson was said to be having a strong camp before the injury. Now, the Titans will have to look elsewhere for support opposite of Malcolm Butler. Veteran Johnathan Joseph seems likely to get the nod and second-round rookie Kristian Fulton may also see some additional snaps in the interim.

To round out the group, the Titans have promoted cornerback Tye Smith from the taxi squad. Running back Jeremy McNichols and wide receiver Nick Westbrook-Ikhine will also get called up for Monday night’s game against Denver, though they’ll revert back to the p-squad on Tuesday morning.

Last year, Jackson graded out as the eighth-best cornerback in the NFL, according to the advanced metrics at Pro Football Focus. This offseason, the Titans made the no-brainer move to pick up his fifth-year option for 2021. After this season, the Titans are expected to discuss a long-term deal with the USC product to keep him for years to come.

The Titans will exercise Adoree’ Jackson’s fifth-year option, according to Paul Kuharsky (Twitter link). He’s now under contract for the 2021 season for roughly $10MM. Meanwhile, wide receiver Corey Davis’ option has been turned down.

Last year, Jackson graded out as the eighth-best cornerback in the NFL, according to the advanced metrics at Pro Football Focus. Even with a raise to an eight-figure salary, the 24-year-old (25 in September) profiles as a major bargain. After this, the Titans are expected to discuss a long-term deal with the USC product to keep him out of reach for rival teams in early 2022.

Jackson has offered solid defense as an outside corner, but GM Jon Robinson recently suggested that the Titans may kick him over to nickel this season. Alternatively, they could use some combination of rising sophomore Amani Hooker and second-round rookie Kristian Fulton to handle the slot.

As shown in PFR’s fifth-year option tracker, there are still a number of decisions that need to be made on 2017 first-round picks between now and the Sunday deadline.