The Jets have moved Mekhi Becton to right tackle, with Robert Saleh citing George Fant‘s athleticism as making him a better blindside fit. Although the second-year Jets HC said Becton is appropriately athletic for the left tackle post, the former first-round pick has faced steady scrutiny regarding his weight. Becton was rumored to be over 400 pounds last year, and Rich Cimini of ESPN.com notes the third-year blocker was thought to be in the 390s as recently as minicamp, when he would not confirm his weight. That said, Cimini adds Becton looks slimmer at Jets training camp. Saleh said the Louisville product has “got himself into football shape.” While Becton would not confirm his training camp weight, he said he hit the goal he targeted. Becton’s listed weight is 363 pounds. Given the rumblings about Jets dissatisfaction with their largest player’s frame at points, this will continue to be an issue to monitor as he transitions to a new position.

The Jets signed former Buccaneers safety Jordan Whitehead early in free agency this offseason, hoping to pair him with last year’s free agent addition Lamarcus Joyner. They’ll depend on Whitehead to provide some consistency and a winning-pedigree to a position group that lacked both last season, according to Brian Costello of the New York Post.

Last year saw a revolving door at the safety position for New York. Joyner didn’t get the opportunity to help improve the group after suffering a Week 1 injury that would hold him out for the rest of the year. Marcus Maye, now with the Saints, also saw an early injury end his season after only appearing in six games. This left the Jets to rely on backups and depth players. Ashtyn Davis and Elijah Riley holdover from last year’s roster as the two safeties who started the most games last year, while reserves like Adrian Colbert, Jarrod Wilson, and Will Parks found themselves starting games for the Jets at some point during the season.

Now with a healthy Joyner and the newly-signed Whitehead, New York hopes to have a strong starting duo with last year’s starters, Davis and Riley, serving as experienced backups.

Here are a few other notes from Costello’s roster breakdown:

Bills safety Jordan Poyer ended his hold out last month, attending mandatory minicamp in order to avoid the roughly $90,000 in fines he would have been liable to pay for an unexcused absence. He’s also not likely to return to his hold out once camp begins for a similar reason, according to Vic Carucci of The Buffalo News.

Poyer had skipped OTAs in May after he had decided to push Buffalo for a contract extension. The deal would likely benefit both parties. Poyer would get a raise while the Bills would have an opportunity to lower Poyer’s cap hit and keep one of the NFL’s best safety tandems together for a few more years (as fellow safety, Micah Hyde, is under contract through next season).

If Poyer balked and ended his hold out at $90,000 to attend minicamp, it’s had to imagine that he would be willing to shell out the $50,000 daily fine that would hit him as a player not on a rookie contract missing camp. Poyer has recently doubled down on his assertion that he truly wants to remain in Buffalo, so moving forward in good faith puts the pressure on the Bills to provide him with a deal to keep him from walking at the end of the season..

Here are a few other rumors from out of the AFC East, specifically coming out of the Garden State:

John Franklin-Myers has gotten off to a strong start in his fourth season, and the Jets are rewarding the veteran defensive lineman. The parties have agreed on an extension, D.J. Bien-Aime of the New York Daily News tweets. A 2018 fourth-round pick, Franklin-Myers was set to become a free agent in 2022. 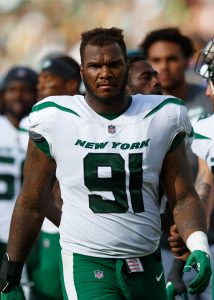 The Jets picked up Franklin-Myers via waivers ahead of the 2019 season. He represents one of Joe Douglas‘ first notable acquisitions as Jets GM. The Rams drafted Franklin-Myers out of Stephen F. Austin and used him as a backup throughout their 2018 NFC championship season. Despite Franklin-Myers sacking Tom Brady once in Super Bowl LIII, the Rams cut him prior to his second season.

Franklin-Myers participated in the Jets’ seven-sack romp against the Titans, dropping Ryan Tannehill for a sack and hitting the besieged Tennessee quarterback three times. He joins a few pieces on Gang Green’s defensive line signed beyond 2021. Quinnen Williams‘ rookie deal runs through 2022, and the Jets’ top D-lineman can be controlled on his rookie deal through 2023 via the fifth-year option. Lawson is signed through 2023, Sheldon Rankins through 2022.

The Jets are getting some reinforcements in the trenches. The team is getting back a member of the offensive and defensive lines, as defensive end John Franklin-Myers and offensive tackle Brent Qvale have both been designated for return from injured reserve.

Both can now begin practicing with the team, and this starts a three-week window for them to be activated. Franklin-Myers was a fourth-round pick of the Rams in 2018, and had a solid rookie season in Los Angeles. He appeared in all 16 games as a situational pass-rusher, and notably had a strip-sack of Tom Brady in the Super Bowl. Because of a numbers game on the Rams’ defensive line he was surprisingly released at final cuts, and was quickly scooped up by the Jets.

It was a nice under the radar acquisition for New York, and he should have the chance to earn some playing time assuming he’s activated. Qvale was undrafted out of Nebraska in 2014, and has been with the Jets ever since. After spending his rookie season on the practice squad he made the team in 2015, and has started multiple games in each of the past three seasons. He was carted off with a knee injury during training camp, and then placed on IR. The Jets have been banged up on the offensive line and starting right tackle Chuma Edoga was recently ruled out with a knee injury, so they could use some added depth.