Sunday could mark the first time this season that Chargers wide receivers Keenan Allen and Mike Williams start and finish a game together. As Lindsey Thiry of ESPN.com reports, both players were full participants in practice on Friday and are expected to play in the Bolts’ Week 11 matchup with the division-rival Chiefs.

Allen sustained a hamstring injury in the season opener, and he has reaggravated the injury multiple times. He returned for Los Angeles’ Week 7 loss to the Seahawks, though he appeared in just 23 snaps and caught two passes for 11 yards. The hamstring problem flared up during the club’s Week 8 bye, and he has missed the last two contests as a result.

Williams, meanwhile, suffered a high ankle sprain during the above-referenced Seattle matchup and was forced to leave the game early. Like Allen, Williams has been sidelined for the last two games.

When healthy, the Allen-Williams tandem is one of the best WR duos in the league, and their compensation reflects that. In March, Williams signed a three-year, $60MM contract featuring $40MM in guaranteed money, and he was living up to that deal prior to the injury. In seven games, the Clemson product has posted 37 catches for 495 yards, putting him on pace for his second consecutive campaign of 1,100+ yards. Though his 2022 13.4 YPR rate represents a step back from his recent output, his catch percentage has increased from 58.9% in 2021 to 62.7% this year.

Allen signed his $20MM/year deal in September 2020, an accord that made him the second-highest-paid wideout in the league at the time. That marked the second extension the Chargers authorized for Allen since they selected him in the third round of the 2013 draft, and he has largely justified the team’s faith in him. From 2017-21, Allen averaged over 101 receptions and 1,180 yards per season, all of which culminated in Pro Bowl nods. He has never been the home run threat that Williams is, but he is about as reliable as a receiver can be.

Although the 2022 season has been a wash for Allen thus far, a return to his typical form would be a significant development for a Chargers club that is 5-4 and currently just outside the AFC playoff picture. Per Thiry, the team is also set to welcome back right tackle Trey Pipkins III, who missed LA’s Week 10 loss to the 49ers due to a knee injury.

One of the Chargers’ key pieces in an effort to bolster their run defense this offseason, Austin Johnson will be sidelined for the rest of the year. Brandon Staley said a knee fracture will keep the veteran defensive lineman out.

Johnson also sustained MCL damage during the Bolts’ Week 9 win in Atlanta, Daniel Popper of The Athletic tweets. The seventh-year veteran is signed through 2023, having agreed to a two-year, $14MM pact early in free agency. 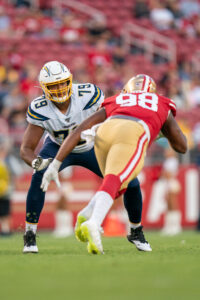 Thirtieth against the run last season, the Chargers reassembled their interior defensive line this year. They added Johnson, ex-Ram Sebastian Joseph-Day and fifth-round pick Otito Ogbonnia to the equation. Los Angeles still rosters Jerry Tillery, but the former first-round pick suffered a back injury weightlifting last week. Tillery missed Sunday’s game against the Falcons. Despite the upgrade efforts, the Bolts rank 29th against the run after eight games. Johnson’s injury certainly will not help matters.

Johnson, 28, elevated his value during a two-year stay with the Giants. The former Titans spot starter worked as a backup in 2020 but started all 17 Giants games last season, leading to a nice free agency payday. Johnson’s Chargers deal included $10.63MM guaranteed. While that does not ensure he will be back with the team in 2023, when an extensive rehab effort will now be required, the seventh-year vet did well to collect some guaranteed cash beyond the first year of his contract.

The Chargers also lost right tackle Trey Pipkins during their Falcons matchup. Pipkins aggravated an MCL sprain, Staley said. Pipkins still has a chance to play in Week 10, per Staley. Illustrating how no two injuries are alike, 49ers running back Elijah Mitchell has lost half the season to an MCL sprain.

A former third-round pick, Pipkins has bounced in and out of L.A.’s lineup. This year, however, he won a training camp competition against Storm Norton to commandeer the right tackle gig. Pipkins has started every Chargers game this season. Norton, last year’s primary right-side starter, replaced him Sunday. The Chargers are already playing shorthanded up front, with Pro Bowl left tackle Rashawn Slater likely out for the season due to a biceps tear.

The Chargers offensive line is almost perfectly set for the regular season. They return the left-side trio of tackle Rashawn Slater, guard Matt Feiler, and center Corey Linsley, who were all very impressive in the same roles last year. They used their first-round pick this year to fill the right guard spot with rookie guard Zion Johnson out of Boston College. 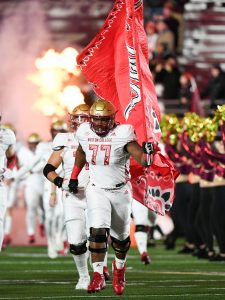 The right tackle position is currently a battle between last year’s starter Storm Norton and reserve lineman Trey Pipkins III. Norton has vastly outperformed his undrafted status, but does leave something to be desired at the position. The Chargers are really hoping, though, that Pipkins will live up to his third-round draft stock from three years ago, according to Daniel Popper of The Athletic.

Pipkins spent the offseason working out with Duke Manyweather, who works with offensive lineman in Dallas. Los Angeles will hope that Pipkins will be able to make the leap and take over the starting right tackle job to fill in their ideal offensive line. If not, they will likely rely again on Norton and focus any blocking help directly to that side of the line.

Here are a few other notes on position battles the Chargers face going into the preseason, according to Popper:

The Chiefs’ Orlando Brown trade appears to have closed the book on an Eric Fisher return, ending that era at eight years. Although Fisher has experience at right tackle, having played there as a rookie, the former No. 1 overall pick figures to head elsewhere.

Given Fisher’s resume and experience level, he profiles as an interesting option for a team in need at left tackle. Teams are monitoring the free agent blocker, with Ian Rapoport of NFL.com indicating the 30-year-old lineman has spoken to “numerous teams” this offseason (Twitter link).

Fisher will be an after-the-draft option for teams, per RapSheet. A torn Achilles led the two-time Pro Bowler to free agency; the Chiefs also cut All-Pro Mitchell Schwartz. Andy Reid said earlier this week the team could circle back to both, but Kansas City’s deal for Brown stands to cut off Fisher’s path back to western Missouri.

While scrutinized for years due to his draft slot, the former mid-major standout has proven reliable for a while. From 2014-18, Fisher did not miss a game due to injury. A core muscle issue limited him to eight regular-season games in 2019, but the Chiefs’ Super Bowl push — a nine-game win streak — began when Fisher returned to the lineup that November. Counting the playoffs, Fisher started 17 games last season. He graded as a top-20 tackle, per Pro Football Focus, in 2020.

Most teams have addressed this high-value position, but a few should be in the market for help. However, this draft features some first- and second-round options that will help some of the teams with deficiencies here fill the spots. The Colts have signed Sam Tevi and Julie’n Davenport this offseason but are still looking for a left tackle. The Steelers have not re-signed Alejandro Villanueva, who is entering his age-35 season. Washington is also searching for a left tackle.

Chargers GM Tom Telesco indicated he is bullish on Trey Pipkins, the Bolts have been busy restocking their O-line this year and appear in need here as well. Pipkins, who has started eight games over his first two seasons, graded outside PFF’s top 70 tackles last season. The 2019 third-round pick will likely have competition, at best, or a surefire replacement, at worst, going into the ’21 slate.

Fisher’s Achilles injury certainly sidetracked his career (and the Chiefs’ repeat championship aspirations), but the veteran should have a path to a starting job come training camp — so long as his recovery proceeds on track.

Despite skyrocketing COVID-19 numbers nationwide, the NFL’s stance remains that postseason games will occur at team venues. Although no final decision has surfaced, NFL chief medical officer Dr. Allen Sills and union president J.C. Tretter providing anti-bubble statements provides a good indication no one- or two-site postseason will commence. This pours cold water on an in-case-of-emergency bubble scenario the league was considering last month. But no real bubble momentum has emerged since the pandemic began.

“There’s not magic about a bubble. In fact, there’s the same challenges within a bubble. Let’s be clear: COVID-19 does not fear a bubble,” Tretter said. “The vulnerability inside a bubble is the same, which is full compliance of protocol at all times. We believe that it’s all about compliance, and compliance with the things that we know avoid risk is important, whether you’re all together in an isolated environment, or whether you’re in your community.

The NBA’s Orlando bubble produced zero positive COVID tests for several weeks, however, and Major League Baseball’s multi-site bubble setup did not produce a positive case until the Justin Turner saga in Game 6 of the World Series. While the NFL has bulked up its coronavirus protocols as the season has progressed, the league going without a postseason bubble stands to bring greater chances star players miss playoff games — especially with the coronavirus environment having changed since the NBA and MLB postseasons.

Here is the latest from the virus front:

The Chargers have officially wrapped up their draft class, as the team announced they’ve signed offensive tackle Trey Pipkins to his rookie contract. Pipkins, the 91st pick in April’s draft, was the last player in Los Angeles’ class to sign.

Pipkins played at D-II school Sioux Falls, so not a ton was known about him entering the draft. The first player in program history to be drafted into the NFL, Pipkins was a D-II All-American last season. The Chargers likely didn’t anticipate Pipkins playing much early on when they drafted him, but he could be forced into action. Left tackle Russell Okung is dealing with a mysterious injury, which could give Pipkins an opportunity sooner than expected.

NFL.com’s Lance Zierlein viewed him as a developmental prospect, and someone who would need a good amount of time to sit and learn. As such, it won’t be good news for the Chargers if he’s thrust into action due to Okung’s injury.

Third round picks are often among the last to sign, because the CBA language concerning them is very vague. As of Thursday, there were only 26 picks left unsigned. You can view the contract status of every draft pick at our tracker here.