The Texans had recently re-signed Freeman after he failed to make the initial 53-man roster. Houston will move forward with rookie Dameon Pierce, Rex Burkhead, and Dare Ogunbowale at running back.

Ward has been with the Eagles on-and-off since signing with the team after going undrafted in 2017. His first two seasons consisted mostly of time on the practice squad. The former University of Houston quarterback then took a hiatus from the NFL to sign with the Alliance of American Football. When the AAF suspended operations, Ward re-joined the Eagles. He had a bit of a breakout year in 2020, catching 53 passes for 419 yards and six touchdowns, but took a bit of a backseat in Philadelphia’s offense last season.

Miller was called up as a response to Browns cornerback Greedy Williams being placed on injured reserve today. Miller will slot in behind Denzel Ward, Greg Newsome II, Martin Emerson, and A.J. Green as the secondary faces off against their former teammate Baker Mayfield in Week 1.

In a sequence of events that no one ever wants to see, the Giants had four players leave their final preseason game this Sunday with injuries. Backup quarterback Tyrod Taylor was carted off the field after a vicious hit to the chest by Jets pass rusher Micheal Clemons. New York also saw three players leave the game with concussions, but only one of them made the final roster: tight end Daniel Bellinger.

Head coach Brian Daboll has insisted that Taylor’s back injury is not serious, according to Darryl Slater of NJ.com. This is great news for Giants fans who may have worries that starting quarterback Daniel Jones will continue his trend of not being able to appear in every regular season game the Giants play. Since being drafted in 2019, Jones has missed at least two games each year, sitting out of six contests over the past year alone.

The Bellinger-concussion is significant as the fourth-round rookie out of San Diego State is currently set to start at tight end for New York with Ricky Seals-Jones on injured reserve to start the year. Going into the season as a rookie starter, Bellinger needs all the practice he can get before the season opener in Nashville.

Here are a couple other injury updates from around the league, starting with some good news from the Hoosier State:

The Bears’ new regime has been busy at receiver this offseason, adding a host of veteran auxiliary options to what promises to be a Darnell Mooney-centered position group. They made another move Wednesday. 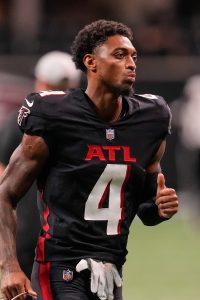 A former Titans fifth-round pick back in 2016, Sharpe spent last season with the Falcons. The 6-foot-2 receiver caught 25 passes for 230 yards with Atlanta, which saw its receiving corps take a major hit from Calvin Ridley‘s midseason exit. Sharpe, 27, has bounced around since his Titans rookie contract expired in 2020. The Vikings and Chiefs brought him in that year, though he did not catch a pass for Minnesota and did not suit up for a game with Kansas City. The Chiefs stashed Sharpe on their practice squad to close out the 2020 season and re-signed him last year, but they cut bait shortly after the draft.

Allen Robinson left the Bears as a free agent, joining the Rams, and Poles has gone with a quantity-driven approach around Mooney this offseason. Pringle, Equanimeous St. Brown and David Moore joined the Bears as free agents. The team also used a third-round pick on Tennessee wideout Velus Jones.

A week after the Chiefs released Tajae Sharpe, the veteran wide receiver found a new home. The Falcons are signing the former Titans draftee, Field Yates of ESPN.com tweets. 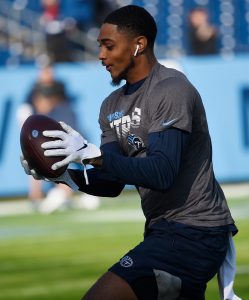 After Sharpe spent 2020 in Minnesota and Kansas City, he will reunite with former Tennessee assistant Arthur Smith. The new Falcons HC was with the Titans throughout Sharpe’s tenure and served as the team’s offensive coordinator in 2019, Smith’s final Tennessee season.

Although Sharpe caught on with the Vikings and Chiefs last year, he does not have a regular-season reception since his Titans tenure ended. The former fifth-round pick caught 92 passes for 1,167 yards and eight touchdowns in three Titans seasons. Smith played out his rookie contract in Tennessee but only saw action in three of those seasons, missing all of 2017 due to injury. He played in four games with the Vikings last year.

Bigger news has obviously encircled the Falcons’ receiving corps, with Julio Jones no longer looking likely to play an 11th season in Atlanta. Trade noise has followed the perennial Pro Bowler for weeks now, and Jones said Monday he expects to be dealt. Should Jones be traded, Sharpe would have an easier path to Atlanta’s 53-man roster.

The Falcons have Calvin Ridley, Russell Gage and Olamide Zaccheaus in place as their top non-Jones receivers. They also drafted Frank Darby in this year’s sixth round.