The Texans are welcoming back a pair of veterans. After getting cut earlier this week, running back Royce Freeman and wide receiver Chris Conley are re-signing with Houston, reports NFL Network’s Tom Pelissero (on Twitter). 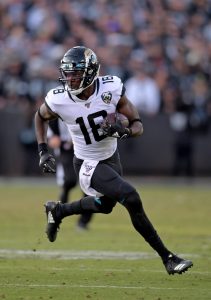 Conley was let go during final roster cuts on Tuesday. The veteran wideout joined the Texans last year, and he finished his first season in Houston with 22 receptions for 323 yards and two touchdowns. After spending the first four seasons of his career with the Chiefs, Conley spent the 2019 and 2020 seasons in Jacksonville. He had a career year with the Jaguars in 2019, hauling in 47 catches for 775 yards and five touchdowns.

With the 29-year-old back in the picture, he’ll likely slide into the sixth spot on the depth chart behind Brandin Cooks, Nico Collins, Chris Moore, Phillip Dorsett, and Tyler Johnson.

Freeman was let go yesterday, but it took him less than 24 hours to land back on the active roster. After spending the first few months of the 2021 season with the Panthers, the veteran RB was claimed on waivers by Houston in November. He got into seven games for the Texans, collecting 154 yards from scrimmage on 42 touches.

The 26-year-old will slot in fourth on the depth chart behind Dameon Pierce, Rex Burkhead, and Dare Ogunbowale. The Texans are also stashing veteran Marlon Mack on the practice squad.