After three-plus seasons with the Raiders, Nathan Peterman has found a new team. The Bears signed the veteran quarterback to a one-year deal Wednesday. 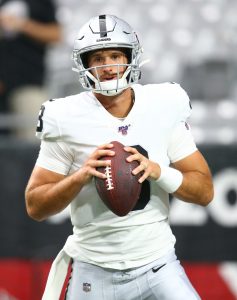 Although the once-maligned quarterback is best known for making disastrous starts during his Bills tenure, which included a Week 1 start ahead of Josh Allen in 2018, Peterman has stabilized his career as a reserve. He caught on with the Raiders during Jon Gruden‘s first year, and after signing a 2019 reserve/futures contract, the Pitt product continued to work as one of Derek Carr‘s understudies.

Peterman primarily played behind both Carr and Marcus Mariota in Las Vegas. The 2017 fifth-round pick signed a one-year, $1MM pact to stay with the Raiders last year, and he finished the year on the Raiders’ practice squad. Since his Bills tenure wrapped midway through the 2018 season, Peterman has attempted eight regular-season passes. He still carries a career 3-12 career touchdown pass-to-interception ratio and a 34.0 passer rating.

The Bears previously carried one of the most experienced sets of second- and third-string quarterbacks in NFL history, rostering Andy Dalton and Nick Foles. Dalton has since signed with the Saints, and the Bears cut Foles shortly after the draft. The 10-year veteran remains a free agent. Trevor Siemian joins Peterman behind Justin Fields now; the team waived second-year QB Ryan Willis on Wednesday.

5:07pm: Indeed, the Raiders and Peterman are not truly planning to separate. Peterman is expected to land on Las Vegas’ practice squad, according to Tom Pelissero of NFL.com (on Twitter). Unless another team poaches him, Peterman will stay on as the Raiders’ de facto third-stringer. 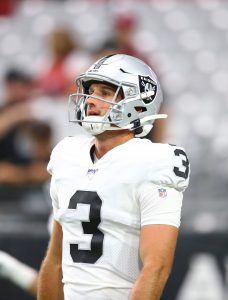 Since this transaction processed after today’s 3pm trade deadline, Peterman will head to the waiver wire. If unclaimed, the fifth-year quarterback will be a free agent. The Raiders signed Peterman to an extension in February; just more than $500K remains on his deal.

Following some disastrous in-game outings with Buffalo, Peterman landed in Oakland in December 2018. The then-Jon Gruden-led franchise then kept Peterman around via a reserve/futures deal and used him as a Derek Carr reserve over the next three seasons. Marcus Mariota stands as Carr’s backup; the Raiders do not have a quarterback on their practice squad.

Given Gruden’s abrupt exit, it will be somewhat interesting if the Raiders bring back Peterman. He remains practice squad-eligible, should Las Vegas go this route. Mariota has spent time on IR in each of his two Raiders seasons and certainly battled health issues while with the Titans.

A fifth-round pick in 2017, Peterman has a ghastly 3-to-12 touchdown pass-to-interception ratio and has completed 52.6% of his passes (at just 4.2 yards per throw). The 27-year-old passer has nevertheless stuck around as a backup arm. He appeared two Raiders games, the second of which coming earlier this season.

While the annual questions exist around Derek Carr‘s status with the Raiders, the franchise now has two of his backups under contract for 2021.

The Raiders announced Thursday they have agreed to terms with Nathan Peterman on a one-year deal. The deal could pay Peterman up to $2.775MM, Tom Pelissero of NFL.com notes.

Peterman being back on Las Vegas’ 53-man roster in 2021 would mark a fourth season in silver and black for the former Bills draftee. The Raiders initially added Peterman to their practice squad late in the 2018 season. Being a 2017 draftee, Peterman was eligible for unrestricted free agency in March.

Despite Peterman’s Bills performances prompting constant criticism, he has found a home with the Raiders. The team reworked his rookie deal last summer and now will have him entering the 2021 offseason on the roster behind Carr and Marcus Mariota. The latter is signed through the ’21 season.

A former fifth-round pick, Peterman has played in one game as a Raider. He completed 3 of 5 passes in the Raiders’ blowout loss to the Falcons in November. Overall, Peterman’s numbers are ghastly. He has thrown three touchdown passes and 12 interceptions — five of those picks coming in a disastrous start against the Chargers as a rookie — and has averaged just 4.2 yards per attempt. But while the Raiders have employed Mike Glennon and DeShone Kizer since acquiring Peterman, Jon Gruden kept Peterman around over those former starters. This relationship is now set for a fourth season.

Nathan Peterman‘s job appears to be safe. On Friday, the Raiders reworked the quarterback’s contract to go from a non-guaranteed $2.133MM to a guaranteed one-year, $1MM pact (Twitter link via Field Yates of ESPN.com).

Quarterback depth is more important than ever amidst the pandemic and the Raiders see Peterman as a worthwhile QB3 to stash behind Derek Carr and Marcus Mariota. Of course, Peterman’s on-field track record has left much to be desired. The Bills cut him midway through his second pro year, following a historically bad start to his career. Pro Football Reference’s “indexed” statistics, which account and adjust for different eras of the game, rated Peterman dead last among all QBs since 1970 in passer rating, yards per attempt, interception percentage, and numerous other passing statistics.

Peterman looked sharp in the 2019 preseason, but he landed on IR before the start of the Raiders’ season. This year, he’s healthy, and he’ll be on call for Jon Gruden if needed.