The Jaguars number-two QB went down with an injury yesterday. C.J. Beathard was carted off the field during OTAs, per NFL Network’s Tom Pelissero (on Twitter). According to the reporter, Beathard suffered a groin injury, and an impending MRI will reveal the extent of the injury.

The former third-round pick spent the first four years of his career with the 49ers. Beathard went 2-10 as a starter, completing 58.6 percent of his passes for 3,469 yards, 18 touchdowns, and 13 interceptions. He signed a two-year, $5MM deal with the Jaguars last offseason, and he got into two games as Trevor Lawrence‘s backup, completing his pair of pass attempts.

If Beathard is forced to miss an extended amount of time, the Jaguars will likely turn to Jake Luton or rookie EJ Perry as Lawrence’s primary backup.

More injury news from around the NFL…

C.J. Beathard‘s new Jaguars deal includes $2.75MM in guaranteed money, as NFL.com’s Ian Rapoport tweets. As Rapoport notes, it’s a strong indicator that the quarterback will make the Jaguars’ final 53-man cut. By the same token, it’s a sign that one-time rising star Gardner Minshew won’t be on the roster. 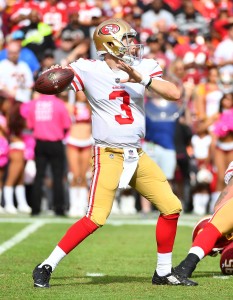 Of course, the Jaguars are expected to draft Trevor Lawrence with the No. 1 overall pick. Up until the Beathard signing, there was at least a chance of Minshew staying on board as the bridge/QB2 for the Clemson star. That spot now seems reserved for Beathard, so the Jaguars will probably start taking those Minshew trade inquiries seriously. Just last week, head coach Urban Meyer said that he wasn’t looking to move the Washington State product.

“At this point, no,” Meyer said. “At this point, I know Gardner a little bit. He came in yesterday. We had a good visit. That’s the second time I’ve spent time with him. This is all kind of new to me. I’m used to spending about five, six hours a day with our quarterbacks — that’s January, February, to get your quarterback ready to go, and you can’t do that in the NFL.”

Despite 2020’s struggles, Minshew is just one year removed from setting franchise records in yards (3,271) and touchdowns (21) for rookie QBs. He’s still on that rookie deal, so any team acquiring him would have him at bargain-basement salaries of $850K and $965K.

The Jaguars won’t get Trevor Lawrence until next month, but they’re adding to the quarterback room in the meantime. Jacksonville is expected to sign C.J. Beathard, a source told Ian Rapoport of NFL Network (Twitter link).

Beathard was originally drafted by the 49ers in the third-round back in 2017, and has spent the past four years in San Francisco. He started five games as a rookie, another five in 2018, none in 2019, and another two this past year due to various benchings and injuries. The Iowa product is 291/497 for 3,469 yards (7.0 YPA), 18 touchdowns and 13 interceptions in his career.

Not terrible numbers for a backup, although some would argue they’re the product more of a Kyle Shanahan system than anything else. We’ve heard that current Jags passer Gardner Minshew is drawing trade interest, so this move could be a precursor to a deal there. Funnily enough the 49ers have been linked to Minshew, so they could end up just swapping places.

New Jaguars coach Urban Meyer did say recently the team wasn’t shopping Minshew “at this point.” The 49ers had discussions about Beathard over the years, and apparently could’ve gotten a sixth-rounder for him around the 2019 deadline. Besides Minshew the Jaguars also have 2020 sixth-round pick Jake Luton, who started three games last year, on the roster.

Raheem Mostert and Deebo Samuel will see their injury-marred seasons end early. The 49ers are shutting down both players with two games to go, Kyle Shanahan said (via the San Jose Mercury News’ Cam Inman).

Both ran into multiple injuries this year, causing the second-year starters to miss significant time in what became a widespread injury-plagued 49ers season. Each player is under contract beyond this season, with Samuel’s rookie deal running through 2022 and Mostert’s pact expiring after next season.

The 49ers, however, are not opting to shut down all their injured skill-position talents. George Kittle has returned to practice, and Inman notes the All-Pro tight end is on pace to return against the Cardinals. Kittle, who has not played since suffering a foot fracture Nov. 1, would catch passes from his former college quarterback if he does return. The 49ers will start Iowa alum C.J. Beathard over Nick Mullens on Saturday.

A 2017 third-round pick, Beathard has worked as San Francisco’s third-string quarterback for much of his NFL tenure. His contract expires at season’s end. Mullens suffered what is believed to be ligament damage in his elbow against the Cowboys, Inman notes, and will likely need Tommy John surgery. He is due to be a restricted free agent in March.

Kittle will only play if he’s 100%, per Shanahan, who noted the 49ers will not shut down their star tight end if he is fully healthy — despite having been eliminated from playoff contention last week.

Mostert left Sunday’s game because of ankle trouble. The special-teamer-turned-RB1 sustained an MCL sprain in September and injured his ankle upon returning in October. Mostert, 28, was not able to surmount the latter malady. Mostert did end a second straight season averaging at least 5.0 yards per carry, however, though he only managed 104 totes this season. Samuel sustained a foot fracture before training camp but was able to return fairly early in the season. However, a hamstring injury hampered Samuel shortly after he returned. The 2019 second-round pick caught 33 passes for 391 yards over seven games this season.

Jimmy Garoppolo will resume practicing this week, but Shanahan said (via Inman) he would be surprised if doctors deem San Francisco’s QB1 100%. It is likely Beathard will handle the 49ers’ final two starts at quarterback. A high ankle sprain sidelined Garoppolo at multiple junctures this season. He played in just six games. Shanahan said last month the plan is for Garoppolo to return as the team’s starter in 2021, though the franchise will surely explore other options this offseason. Two years remain on Garoppolo’s contract, one the 49ers can move without incurring much dead money.

We heard earlier today that the 49ers were getting trade calls on backup quarterback C.J. Beathard, and now we have more details. San Francisco is receiving offers in the “sixth-round range” for Beathard, a source told Matt Maiocco of NBC Sports (Twitter link).

Even though the 49ers have been keeping Beathard inactive on game-days, Maiocco writes that the team “is not inclined to do that deal.” San Francisco’s management and coaching staff have always been infatuated with Beathard, so that’s not shocking even though most teams would probably jump at the opportunity to receive any compensation for their third-string quarterback. Beathard lost the training camp competition with Nick Mullens to carry Jimmy Garoppolo‘s clipboard this season.

Beathard is still only 25 and has another year left on his cheap rookie deal after this season, so it makes sense why some teams would be interested. The Iowa product, who the 49ers took in the third-round back in 2017, has started five games each of the past two seasons. He’s shown some flashes, but his overall numbers are mediocre at best. The trade deadline is on Tuesday, so the 49ers only have a couple of days to decide what to do. They’re still undefeated entering Week 9, so maybe they’ll just choose not to disrupt anything and hang on to him.

Jason Witten made his return to the Cowboys after one year away from the club. As a former locker room leader of the franchise, integrating himself back into the fold could have been tricky, as new leaders have emerged in his absence. However, according to coach Jason Garrett, Witten has had no issues rejoining the team.

“Witt has been very mindful of that coming back,” Garrett said of Witten’s locker room role (via ESPN’s Ed Werder on Twitter). “He doesn’t want to be a guy the younger guys are constantly deferring to. He wants to integrate himself back into it, and he’s done that beautifully.”