Longtime NFL wide receiver Danny Amendola has decided to hang up his cleats after 14 years in the league, according to ESPN’s Adam Schefter. The former undrafted free agent out of Texas Tech certainly made an impact beyond his draft position with a lasting career of NFL football.

Coming out of Lubbock at 5’10”, the diminutive Amendola immediately drew comparisons to another small, undrafted Red Raider wide receiver in Wes Welker, who had just finished tied for third in Offensive Player of the Year voting after an undefeated regular season with the Patriots. While Amendola certainly wanted to make his own name in the NFL, it didn’t hurt that his essential-twin was dominating four years after going undrafted.

Amendola had just had an impressive senior season for the Red Raiders, catching 109 passes for 1,245 yards and six touchdowns, but still ended up as an undrafted free agent signing with the Cowboys. He spent the entire season on the practice squad and then signed with the Eagles just to get assigned to their practice squad.

Amendola was finally granted an opportunity to play after the Rams signed him off the Eagle’s practice squad in 2009. Amendola played 14 games in that first season for St. Louis, ending the year as the team’s third receiver, but he really made his impact in the return game. In his first actual season of play, Amendola led the league in kick return yardage with 1,618 yards. He followed it up by leading the NFL in all-purpose yards in 2010 with 2,364 yards. That year saw his best receiving season with Amendola catching 85 balls for 689 yards and three touchdowns, adding 81 rushing yards, 452 punt return yards, and 1,142 kick off return yards.

The following year saw Amendola begin a long struggle with injuries. Including 15 games missed in 2011 due to a season-ending triceps surgery, Amendola would miss 24 games in the next three seasons and only play in all 16 games once for the rest of his career.

Still, Amendola was relied on throughout his career as a quick slot receiver and return man. When Welker departed New England for Denver in 2013, the Patriots went back to the undrafted Texas Tech well hours later to sign Amendola. Amendola would never quite match Welker’s production, but still gave five strong seasons that saw him pass 600 receiving yards three times and catch 12 touchdowns in the red, white, and blue. He would also lead the league in yards per punt return for the Patriots in 2015.

Amendola would bounce the next four years through Miami, Detroit, and Houston. He continued with the same type of receiving production but gave up kick returning duties and lost a lot of his effectiveness as a punt returner. Amendola’s season in Houston last year ended after he suffered a torn meniscus. It seems after 14 years in the league, that was finally the straw that broke the camel’s back and nudged the career-tough guy towards retirement.

Schefter reported that several teams came calling during the offseason, but Amendola knew it was time to let it all go. He’s ready to “pursue various other interests” that may include a future in broadcasting. About his career, Amendola was quoted saying, “It was better than I could have ever imagined.”

Phillip Dorsett will have a chance to play for three teams this season. After working out for the Texans on Friday, the former first-round pick signed with the team. 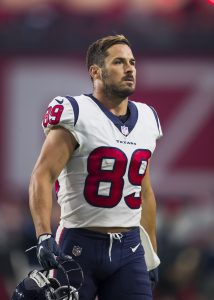 This is a practice squad agreement, though those now frequently lead to active-roster promotions. Dorsett has seen action for the Jaguars and Seahawks this season. The 2015 Round 1 pick, however, has been unable to carve out much of a role in an offense since his 2019 Patriots season.

Dorsett, 28, has played in just three games over the past two seasons and has one reception in that span. The Jags and Seahawks cut him earlier this year.

The Texans also placed Danny Amendola on IR. Amendola underwent arthroscopic knee surgery earlier this week. While that procedure is not an automatic season-ender, the Texans will opt to save a roster spot by shelving a player who would not have been healthy until near season’s end. Houston placed Amendola on IR earlier this year, so his second such transaction will end his season.

With this ending Amendola’s age-36 campaign, it is safe to wonder if the 13th-year veteran will play again. Amendola, who signed a one-year deal worth $2.5MM just before Week 1, is the oldest active NFL wideout by over a year. Amendola’s Texans stint has not produced much in the way of consequence, but the former Patriots standout did move past 6,000 receiving yards for his career.

Danny Amendola will miss another extended stretch. After a hamstring injury sidelined the veteran wide receiver earlier this year, knee trouble has intervened.

The 13th-year veteran suffered a torn meniscus and underwent arthroscopic knee surgery this week, Aaron Wilson of Sports Talk 790 notes. While this surgery is not certain to end Amendola’s season, the timing of it might end up doing so. With Amendola closing out his age-36 season, the prospect of him suiting up for a another NFL game is now in doubt.

Given a one-year deal worth $2.5MM, Amendola played in Houston’s first two games this season but missed the next four due to the hamstring strain. The well-traveled wideout returned in Week 7, playing a complementary role, and caught three passes in the Texans’ Week 12 loss to the Jets.

Since Amendola went on IR earlier this year, the Texans placing him back on their injured list would end his season. Amendola is the NFL’s oldest active wide receiver by more than a year. Only other NFL wideout (DeSean Jackson) has turned 35.

The former Rams, Patriots, Dolphins and Lions pass catcher moved past 6,000 yards for his career this season, having caught 17 passes for 135 yards and a touchdown with the Texans.

Danny Amendola will join Tyrod Taylor in the Texans’ hamstring rehab ward. The veteran wide receiver is expected to miss multiple games due to a strained hamstring, Aaron Wilson of Sports Talk 790 tweets.

Although the Texans signed Amendola days before their Week 1 game, he has been a regular on offense during the team’s first two contests. Anthony Miller will be active for the first time this season, per Wilson, as Amendola’s slot replacement.

Beginning his 12th season, Amendola has six catches for 43 yards in his short Texans tenure. The Houston-area native opened the year with a five-catch Week 1 outing, adding a touchdown in the Texans’ win over the Jaguars. Amendola, who will turn 36 in November, is the NFL’s oldest active wide receiver.

Despite the Texans being pegged as a rebuilding team, their receiving corps carries extensive experience. Five of Houston’s top six wideouts have at least three years’ experience, with Miller (in Year 4) the youngest member of this group. Houston traded for Miller late in the offseason but has not used the ex-Bears slot player in a game yet.

Miller’s bump notwithstanding, the Texans will need to make a roster move, in all likelihood, at receiver. The team placed rookie third-rounder Nico Collins on IR earlier today. Miller, Brandin Cooks, Chris Conley and return man Andre Roberts reside as the available Houston wideouts going into the team’s Thursday tilt against the Panthers.