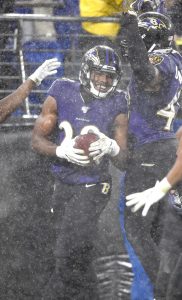 Jordan Richards is sticking with Baltimore. ESPN’s Field Yates reports (via Twitter) that the Ravens have signed the veteran to a one-year, $1.015MM deal. The contract includes $125K in guaranteed money. As Yates notes, the contract “qualifies for the veteran salary benefit,” meaning Richards will have a cap charge of only $875K.

Richards was a second-round pick by the Patriots back in 2015, and he spent most of his three years in New England as a rotational defensive back. His final game for the Patriots came in Super Bowl LII, when he collected six tackles in a loss to the Eagles. He was traded to Atlanta the following offseason, and he put up career-highs during his one year with the Falcons, including 39 tackles and three passes defended. Richards inked a one-year deal with the Raiders prior to the 2019 season, but he was cut by the team at the end of training camp. He ended up landing back on New England, but he was cut after a month with his old/new team.

Richards caught on with Baltimore for the stretch run of that 2019 campaign, appearing in nine games (including a Week 17 win over the Steelers where he returned a fumble for a touchdown). Despite getting cut at the end of the 2020 preseason, the 28-year-old still managed to appear in 16 games for the Ravens this season. All but 15 of his snaps came on special teams, and he finished the year with four tackles.

The Ravens have been busy this week retaining their veterans. We learned yesterday that the organization signed tight end Nick Boyle to an extension.