Veteran linebacker Nate Gerry is headed back to the NFC East. The Commanders are signing him, per Mike Kaye of Pro Football Network (Twitter link). 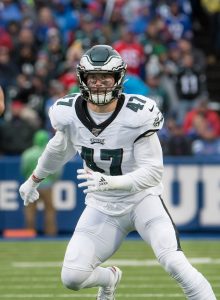 Gerry, 27, began his career with the Eagles in 2017. He played almost exclusively on special teams as a rookie during the team’s Super Bowl run that year, but took on a larger defensive role with each passing year. In 2019, he played a full season for the first tine, starting 12 contests and setting career highs in tackles (78) and sacks (2.5) along the way. He was a full-time starter the following season, but that campaign was cut short due to an ankle injury.

In free agency. the former fifth-rounder signed with the 49ers. By July, however, he was cut, and remained sidelined throughout the entire 2021 season. Kaye adds that he had not fully recovered from the injury until this offseason (Twitter link). Now, he will look to add starting-caliber depth to Washington’s LB corps.

The Commanders are led at the position by the likes of veterans Cole Holcomb and David Mayo, and 2021 first-rounder Jamin Davis. Gerry – who, as noted (on Twitter) by ESPN’s Field Yates, was among several players the team worked out yesterday – could prove to be a valuable find if he is able to regain his form of years past. He will, at a minimum, provide more experienced depth in the middle of the team’s defense than the likes of UDFA Tre Walker, who reversed his retirement decision yesterday.

Washington entered the day with more than $13MM in cap space, so this deal won’t prevent any other additions. Per Kaye’s colleague Aaron Wilson, the team is cutting offensive lineman Tyrese Robinson to make room for Gerry’s arrival (Twitter link).

Nate Gerry‘s stint with the 49ers has ended after only a few months. The team cut the linebacker today, according to SiriusXM’s Adam Caplan (via Twitter).

The 49ers added Gerry back in March on a one-year, $990K deal that included an additional $137+K in incentives. The contract contained no guaranteed money, so San Francisco is off the hook financially.

The 2017 fifth-round pick out of Nebraska had spent his entire career with the Eagles, appearing in 46 regular-season games and six postseason games (including three during Philly’s 2017 run to a Super Bowl championship). After serving as mostly a backup during his first two years in the pros, Gerry started 12 of his 16 contests in 2019, finishing with 78 tackles, 2.5 sacks, two interceptions (including a pick-six), and five QB hits.

The 26-year-old started each of his seven games in 2020, collecting 57 tackles, one sack, and four tackles for loss. He was placed on injured reserve in late October with an ankle injury, ending his season.

Gerry struggled at linebacker in 2020, and the 49ers already had plenty of depth at the position. The veteran’s best chance to make another roster will be via special teams, especially after he logged 834 special teams snaps for the Eagles over his four years with the team.

Nathan Gerry is heading west. The veteran linebacker is signing with the 49ers, Matt Barrows of The Athletic notes (subscription required). John Clark of NBC Sports Philadelphia was first with the news (via Twitter).

The 2017 fifth-round pick out of Nebraska had spent his entire career with the Eagles, appearing in 46 regular-season games and six postseason games (including three during Philly’s 2017 run to a Super Bowl championship). After serving as mostly a backup during his first two years in the pros, Gerry started 12 of his 16 contests in 2019, finishing with 78 tackles, 2.5 sacks, two interceptions (including a pick-six), and five QB hits.

The 26-year-old started each of his seven games in 2020, collecting 57 tackles, one sack, and four tackles for loss. He was placed on injured reserve in late October with an ankle injury, ending his season.

The 49ers seem set at linebacker with Fred Warner, Dre Greenlaw and Azeez Al-Shaair, so Gerry will likely have to settle into a backup role on defense. He’ll probably play a bigger role on special teams; he logged 834 special teams snaps for the Eagles over his four years with the team.

The Eagles‘ current plan does not involve a running back-by-committee approach. Instead, Jay Ajayi is the clear No. 1 ball-carrier coming out of Philadelphia’s offseason activities. Corey Clement, Darren Sproles and a to-be-determined cog will fill out the backfield behind the former Dolphins starter.

“Came in last year and obviously proved to us that he can handle it,” Doug Pederson said, via Zach Berman of Philly.com. “He’s definitely going into camp as the No. 1 guy. It takes nothing away from what Corey did or what Sproles has done here, Wendell [Smallwood], [Donnel Pumphrey] is coming back, Matt Jones. You’ve got guys that are going to compete in that role.”

Ajayi played well post-trade last season, averaging 5.8 yards per carry after gaining just 3.4 per tote in seven games with the Dolphins in 2017. No Eagle back averaged more than 11 carries per game last season, but Berman expects Ajayi to exceed that mark this year. Berman, though, does not anticipate the Eagles will re-sign Ajayi after this season due to the money he could well command after his contract year. This scenario would leave the Eagles in need come 2019, unless they view Clement as a potential every-down back.

Here’s the latest from the defending Super Bowl champions:

The Cowboys have a fair amount of cap space, but they are reportedly uninterested in adding Darrelle Revis to their defensive backfield. That doesn’t mean, however, that certain Dallas players don’t want to see Revis in silver-and-blue in the fall. Star wideout Dez Bryant tweeted Revis yesterday afternoon, saying, “Dallas?…I promise you are going to love what we got going on around here..your attitude fits our culture…waiting…..” While the Cowboys are doubtlessly pleased to see that Bryant is happy in Dallas, Charean Williams of Pro Football Talk confirms the earlier report that the team is unlikely to sign Revis. The Cowboys signed Nolan Carroll and drafted three corners this offseason, and they have chosen to build through the draft in recent years rather than sign expensive free agents.

Malcolm Butler reported to the Patriots earlier this week to participate in voluntary workouts, but as Ryan Hannble of WEEI.com writes, that does not mean he is happy to be back in New England. Butler has been displeased since the club signed Stephon Gilmore to a five-year, $65MM deal this offseason, and while the Saints were apparently willing to pony up big bucks for Butler, they were unwilling to also part with their No. 11 overall draft pick for his services. But with Gilmore set to assume the No. 1 cornerback role in New England, Butler may be shifted to the slot, which could decrease his value when he hits unrestricted free agency next year. Hannable says that the situation is worth monitoring because if Butler isn’t playing the way he wants, and if that creates a locker room distraction, the Pats could still trade him, just as they traded Jamie Collins last year.