Alshon Jeffery‘s season is over. On Thursday, the Eagles announced that the wide receiver has been placed on injured reserve.

Jeffery was forced out of Monday night’s game with a foot injury and after the swelling went down, team doctors learned that he’ll need more than just a week or two of rest, ice, compression, and elevation. It’s a bad break for the Eagles, who are fighting for the NFC East title and a chance to add another Super Bowl ring to their collection.

Jeffery’s season ends with 43 catches for 430 yards and four touchdowns for the 2019 season. It’s a step down from his 65 catches for 843 yards and six touchdowns in 2018 and the 11.4 yards per catch average marks a career low. The Eagles will hope to have him back at full strength in 2020, when he’ll continue to play on his four-year, $72MM deal, which includes a substantial guarantee of $54.595MM.

To take Jeffery’s place on the roster, the Eagles promoted fellow wide receiver Robert Davis from the practice squad. And, to fill Davis’ spot on the taxi squad, the Eagles signed receiver Deontay Burnett.

The Eagles might need Davis for more than just emergency situations. DeSean Jackson is on IR and receiver Nelson Agholor was held out of Monday night’s game with a knee injury. Meanwhile, receiver J.J. Arcega-Whiteside is battling through an injury he suffered against the Giants, though he’s expected to play against the Redskins.

Redskins WR Robert Davis Has Broken Leg, Out For Season

It’s now official. Redskins wide receiver Robert Davis will miss the entire 2018 season, according to Ian Rapoport of NFL Network (Twitter link). It was reported earlier that the team was concerned Davis may have torn his ACL during their preseason opener. As it turns out, Davis broke his leg and tore his LCL, per Rapoport. Head coach Jay Gruden said that Davis will require major surgery and will be sidelined for nine to 12 months (Twitter link via John Keim of ESPN.com). 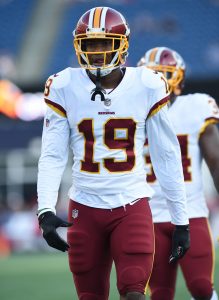 Mike Garafolo of NFL Network tweeted that the “slight silver lining here is no ACL, as they’d feared, and no nerve damage,” adding it “could’ve been worse for him.” Davis, a 2017 sixth-round pick, had reportedly been turning heads at training camp and was pushing for a spot on the team’s 53-man roster.

Davis was extremely productive in college, having played a major role during his four years at Georgia State. In his senior season, he caught 67 passes for 968 yards and five touchdowns. He finished his collegiate career with 222 catches, 3,391 yards, and 17 touchdowns. Given how impressive he was looking before going down, Davis could be back next year to compete for a job with the Redskins.

The injury is a blow to the Redskins’ depth, but it shouldn’t be too devastating. The team will move forward with Jamison Crowder, Paul Richardson, and Josh Doctson as its top three receivers. It was, though, the second brutal injury from the preseason opener, as Derrius Guice was revealed to have torn his ACL.

On the plus side, Gruden had high praise for 2016 UDFA Maurice Harris, who has seen limited action in his first two years in the league but who could be in for an increased role in 2018. Gruden said, “Mo is a great all-around receiver for us. We’re confident he can line up anywhere” (Twitter link via Keim).