Shaquem Griffin defied considerable odds by becoming a Central Florida standout and NFL regular, forging a football path despite losing his left hand at the age of 4. The 2018 fifth-round pick played three seasons with the Seahawks and spent time on the Dolphins’ practice squad. 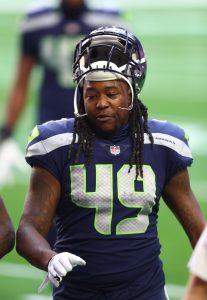 The inspirational linebacker, however, announced Wednesday (via The Players’ Tribune) he will retire rather than pursue a fifth NFL season. The twin brother of Jaguars cornerback Shaquill Griffin, Shaquem said he aimed to catch on with the Jags last year — one featuring a few opportunities elsewhere — but after that did not materialize, he began moving toward leaving the game.

“All this traveling around, working out for teams, trying to catch on somewhere, trying to hang on — it wasn’t what I wanted. Football had already given me so much, and the only thing I still really wanted from the game was to play with my brother again,” Griffin said. “So I told my agent, Buddy Baker, thank you for grinding and bringing me these opportunities. But unless it’s Jacksonville, I’m good.”

Griffin spent the early part of last season on Miami’s taxi squad and worked out for the Cardinals, Titans and Jets. The Bills, Cowboys and Falcons also expressed interest, Griffin said, and he participated in the Broncos’ 2021 minicamp. But after the Dolphins released him from their practice squad in October, the St. Petersburg, Fla., native passed on offers that did not come from the Jags. Jacksonville signed Shaquill Griffin in March 2021, separating the twin brothers after they had played three seasons in Seattle.

For his career, Shaquem Griffin played mostly on special teams. He made 25 tackles with the Seahawks, who drafted him ahead of Shaquill’s second season. Shaquem notched 18.5 sacks over his final two college seasons and helped Central Florida finish the 2017 campaign at 13-0. He tallied one NFL sack, doing so after working his way back onto Seattle’s active roster following a September cut. Shaquem, who played with his brother for four seasons at Central Florida and three with the Seahawks, added a sack on Aaron Rodgers in Seattle’s 2019 divisional-round game.

The Dolphins will host linebacker Shaquem Griffin on a visit today (Twitter link via NFL.com’s Tom Pelissero). Griffin, 26, has spent the last three years with the Seahawks but remains available on the verge of training camp. 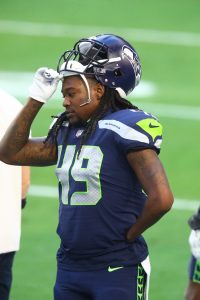 Griffin recently spent some time in Denver but left without a deal. For what it’s worth, Broncos coaches were reportedly impressed with his on-field work. The door may still be open there, but the Dolphins could snag him first.

Griffin has mostly played as a special teamer, or an on-ball linebacker when on defense. This year, he’s hoping to transition into a full-time pass-rusher. He’s suited up for a total of 46 games for the Seahawks across three seasons with one start. All in all, he’s notched 25 total tackles, one sack, and one pass defensed.

Both Griffin brothers played their entire pro careers with the Seahawks, up until now with the Seahawks. Earlier this year, twin brother Shaquill landed a big deal from Jacksonville to bolster their cornerback group.

Shaquem Griffin will audition for the Broncos’ during their minicamp this week (Twitter link via Mike Klis of 9News). Griffin has reportedly drawn interest from multiple teams this offseason, but this marks his first known tryout.

Griffin, the twin brother of cornerback Shaquill Griffin, has been one of the NFL’s most inspiring stories. Despite losing his left hand at the age of 4, he earned first-team all-American Athletic Conference at Central Florida. Then, he heard his name called in 2018 when the Seahawks drafted him in the fifth round.

Griffin has spent most of his career as a special teamer with some time as a true linebacker. Now, he’s hoping to transition to a full-time edge rusher. He’s suited up for a total of 46 games for the Seahawks across three seasons with one start — against the Broncos in the 2018 season opener. All in all, he’s notched 25 total tackles, one sack, and one pass defensed.

Multiple teams have expressed interest in signing free agent Shaquem Griffin (Twitter link via NFL.com’s Tom Pelissero). Although he’s spent much of his career as a true linebacker, Pelissero hears that he could transition to a full-time edge rusher.

Griffin has suited up for 46 games over three seasons with the Seahawks. Serving mostly as a special teamer, he’s compiled 25 total tackles, one sack, and one pass defensed over the course of his career. The twin brother of cornerback Shaquill Griffin, Shaquem has managed a solid career of his own, despite playing with one hand.

In his final year at Central Florida, Griffin finished as a first-team all-American Athletic Conference selection with 74 tackles (13.5 for loss), a team-high seven sacks, one interception, three pass breakups, and two forced fumbles.