The Colts have released defensive tackle Antwaun Woods, per a club announcement. It’s possible that Woods could return to the roster this week after some shuffling, however. The move was effectively made to clear space for recently-promoted quarterback Brett Hundley. 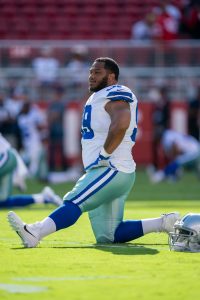 Woods, 28, joined the Colts in May, just after he was released by the Cowboys. The Colts stashed him on the taxi squad to start the year, but promoted him in Week 3. To date, that’s been his only appearance for Indy.

A 32-game Cowboys starter from 2018-20, Woods was brought on for depth behind DeForest Buckner and Grover Stewart. Instead, they’ll move forward with two former UDFAs — Taylor Stallworth and Chris Williams — stationed behind their starters.

Known more for his run-stopping abilities than interior pass-rushing work, Woods played 57% of the Cowboys’ snaps in 2018 and worked as a full-time starter. The former UDFA started 10 games in 2019 but saw his role reduced during a woeful Dallas defensive season in 2020. 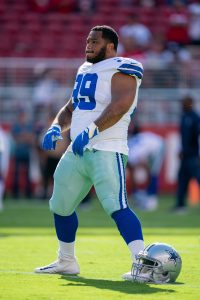 Shortly after the Cowboys made Antwaun Woods a post-draft cut, he booked a Colts visit. That meeting will lead to a deal. The Colts and Woods agreed to terms on a one-year contract Tuesday, Adam Schefter of ESPN.com tweets.

Woods met with the Colts on Monday and will now be in line to provide depth for Indianapolis’ DeForest Buckner-led D-tackle crew. Woods has been a starter for multiple seasons, working as such 32 times for the Cowboys from 2018-20.

While Woods’ time in Dallas did not overlap with Colts DC Matt Eberflus‘, with the former Titans UDFA landing in Texas in 2018, the 318-pound defender will be tasked with helping Eberflus’ Indianapolis unit. Buckner and Grover Stewart serve as the Colts’ first-string defensive tackles, but versatile performer Denico Autry left in free agency. Woods, 28, has more experience than Indianapolis’ other inside rotational options.

The Colts did draft a player who profiles as an inside defender this year, or a cog that could see time at both end and tackle, in second-rounder Dayo Odeyingbo. But the 6-foot-6 Vanderbilt product suffered an Achilles tear in January and may not play until 2022. In the meantime, Woods will aim to help. He did finish outside Pro Football Focus’ top 80 interior defenders last season, but the Colts likely hold a different view of his capabilities.

The Colts are set to meet with defensive tackle Antwaun Woods (Twitter link via ESPN.com’s Adam Schefter). This marks Woods’ first known visit since he was released by the Cowboys last week.

The Cowboys retained Woods as a restricted free agent, but opted to cut him after adding younger (and cheaper) defensive linemen in the draft. Now, fourth-rounder Osa Odighizuwa and sixth-rounder Quinton Bohanna have a clearer path to the field in Dallas. Meanwhile, in Indy, Woods could backstop starters DeForest Buckner and Grover Stewart. But, odds are, there’d be only one spot available between him and reserve Taylor Stallworth.

Woods has started most of his games for Dallas over the past three years, tallying 80 tackles, four tackles for loss, 2.5 sacks, and a pair of fumble recoveries.

The Cowboys are waiving starting defensive tackle Antwaun Woods (Twitter link via ESPN.com’s Adam Schefter). Woods was retained as a restricted free agent, but the Cowboys will shed his salary instead after drafting multiple defensive linemen. In addition, the Cowboys have also cut cornerback Saivion Smith, according to Calvin Watkins of the Dallas Morning News (on Twitter). 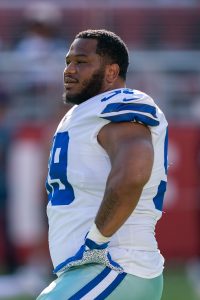 Woods has started 32 of his 39 games for Dallas over the past three years, compiling 80 tackles, four tackles for loss, 2.5 sacks, and a pair of fumble recoveries. By cutting the former UDFA, the Cowboys will save $2.133MM on the books for 2021.

The veteran was a favorite of Rod Marinelli, but defensive coordinator Dan Quinn wants to move the D-Line in a new direction. Now, the interior will be bolstered by UCLA fourth-rounder Osa Odighizuwa and Kentucky sixth-rounder Quinton Bohanna.

Smith, meanwhile, spent the bulk of last year on the practice squad. He’s been pushed out by the arrival of rookies Kelvin Joseph and Nahshon Wright.