The Seahawks will try another basketball-to-football conversion effort. They are signing former Baylor hoops starter Mark Vital to their practice squad, Ian Rapoport of NFL.com tweets. 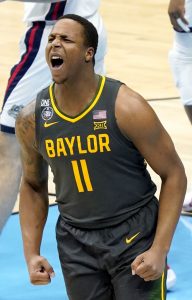 Vital stands 6-foot-5, 250 pounds and follows a few ex-basketball players to the Seahawks. The Seahawks have some experience with this, having converted George Fant from the hardwood to the gridiron and having traded for Jimmy Graham. Darren Fells‘ NFL transition also began in Seattle as a UDFA, after a college basketball career.

A starter for all 30 games during Baylor’s 2020-21 national championship-winning season, Vital averaged 5.6 points and 6.7 rebounds per game as a senior. Vital scored six points but was crucial on the offensive glass during Baylor’s win over Gonzaga in April, grabbing eight offensive rebounds in the runaway victory.

He is expected to line up at tight end, Rapoport adds. This is certainly the common position for ex-hoops cogs, as Graham, Fells, Julius Thomas, Antonio Gates and others have shown. Though, Fant became a tackle.

The Trail Blazers signed Vital for summer league action this year, but the 24-year-old will make the much rarer move to the NFL. The Louisiana native has not played football since the eighth grade, however.