WFT will have most of their defensive line when they take on the Eagles on Tuesday night. Washington Football Team announced that they’ve activated the following four players from the reserve/COVID-19 list:

Sweat, who is currently on injured reserve, was also designated for return, meaning his return to the field is imminent. Washington has been without Sweat since Week 8. The first-string defensive end had been recovering from a fractured jaw, and he intended to return to practice on Wednesday. A first-round Washington draftee, Sweat has registered four sacks this season and has 20 for his career. The Mississippi State product has forced two fumbles in each of his three seasons.

When fully healthy, Allen and Sweat should sit atop the depth chart. Smith-Williams and Toohill, who have both been forced into significant roles on the defensive line following injuries to Sweat and Chase Young, will be able to settle back into their backup/special teams roles.

We learned yesterday that the NFL was pushing Sunday’s WFT/Eagles game to Tuesday.

Washington shockingly won the NFC East last season thanks to the strength of their young defense, and now they’re locking up a key member of that defense. The team reached agreement on a four-year extension worth a whopping $72MM with defensive lineman Jonathan Allen, his agency Team IFA announced on Twitter.

Per his agents, the deal comes with a massive $30MM signing bonus. We heard in early June that the two sides had commenced extension talks, and things came together relatively quickly. The 2017 first-round pick was previously set to enter the final year of his rookie deal under the fifth-year option.

Allen became a starter immediately after getting drafted 17th overall, but was limited to five games as a rookie due to a Lisfranc injury. He bounced back in a big way in his sophomore season, starting all 16 games and racking up eight sacks. Since his rookie campaign, he’s missed only one game.

An interior lineman who can be a wrecking ball in the run game, Allen has also shown a good amount of pass-rushing upside. After notching eight sacks in 2018, he had another six the following year. He only had two this past season as he didn’t play quite as prominent a pass-rushing role, but he still had 14 quarterback hits.

The $18MM average annual salary for his new pact ranks him fifth in the league among interior defensive linemen, as Nicki Jhabvala of the Washington Post tweets.

Allen only turned 26 earlier this year, and is now signed through the 2025 season. With fellow youngsters Chase Young, Daron Payne, and Montez Sweat all still on their rookie deals, Washington’s defensive front has a very bright future.

The oldest of Washington’s four first-round defensive linemen, Jonathan Allen is going into his fifth-year option season. Washington, however, will explore keeping the defensive tackle around for much longer.

Allen confirmed Wednesday he and the team have begun extension negotiations, per the Washington Post’s Nicki Jhabvala (on Twitter). The 2017 first-round pick said in May he wanted to stay in the nation’s capital long-term; he reiterated that hope Wednesday and would prefer to have a new deal by the start of training camp.

Since selecting Allen, Washington added Daron Payne (2018), Montez Sweat (’19) and Chase Young (’20) in Round 1. The team has invested tremendous draft capital on its defensive front, but Sweat and Young can be kept on their rookie deals well into the 2020s. With Ryan Kerrigan gone, Washington has an opening for a veteran-contract D-lineman.

Allen, 26, has bounced back well from an injury-marred rookie year. After a Lisfranc injury limited the Alabama product to just five games in 2017, he has missed just one contest over the past three seasons. Pro Football Focus rated Allen as a top-20 interior D-lineman last season. Between the 2018-19 campaigns, Allen totaled 14 sacks and 25 quarterback knockdowns. He will command a lucrative extension.

DeForest Buckner and Chris Jones did well to bridge the gap between Aaron Donald and the D-tackle field, salary-wise, last year. The Colts and Chiefs standout inside rushers, respectively, signed for $21MM and $20MM per year. This range would figure to be an Allen target, though it might be a bit too lofty for Washington’s tastes. The Grady Jarrett and Kenny Clark re-ups (for $17.5MM and $17MM on average, respectively) may be more relevant to the Washington-Allen negotiations.

Washington DT Jonathan Allen has been a part of the team’s dysfunctional Bruce Allen regime and a part of the new Ron Rivera era. Apparently, he likes what he has seen from Rivera and is excited about the direction the team is heading. 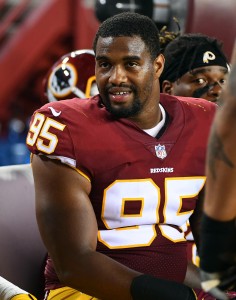 “[W]e’re moving in the right direction, from the front office to the players, and I love everything that we’re building here,” Allen said (via Nicki Jhabvala of the Washington Post). In speaking about his long-term goals, he added, “[i]t’s always been my dream to play my career in one spot. … This is my home. This is where I want to stay.”

WFT presumably shares those sentiments. Allen, the No. 17 overall pick of the 2017 draft, has largely lived up to his billing. Although a Lisfranc injury limited him to five games in his rookie campaign, he missed only one contest over the subsequent three seasons. He notched just two sacks in 2020 after recording 14 sacks across the 2018-19 seasons, but his 14 QB hits last year actually represented an increase from the 10 he posted in 2019. Pro Football Focus also gave him a terrific 83.7 pass-rushing grade, and PFF considered him the 18th-best interior defender in the league out of 125 qualifiers.

Washington has invested significant draft capital in its defensive front over the past few years, and that strategy is paying off. The team yielded the second-fewest yards per game and the fourth-fewest points per game last year, and Allen was a key component of that success. He is scheduled to play out the 2021 campaign under the fifth-year option of his rookie contract, which will pay him a little more than $10MM.

At this point, we haven’t heard anything to suggest that negotiations on a long-term extension have taken place, though it’s likely that the club has at least discussed parameters with Allen’s camp. However, those talks could be tricky. The top of the 4-3 interior defender market includes AAVs of $20MM and above, and Allen may shoot for a deal in that range. But unlike those $20MM players, Allen has not yet earned a Pro Bowl bid, nor has he put together a double-digit sack campaign, so Washington would likely be looking for something closer to a $15MM/year deal.

It’s official. On Monday, the Redskins announced that they have exercised their fifth-year option on defensive lineman Jonathan Allen. 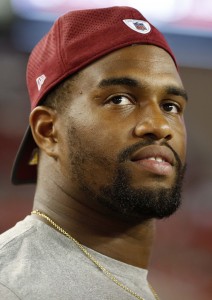 NFL teams have until May 3rd to exercise, or decline, the 2021 option for first-round draft picks from the 2017 class. As shown in PFR’s tracker, several players are already ticketed for a fifth year. Some of them were easy calls, including Jets safety Jamal Adams and Bills cornerback Tre’Davious White. Others – like Browns tight end David Njoku – required a little bit of extra thought.

Allen was one of the easier calls. After much of his rookie year, Allen has notched 14 sacks across the last two seasons for the Redskins. The Alabama product will have some additional help this year, thanks to the addition of Chase Young, who had 17 sacks in his final year at Ohio State.

Because Allen was drafted outside of the Top 10 (No. 17 overall), the salary figure on his 2021 season is not yet known. For those inside of the Top 10, those figures will correspond to the transition tag amount at their respective positions. In the case of Browns defensive end Myles Garrett (No. 1 overall), he’ll earn upwards of $16MM.

Fifth-year options for players are guaranteed for injury only, but that will change starting next year thanks to the new collective bargaining agreement.

After playing five seasons with the Patriots, receiver Danny Amendola signed with the rival Dolphins in the 2018 offseason. The move happened, in part, because New England did not come close to matching the two-year, $12MM deal he received from Miami, the receiver told Jimmy Hascup of USA Today.

“When free agency broke, I came to the realization that he wasn’t going to really come close to any of the other offers I had,” Amendola said. “I had to make a decision for my family and go down to Miami and continue my career there.”

The Redskins took defensive tackle Jonathan Allen in the first round of last year’s draft but he was limited to just the first five games of his rookie season due to a Lisfranc injury. The Alabama alum is hopeful to be ready for the team’s voluntary OTAs in late April but is not making any guarantees.

“I’m going to be honest, the OTAs they start like end of April, and this will be my first time, so I would like to think so, but I mean, honestly, there’s no way of telling at this point,” Allen said to Stephen Czarda of Redskins.com. “I feel like I’m going to be in a good spot come OTAs, so I’m excited for that, and right now, I’m just taking it day by day just trying to grind.”

Allen tallied a sack and three tackles in five starts last season. He’s projected to start at defensive end in the team’s 3-4 scheme alongside Matthew Ioannidis, with Evander Hood at nose tackle. There are still viable defensive-line options on the free-agent market as well, including Johnathan Hankins, Bennie Logan and Charles Johnson, among others. Stacy McGee and Anthony Lanier are projected to immediately back up Allen and Ioannidis on the defensive line.