Very shortly after his arrival in San Francisco, Tashaun Gipson is already back on the open market. The veteran is being released, per ESPN’s Adam Schefter (Twitter link).

The 32-year-old signed last week, providing the team with an experienced option on the backend – something which was deemed necessary given the uncertainty surrounding starter Jimmie Ward. The latter, it has seen been learned, will likely miss at least the first month of the regular season as he recovers from a hamstring injury.

That makes the Gipson release somewhat surprising, and leaves the 49ers in the same situation they were in before their preseason finale at safety. Gipson could have been a starter, given his extensive experience with the Browns, Jaguars, Texans and, most recently, Bears. His struggles in pass coverage likely contributed to his lengthy stretch as a free agent, however.

San Francisco has Tarvarius Moore and George Odum as internal options to replace Ward as a starter alongside 2021 fifth-rounder Talanoa Hufanga. They will also have some added flexibility from a financial standpoint after re-working Jimmy Garoppolo‘s contract if they wish to add another free agent. One option could be Anthony Harris, who was let go earlier today by the Eagles.

Gipson, meanwhile, will join Harris in looking for a new landing spot – either on San Francisco’s practice squad or a 53-man roster elsewhere – in the days leading up to the regular season.

Not long after they hosted him for a workout, the 49ers are indeed adding a veteran to their safety room. San Francisco is signing Tashaun Gipson, reports ESPN’s Adam Schefter (on Twitter).

The 32-year-old auditioned for the 49ers last week, so the deal comes as little surprise. Gipson is coming off of a two-year stint in Chicago where he posted a pair of interceptions in each campaign. His age and struggles in pass coverage left him on the open market deep into the offseason, however, a stark contrast to the regard he was held in earlier in his ball-hawking career.

The former UDFA has recorded at least one pick in each of his 10 seasons in the league, including six in his lone Pro Bowl campaign in 2014. Especially if he plays a more limited role than he is accustomed to (he has logged a snap share of at least 91% during every year since his rookie season), then, Gipson should be able to provide quality play on the backend for the 49ers.

San Francisco may, at least temporarily, need the Wyoming alum to start, however. Jimmie Ward is currently sidelined with a hamstring injury, and his Week 1 availability remains in doubt. The questions surrounding Ward likely drove the team’s search for a veteran insurance policy, especially one like Gipson who has 132 starts to his name. Other options on the roster include Tarvarius Moore and George Odum to pair with Talanoa Hufanga at safety during Ward’s absence.

The 49ers will be the fifth team Gipson suits up for, joining the Browns, Jaguars, Texans and Bears. He likely won’t be able to replicate the success of earlier in his career, but could prove to be an effective addition especially if Ward ends up missing any significant time.

The 49ers are eyeing a veteran safety. ESPN’s Field Yates reports (via Twitter) that the team worked out defensive back Tashaun Gipson.

Gibson spent the past two seasons with the Bears, starting each of his 28 games. While he was more than serviceable during the 2020 campaign, he appeared to take a step back in 2021, with Pro Football Focus ranking 85th among 92 qualifying safeties. Coupled with him missing five games, it seems pretty clear why the 32-year-old remains unsigned in August. This is the first reported visit for Gipson.

However, he apparently has a suitor in the 49ers. Jimmie Ward is currently sidelined with a hamstring injury, and it’s uncertain if he’ll be ready to go for the start of the regular season. With San Francisco eyeing a current depth chart that features Talanoa Hufanga, Tarvarius Moore, George Odum, and Dontae Johnson, the team is considering adding a veteran to the mix.

While Gibson struggled in 2021, there’s no denying his experience. Despite going undrafted in 2012, he’s started 132 of his 140 games in his career. He earned a Pro Bowl nod back in 2014 after finishing with a still-career-high six interceptions. The safety has hauled in an interception in each season of his career.

The Bears have agreed to re-sign safety Tashaun Gipson, according to Dan Graziano of ESPN.com (Twitter link). Once finalized, it’ll be a one-year deal for the veteran.

Gipson spent time with the Browns, Jaguars, and Texans before joining the Bears as a free agent last year. Brought in to help replace Ha Ha Clinton-Dix, the 30-year-old (31 in August) went on to start in all 16 games last year. In total, he finished out with 66 stops, two interceptions, seven passes defensed, and a fumble recovery. Now, he’ll return to a Bears secondary that is without Pro Bowler Kyle Fuller. Fortunately, the Bears still have All-Pro safety Eddie Jackson to help hold down the fort.

Gipson, a 2014 Pro Bowler, has 25 career interceptions to his credit. He might not be the player that he once was, but he’s coming off of a solid and disciplined season. Last year, Gipson committed just one penalty across 1,130 defensive snaps. 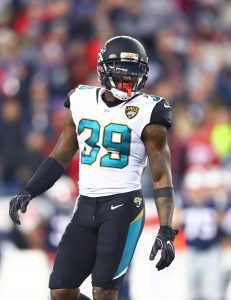