The Browns have signed free agent linebacker Willie Harvey Jr. (Twitter link via NFL.com’s Ian Rapoport). Harvey, who spent time with the Browns a couple years back, could help fill in for Jacob Phillips following his biceps tear. 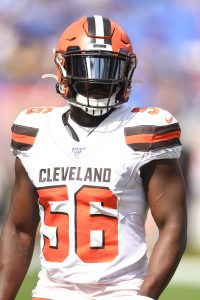 Harvey had a standout career at Iowa State and was widely expected to be a Day 3 pick in 2019. Instead, he went undrafted and wound up signing with the Browns as a UDFA. The 230-pound defender had a solid preseason for the Browns, compiling 10 tackles and one pass defended. He didn’t make the final cut, but he did manage to earn a promotion from the taxi squad and see time in a couple of games that year.

Harvey hasn’t seen live action since ’19, but Phillips’ (likely) season-ending injury could open the door for him. Plus, with Sione Takitaki‘s hamstring trouble, he should be able to get some preseason snaps. The Browns will face the Giants on Sunday before wrapping their exhibition slate against the Falcons on Aug. 29.

Willie Harvey Jr. has been promoted to the NFL. NFL.com’s Ian Rapoport reports (via Twitter) that the Browns have elevated the rookie linebacker from the practice squad.

The 23-year-old had a standout career at Iowa State, and some pundits projected the linebacker to be a late-round pick. However, Harvey Jr. ended up going undrafted in the 2019 draft, and he subsequently caught on with Cleveland.

The 230-pound defender had a solid preseason for the Browns, compiling 10 tackles and one pass defended, but he was waived by the team in late August. He quickly caught on with Cleveland’s practice squad.

Browns starting linebacker Christian Kirksey is seeking opinions on a torn bicep, and he’s already been ruled out for this weekend’s game against the Rams. While one of Malik Jefferson, Sione Takitaki, or Mack Wilson will likely get the first crack at the starting gig, Harvey Jr. could find himself making his NFL debut tomorrow night.

The Browns signed 15 undrafted free agents earlier this week, but they still had an additional 34 rookies participate in their rookie minicamp on a tryout basis. Ultimately, Cleveland signed three of those 34 players to contracts (per Nate Ulrich of Ohio.com):

As Ulrich notes, Dean was a standout during the Browns’ rookie minicamp, as he had an interception and a pass defended during the first practice. Of course, the defensive back will still have an uphill battle to make the roster; the team used a pair of their draft picks on cornerbacks in Greedy Williams (second round) and Donnie Lewis Jr. (seventh round). The team also added undrafted free agent Jermaine Ponder (Saint Francis Pa.).

The same could be said for Harvey Jr., as the Browns selected a pair of linebackers during the draft in Sione Takitaki (third round) and Mack Wilson (fifth round). Cleveland also added an undrafted linebacker, Anthony Stubbs (Prairie View A&M).

With Gray and Dean under contract, the Browns now have eight former Miami Hurricanes on their roster. The six-foot-2, 235-pound Gray served mostly as a block running back during his collegiate career.