Tahir Whitehead is ending his NFL career where it began. The veteran linebacker is set to retire as a member of the Lions, reports Justin Rodgers of the Detroit News (Twitter link). 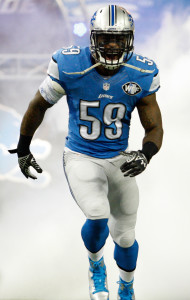 Whitehead was a fifth-round pick of the Lions in 2012. It took until his third year with the team to play his first defensive snap, but he had established himself as a full-time starter by the time he departed Detroit. Overall, he started 54 of 93 contests in the Motor City, eclipsing the 100-tackle mark in 2016 and 2017.

The following offseason, Whitehead signed a three-year, $19MM deal with the Raiders. He remained a productive starter there, playing every defensive snap in 2018 and racking up 234 tackles between his two seasons. His tenure in Oakland was cut short by one year, however, as he was released in 2020 amidst struggles in pass coverage.

That led to a pair of one-year stints for the 32-year-old. The first came in Carolina, where Whitehead saw a major reduction in workload. Logging a snap share under 50% for the first time in seven years, he still made 51 tackles, adding an interception and fumble recovery. Last season with the Cardinals, though, he was limited to just three games of special teams duty as a member of Arizona’s practice squad.

Overall, Whitehead will hang up his cleats with just over $26MM in career earnings. The TCU alum totaled 685 tackles and three sacks over his 10 years spent in the NFL, many of the best of which coming in Detroit, making his ceremonial return to the team a logical move.

Tahir Whitehead got a look from the Texans earlier this week. NFL Network’s Ian Rapoport reports (via Twitter) that Houston hosted the free agent linebacker. The veteran presumably left the team without a deal.

The 2012 fifth-round pick had a productive stint with the Lions to begin his career. Whitehead spent six seasons in Detroit, and he averaged 70 tackles and 5.8 tackles for loss between the 2014 and 2017 seasons. That four-year stint earned Whitehead a three-year, $19MM deal from the Raiders, and the linebacker started all 32 games for the organization before getting his walking papers in 2020.

The 31-year-old caught on with the Panthers last offseason, and he started each of his first eight games for his new squad. However, Whitehead saw a reduced role as the season went on, and he only saw 15 defensive snaps from Week 11 to the end of the season. The linebacker finished his lone season in Carolina with 51 tackles and one interception.

The Texans were busy revamping their linebackers corps this offseason, bringing in eight free agents and one rookie. However, Zach Cunningham and (perhaps) free agent acquisition Christian Kirksey are the only sure things on the depth chart, meaning a free agent like Whitehead could still come in and claim a roster spot.

Released by the Raiders earlier this month, Tahir Whitehead will have another opportunity to be a starter. The Panthers are signing the free agent linebacker, Ian Rapoport of NFL.com tweets.

Whitehead played in all 32 games during his two-season Raider tenure and was the team’s runaway tackles leader during its final two Oakland seasons. The Panthers saw Luke Kuechly retire earlier this offseason; Whitehead will be in line to move into the starting lineup alongside Shaq Thompson.

Carolina has lost Kuechly and all-time tackles leader Thomas Davis in consecutive offseasons. The team extended Thompson late last season but has a need for another three-down linebacker. Whitehead saw by far the most snaps among Raiders ‘backers from 2018-19 and was a Lions starter in the years prior.

Whitehead, who will turn 30 next week, has only missed three games in an eight-year career. He has produced four straight 100-plus-tackle seasons, leading the Lions in that department during his final two years in Detroit.

Tahir Whitehead‘s Raiders run will end after two seasons. The team released the veteran linebacker on Monday, Field Yates of ESPN.com tweets. The Raiders have since announced the move. 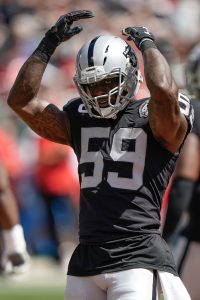 One season remained on Whitehead’s three-year, $19MM deal. The Raiders cutting Whitehead will save them $6.25MM, bumping their cap-space figure up north of $56MM.

Set to turn 30 in two weeks, Whitehead provided durability in Oakland. Part of Jon Gruden‘s initial free agency class upon coming back to the NFL, Whitehead started all 32 Raiders games during his tenure. He has not missed a start since the 2016 season and has only missed three games in his eight-year career. The former Lions starter also extended his streak of 100-tackle seasons to four during the Raiders’ Oakland swansong, posting 108 stops.

Whitehead was by far Oakland’s tackles leader in each of his two seasons there, registering 126 in 2018. But he is no longer in line to be part of the franchise’s Las Vegas run.

This will leave the Raiders in need at multiple linebacker spots. They relied on Whitehead last year after signings of Vontaze Burfict and Brandon Marshall did not work out. Although Burfict has since been reinstated from his suspension, the perpetual suspension risk is certainly no lock to come back. No Gruden-era draftee resides on Las Vegas’ roster at linebacker, pointing the Raiders toward addressing this area in both free agency and the draft.