There has been an update to the incident involving free agent running back Adrian Peterson earlier this week. As detailed in an ESPN report, the Los Angeles County District Attorney’s Office is not pressing felony charges. 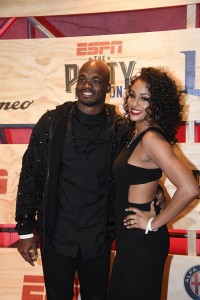 The case will now be examined by the Los Angeles City Attorney, who could still bring forth a misdemeanor domestic violence charge. The incident between Peterson, 36, and his wife occurred Sunday before a flight was set to take off from Los Angeles to Houston. Peterson was removed from the flight before takeoff, and all other passengers landed in Houston without further issue.

In response to the arrest, Peterson said, “Me and the wife got into an argument on the plane. That was pretty much the gist of it. I ended up grabbing her hand and taking her ring off her finger… We just had a disagreement”. He also reiterated that his wife, Ashley, is not pressing charges.

Ashley also said in an Instagram post, “On Sunday, Adrian and I had a verbal argument. Unfortunately it was on an airplane. At no point did Adrian hit or strike me. This is a private matter between my husband and myself. We ask that everyone respect our privacy”.

Peterson appeared in four games in 2021, suiting up for the Titans and Seahawks. He currently ranks fifth all time in rushing yards; if he does play next season, as he intends, he will likely eclipse the 15,000 yard plateau.

Free agent running back Adrian Peterson was arrested at Los Angeles International Airport on Sunday on a felony domestic violence charge. As The Washington Post’s Nicki Jhabvala writes, the incident took place in the morning onboard an airplane flying to Houston. 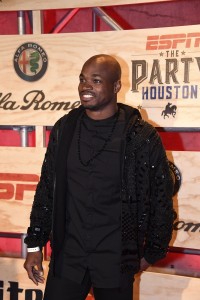 According to a statement from the Los Angeles Airport Police, they were called to respond to “a verbal and physical altercation between a male suspect and a female victim”, later identified as Peterson and his wife. Peterson was removed from the plane before it took off, and his wife and the other passengers completed the flight without further issue.

A representative for Peterson released a statement which reads in part, “this is a private misunderstanding between husband and wife and we anticipate it will all be resolved shortly”. Peterson was taken into custody with a $50K bail and released on bond later in the day. ESPN’s John Keim adds that his wife “was not going to press charges”. Peterson pleaded no contest to a misdemeanor reckless assault charge committed against his then-four-year-old son in 2014.

The 36-year-old continued his career by signing with the Titans midseason, after they lost Derrick Henry to injury. Not long after, he found himself in Seattle, though he only appeared in four total games in 2021. The former league MVP has bounced around to six teams since his illustrious tenure in Minnesota. Just shy of 15,000 career rushing yards, which ranks him fifth all time, he intends to play in 2022.

The Seahawks are promoting Adrian Peterson from the practice squad (Twitter link via Jeremy Fowler of ESPN.com). With that, Peterson is set to play against the 49ers on Sunday afternoon.

Peterson signed with the Seahawks’ taxi squad on Wednesday, providing insurance for Seattle’s badly battered backfield. Already without starting running back Chris Carson, the Seahawks will also be without backup Rashaad Penny for a while. Travis Homer, who has performed well in a very limited sample size, remains questionable with a calf injury. That’s left Alex Collins in the lead role — he’s registered 395 yards and two touchdowns this year off of 101 totes.

Peterson, 36, has just 27 carries for 82 yards and one touchdown so far this year, from his time with the Titans. His last full-time action came in 2020 with the Lions, when he recorded 604 yards and seven rushing touchdowns with a so-so 3.9 yards per carry average.

He might not be the player he once was, but Peterson could help the Seahawks’ struggling offense move the chains in small doses. He’ll also have a chance at history — another 367 rushing yards will put him in the 15,000-yard club for RBs.

Adrian Peterson has added another stop to his illustrious resume. The veteran running back is signing with the Seahawks, head coach Pete Carroll told reporters (via Bob Condotta of The Seattle Times on Twitter). Peterson will initially join the team’s practice squad before getting elevated to the active roster. The running back worked out for the Seahawks earlier today. 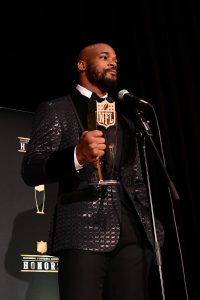 The Seahawks have dealt with injuries to the running backs corps all season long. The team already lost starting running back Chris Carson for the season, and Rashaad Penny is currently dealing with an injury of his own (although Carroll told reporters that the running back may be able to play this weekend and will avoid an IR stint for now (via Condotta)). Seattle’s struggling ground game has been led by Alex Collins, who has turned 101 carries into 395 yards and two touchdowns. The team is also rostering DeeJay Dallas and Travis Homer, and they have Josh Johnson stashed on the practice squad.

While Peterson has had a Hall of Fame-worthy career, it remains to be seen if he can provide more than any of Seattle’s current options at the position. The 36-year-old saw time in three games (two starts) for the Titans this year, collecting only 90 yards and one touchdown on 31 touches (good for 2.9 yards per touch). Peterson was waived by Tennessee in late November. Peterson’s last full-time action came in 2020 with the Lions when he notched 604 yards and seven rushing touchdowns.

He’ll have an opportunity to join the 15,000-yard club for running backs, and with 367 more rushing yards, he would pass Barry Sanders for fourth all-time. His NFL career followed a standout stint at Oklahoma, and Carroll told reporters that he tried to recruit the running back while he was at USC (via Condotta). 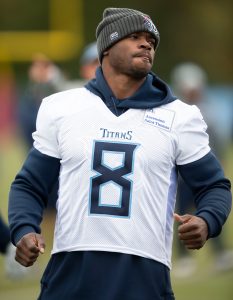 Peterson joined the Titans earlier this year, following Derrick Henry‘s injury. He wound up seeing time in three games (two starts), collecting 90 yards and one touchdown on 31 touches. The 36-year-old was effectively leapfrogged by Dontrell Hilliard, however, leading to his late November release.

Peterson’s last full-time action came in 2020 with the Lions when he notched 604 yards and seven rushing touchdowns. He compiled more than 1,000 yards from scrimmage as recently as 2019, and he rushed for 1,042 yards and seven scores with Washington in 2018.

The Titans have released Adrian Peterson, per a club announcement. Peterson, who signed with the Titans just three weeks ago, will be available to the rest of the NFL on the waiver wire.

Following the injury to Derrick Henry, the Titans signed the future Hall of Famer to their practice squad. Peterson ended up getting into three games (two starts) with Tennessee, collecting 90 yards and one touchdown on 31 touches. The 36-year-old was held to a season-low 15 offensive snaps on Sunday, with Dontrell Hilliard getting the bulk of the looks at RB. Hilliard’s performance (82 total yards) probably spelled the end of AP’s stint with the Titans. For the time being, the team will move forward with Hilliard, D’Onta Foreman, and Jeremy McNichols as their running back group.

Peterson’s last full-time action came in 2020 with the Lions when he notched 604 yards and seven rushing touchdowns. He compiled more than 1,000 yards from scrimmage as recently as 2019, and he rushed for 1,042 yards and seven scores with Washington in 2018. There’s a chance he still finds another gig during the 2021 campaign; we previously heard that the Ravens, Raiders, Bills, Falcons, and Dolphins all expressed interest in Peterson before he signed with the Titans.

Peterson, 36, is still less than 200 rushing yards away from the 15,000 mark. Depending on where he lands, he could be just a few weeks away from joining Emmitt Smith, Walter Payton, Frank Gore and Barry Sanders in the elusive club. He’s also about 500 yards away from leapfrogging Sanders for fourth all time in rushing yards and six rushing TDs away from besting Marcus Allen for third place.

Veteran running back Adrian Peterson signed with the Titans this week after the team placed stud RB Derrick Henry on IR. And though his audition with Tennessee was the first time we heard anything on Peterson since July, there was apparently a fair amount of interest in his services.

Per Adam Schefter of ESPN.com, the Ravens, Raiders, Bills, Falcons, and Dolphins all expressed interest in Peterson, the three-time NFL rushing leader. Peterson also says Dancing with the Stars — which has made a habit of casting current and former NFLers — made him an offer in September, an offer that he declined because he believed he would have the opportunity to sign with Baltimore.

The Ravens lost their top three RBs before the season even started, and they ended up signing veterans Latavius Murray, Devonta Freeman, and Le’Veon Bell to help fill the void, so Peterson was right to think that he might get a shot in Baltimore. That obviously didn’t happen, but the future Hall-of-Famer will get a prime opportunity with Tennessee.

At 6-2, the Titans are currently at the top of the AFC standings, so Peterson will immediately get some action for a playoff contender, something he did not get to experience over the last three seasons (he spent 2018-19 with the Washington Football Team and 2020 with the Lions). Of course, losing Henry — the engine that makes Tennessee’s offense run, with all due respect to A.J. Brown and Ryan Tannehill — could seriously undermine the club’s chances at securing a first-round bye.

Speaking of Henry, Schefter passes along some bad news for Titans fans. The last report on Henry’s foot injury suggested that he might be back as soon as Week 15, or at least in time for the playoffs, but one source tells ESPN that it would be very surprising if Henry were able to return at all this season.

Without Henry, the Titans will forge ahead with Peterson, Jeremy McNichols, and D’Onta Foreman.

The Titans are promoting Adrian Peterson from the practice squad to the 53-man roster (Twitter link via NFL.com’s Mike Garafolo). Garafolo adds that this is not a weekly elevation, so Peterson is now a full-fledged member of the active roster.

Peterson signed a taxi squad deal earlier this week to help fill in for the injured. Derrick Henry. The Titans’ star RB will be out for 6-to-10 weeks with a foot fracture and Peterson should help to keep the ground game moving. Jeremy McNichols is still expected to serve as the Titans’ RB1 on Sunday, but don’t be surprised if Peterson gets involved quickly.

Peterson’s last action came in 2020 with the Lions when he notched 604 yards and seven rushing touchdowns. The 36-year-old needs another 180 rushing yards to hit 15,000 lifetime. And, with another 500 yards, he’ll top Barry Sanders for fourth all time on the list.

He’ll try to add to those totals with the Titans, starting this weekend against the Rams.