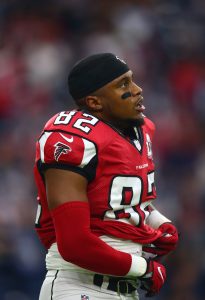 Perkins, a former undrafted free agent out of Washington, spent the first two seasons of his career with the Falcons. He appeared in nine games for the Eagles last season, hauling in five catches for 67 yards. After getting waived after the 2019 preseason, Perkins caught on with Philly’s practice squad.

The Eagles were one of the few NFL teams rostering two tight ends. If Ertz is ultimately sidelined with a hamstring injury, the team would have needed another healthy body besides Dallas Goedert. While Goedert would presumably get the majority of snaps at tight end in Ertz’s hypothetical absence, there’s still a good chance that Perkins would make his 2019 debut against the Dolphins.

The Eagles added LeBlanc to their roster last November, and he proceeded to collect 24 tackles and one pass defended in eight games (four starts) with Philly. The 25-year-old inked a one-year extension with the team back in September, and he was later placed on injured reserve with a foot injury. He was designated to return earlier this week.

Huggins was signed off the Texans practice squad back in October. The defensive tackle ended up playing in four games for Philadelphia, compiling three tackles.

Richard Rodgers will return to action after the Eagles made the decision to activate him Friday, per Jeff McLane of Philly.com (on Twitter).

The former Packers tight end returned to practice recently, and the Eagles aren’t wasting time getting him ready for game action. He’s been on IR throughout the season and has not played for his new team yet. Rodgers is signed to a one-year deal, so the next batch of Eagles games will be key for his value going forward.

The fifth-year target’s best season came in 2015, when he caught 58 passes for 510 yards and eight touchdowns — one of those a final-play game-winner from Aaron Rodgers in Detroit — but he managed just 12 receptions for 160 yards last season in 15 Green Bay games. He’ll fill in as depth behind Ertz and Goedert for an Eagles team clinging to playoff aspirations.