After releasing Tourek Williams last week, the Chiefs have filled his roster spot by signing linebacker Marcus Rush (via Terez A. Paylor of the Kansas City Star). 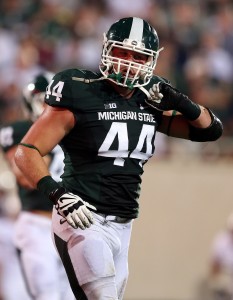 Following a collegiate career that saw him win a Big Ten Championship and the Rose Bowl, the undrafted free agent out of Michigan State initially joined the 49ers practice squad, where he spent two seasons. He was signed by the Jaguars in December, but he was ultimately released by the organization in May. The 25-year-old was a standout during the 2016 preseason, leading the league with six sacks, so the defender clearly has what it takes to compete in the NFL.

Of course, Rush still has an uphill battle to make the Chiefs roster. There are a number of linebackers competing for a reserve spot on the squad, including Tamba Hali, Frank Zombo, Dadi Nicolas, Ukeme Eligwe, Justin March-Lillard, Terrance Smith, and D.J. Alexander.

Speaking of Williams, ESPN’s Adam Caplan notes (via Twitter) that the team released the linebacker with the rare “failure to disclose physical condition” designation.