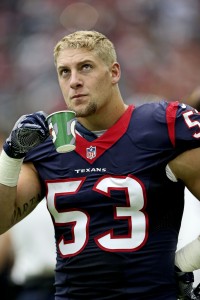 The Texans moved relatively swiftly to remove Bullough from their roster earlier this year, waiving less than a month after news of his suspension dropped. Bullough, 25, wasn’t a high-impact player during his time in Houston, at least on defense, as he started only four games in three seasons. However, he did play a large role on special teams, playing more than half the Texans’ snaps in that facet of the game.

Bullough is free to sign with any club, but his concurrent suspensions clearly make him an uninteresting asset. It’s possible he could draw more interest near midseason when his ban is nearing an end.

The NFL announced that Texans linebacker Max Bullough has been hit with a four-game suspension. The ban comes after a violation of the league’s PED policy.

“As a dedicated member of this team, it is very disappointing to have to miss the first four games of the season and not be out there with my teammates,” Bullough said in a statement issued via social media. “I sincerely apologize to my family, the entire Texans organization, my teammates and our fans for this situation. It is my responsibility to know the ingredients of every supplement that I use, so I take full responsibility for what happened and will work as hard as I can to be ready to contribute when I return..”

Bullough, a Michigan State product, appeared in every game for Houston last season and even made three starts. He had 19 tackles in total, however, and only saw the field for 240 defensive snaps (129 snaps against the run, 94 on passing plays).

Bullough projects as the Texans’ first inside linebacker off of the bench, behind starters Brian Cushing and Benardrick McKinney. However, his four-game suspension could affect his standing with the team. Brian Peters, who was signed from the Vikings’ practice squad in 2015 on the same day that Bullough was promoted to Houston’s 53-man roster, is also in the fold at inside linebacker.

Here are Wednesday’s minor signings, cuts, and other transactions from across the NFL:

With just four weeks left in the NFL season, 19 of the league’s 32 teams are at least two games over .500, vying for 11 available playoff spots — the 12th will go to a team currently two games under .500, in the NFC South. With so many clubs still in the hunt, we can expect to see plenty of roster tweaks down the stretch, as coaches and front offices try to get the most out of their 53-man squads. Here are Wednesday’s minor moves from around the NFL: