The Cardinals have agreed to a one-year deal with free agent cornerback Jumal Rolle, the club announced today. Rolle was originally tendered by the Ravens as a restricted free agent in March, but Baltimore quickly rescinded its original round offer, making Rolle a free agent. 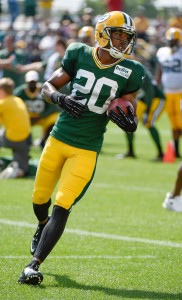 Despite the fact that finding a cornerback to play opposite Patrick Peterson was a glaring need for the Cardinals this offseason, Arizona surprisingly didn’t add a corner during the free agent period or during the draft. Additionally, only two of the Cards’ 17 undrafted free agent signings were cornerbacks. Having lost free agent Marcus Cooper to the Bears, Arizona’s options at cornerback behind Peterson now include Justin Bethel, Harlan Miller, Brandon Williams, Eli Bouke, and Trevon Hartfield.

Rolle, admittedly, probably isn’t the top-notch starting option the Cardinals may be looking for, as he’s never started a contest during his three-year NFL career. But Rolle does offer experience (18 career games) and can also to Arizona’s depth on special teams, where the club ranked a paltry 30th in DVOA last season.

Originally an undrafted free agent out of Catawba, the 26-year-old Rolle bounced around the league before landing in a stable reserve role for the Texans in 2014. After joining the Ravens late in the 2015 campaign, Rolle tore his Achilles during the following offseason and missed the entirety of the 2016 season.

The Ravens have suffered their first season-ending injury of 2016, according to Jeff Zrebiec of the Baltimore Sun, who reports that cornerback Jumal Rolle tore his Achilles tendon recently while participating in a workout. Rolle is expected to be sidelined until 2017, per Zrebiec.

Rolle, who turns 26 later this month, may not have played a huge role in Baltimore this season even if he had stayed healthy, but he had the opportunity to earn a spot on the 53-man roster and see some action on special teams, if not in the Ravens’ secondary.

The former undrafted free agent appeared in 10 games for the Texans in 2014, recording 19 tackles and three interceptions. Rolle was cut by Houston last season, at which point the Ravens picked him up, adding him to their practice squad. He received a promotion to the 53-man roster in December, and was active for one game down the stretch.

As an exclusive rights free agent, Rolle had been on a one-year contract, so if the Ravens intend to bring him back when he’s healthy, they’ll have to sign him to a new deal for 2017.

Here are Tuesday’s minor moves from around the NFL: