Dan Bailey has missed seven kicks over his past two games, and the Vikings are looking into a potential replacement. They worked out Chandler Catanzaro on Tuesday.

The Vikings signed Bailey shortly after then-rookie Daniel Carlson‘s tough day in Green Bay during a September 2018 tie game. Bailey fared worse Sunday in Tampa, missing three field goals and an extra point. Against the Jaguars in Week 13, Bailey missed three kicks. His misses in Florida impacted the NFC playoff race, elevating the Cardinals to the No. 7 spot and dropping the Vikings to 6-7.

Catanzaro, however, has not kicked since the 2018 season. The Buccaneers cut him midway through that slate, but the Panthers used him as a Graham Gano replacement in four games. Catanzaro is best known for his three-year Cardinals run from 2014-16; he also kicked in 16 games for the 2017 Jets.

The free agent’s career 83.8% field goal make rate sits nearly 3% behind Bailey’s career mark (86.0), but the former Cowboys specialist certainly has weakened his standing with the Vikings after his two most recent showings. This season, Bailey has missed six field goals. He exited Week 14 with what would be a career-worst 66.7% connect rate.

If the Vikings began giving Catanzaro COVID-19 tests Monday, he could kick in their Week 15 game. Players must pass six days’ worth of coronavirus tests before suiting up with new teams. The Vikings released kicker Tristan Vizcaino from their practice squad Tuesday, clearing the way for another potential Bailey replacement to be added.

The Panthers auditioned kickers Chandler Catanzaro, Lirim Hajrullahu, and Louie Zervos on Thursday, according to the league’s transactions wire. All three could serve as insurance for current kicker Joey Slye, who just missed a 54-yarder that would have sealed the deal against the Vikings.

Slye’s job isn’t necessarily in jeopardy. His 77.4% field goal conversion doesn’t jump off of the page, but two of his attempts were from 65+ yards out. Take those out of the equation, and he’s got a much more respectable ~83% rate. In general, the Panthers have confidence in Slye — his 8-of-11 success rate from 50+ yards last year allowed them to part ways with the talented, yet pricier, Graham Gano.

Catanzaro is the biggest name of the workout bunch, though we haven’t seen him on the field in a while. The 29-year-old’s last live action came towards the end of the 2018 season. In 2019, he hooked on with the Jets and retired soon after (we can’t blame him). This year, he had a cup of coffee with the Giants, but lost out to Gano. Catanzaro is best known for his early work with the Cardinals — he sank 87.9% of his kicks as a rookie in 2014 and 90.3% of his tries in 2015.

After the bye, Panthers will look to bounce back against the Broncos.

The Giants have agreed to sign Chandler Catanzaro, according to Adam Schefter of ESPN.com (on Twitter). Catanzaro will enter camp as the Giants’ frontrunner for the kicking job, which has been freed up by the release of Aldrick Rosas.

Catanzaro, 29, hooked on with the Jets last March. After a rocky training camp and equally rough start to the preseason, he announced his retirement. Now, he’s coming back for New Jersey’s other team.

The Clemson product had a tremendous start to his career with the Cardinals. Catanzaro nailed 87.9% of his kicks as a rookie and 90.3% of his tries in 2015. His success rate dipped to 75% in 2016, but bounced back a bit with the Jets in 2017, making 83.3% of his kicks and all of his PATs. Then, he dipped once again. His three-year deal with the Bucs was torn up pretty quickly after he missed two field goals in a loss to the Redskins, ending his Tampa Bay tenure with a weak 73.3% success rate. His last live action came with the Panthers towards the end of the 2018 campaign.

The Giants preferred Catanzaro’s on-field mistakes to Rosas’ off-the-field issues. Earlier this summer, cops alleged that Rosas was behind the wheel in a hit-and-run accident, and authorities suspect that alcohol was involved.

Jets K Chandler Catanzaro, 28, has retired, according to a team announcement. To take his place on the roster, the club has signed K Taylor Bertolet.

Catanzaro’s job was clearly in jeopardy after he missed a pair of extra points in the Jets’ preseason opener. It was reported yesterday that New York would be bringing in kickers Blair Walsh and Chris Blewitt for tryouts, and the Jets are said to still be interested in Ravens’ kicker Kaare Vedvik, who also caught their eye last summer.

In addition to his difficulties in the first preseason game, Catanzaro had apparently struggled in camp as well. Perhaps he saw the writing on the wall and elected to leave the game on his terms rather than being cut.

Catanzaro, a Clemson product, signed with the Cardinals as a UDFA in 2014 and won Arizona’s kicking competition that year. His first two seasons in the league were quite promising, as he nailed 87.9% of his kicks in his rookie campaign and 90.3% in 2015. But his success rate dipped to 75% in 2016, and he signed with the Jets in March 2017. He experienced something of a bounceback in his first stint with Gang Green, converting 83.3% of his kicks and all of his PATs, and he signed a three-year deal with the Buccaneers last offseason. Tampa Bay released him after he missed two field goals in a loss to the Redskins last November — he ultimately made just 73.3% of his kicks with the Bucs — and he caught on with the Panthers for the last few games of the season.

The Jets saw Jason Myers turn in a Pro Bowl effort last year, but they lost Myers to free agency in March and hoped that Catanzaro would be an adequate replacement. Obviously, that did not turn out to be the case, though as Manish Mehta of the New York Daily News tweets, the Jets could at least recoup Catanzaro’s $500K signing bonus if they so choose.

Bertolet was with the Jets last summer and performed well, but he has no regular season experience.

Jets To Stick With Chandler Catanzaro

The Jets are sticking with kicker Chandler Catanzaro – for now. The free agent import has had a rocky training camp, but head coach Adam Gase says the team is not looking to bringing in another leg at this time (via Manish Mehta of the Daily News). 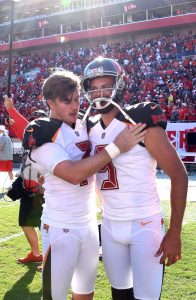 This year, Myers inked a four-year deal with the Seahawks, and the Jets replaced him with Catanzaro, who hasn’t been kicking at a truly elite level since his stellar 2015 season in Arizona. 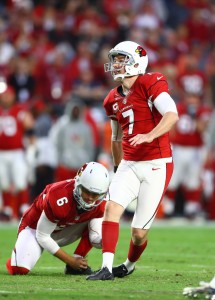