It appears the safety market is back on track. A key member from 2018’s mysterious market will receive a big raise. 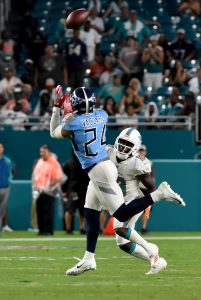 The Titans and Kenny Vaccaro have reached an agreement to keep the former first-round pick in Tennessee long-term, Ian Rapoport of NFL.com tweets. It’s a four-year, $26MM deal, per RapSheet, who adds this will come with $11.5MM guaranteed.

Vaccaro joined Tre Boston and Eric Reid, the latter being the centerpiece of last year’s slowdown, in having to wait months to land deals in 2018. The Titans swooped in and signed Vaccaro on the cheap before training camp, and with Reid having already re-signed to stay in Carolina, Vaccaro’s second team took similar action. Vaccaro’s deal comes in just north of Reid’s.

The former Saints five-year secondary piece started 13 games with the Titans last season. The safety/slot defender will be a part of Tennessee secondaries going forward, and while Landon Collins‘ Redskins deal will grab justified headlines, the seventh-year veteran’s re-up is a good sign for this year’s safety market.