After two major subtractions to their pass rush, the Chiefs are trying to add some reinforcements. The club is expected to sign former Saints defensive end Alex Okafor to a three-year deal, $18MM deal, per Ian Rapoport of NFL.com (via Twitter). Through incentives, the pact can reach up to $24MM. 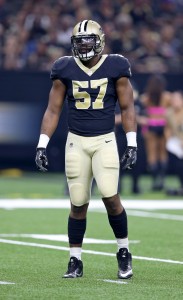 Okafor was having a strong year in 2017 before tearing his Achilles and then re-upped on a cheap deal with the Saints before the 2018 season started. Now fully healthy, Okafor is moving on to KC.

Just days ago, the Chiefs shipped Dee Ford to the Niners in exchange for a 2020 second-round pick. In need of ammo to bolster the pass rush, they’ve added Okafor, a younger and cheaper substitute. Ford’s franchise tag would have called for a $15MM+ salary in 2019. Okafor, meanwhile, stands to earn a $6MM average annual value on his new deal, sans incentives.

Okafor, 27, broke out with eight sacks in his second NFL season. Since then, he’s been productive, but has yet to revisit that mark. Last year, he put up four sacks for the Saints across 16 games (all starts), giving him 22 for his career.