The Chiefs will send Dee Ford to San Francisco. The 49ers have agreed to send their 2020 second-round pick to the Chiefs for the franchise-tagged pass rusher, Albert Breer of SI.com tweets. We heard earlier tonight that the two sides were discussing a trade. 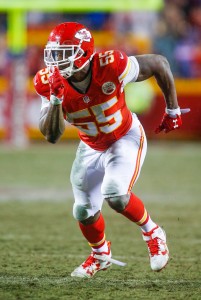 The teams have agreed on compensation, and it sounds like the 49ers and Ford have agreed to an extension. ESPN’s Josina Anderson tweets that Ford has signed a five-year, $87.5MM deal with his new squad. Terez A. Paylor of Yahoo tweets that the deal contains around $45MM in guaranteed money.

The 49ers are in need of edge-rushing talent, and Ford would certainly fit the bill. Ford registered a career-high 13 sacks last season, making his first Pro Bowl. Ford played in a 4-3 at Auburn and, interestingly, would be a full-time end in the 49ers’ 4-3. Beyond Ford, the Chiefs have 2018 second-round pick Breeland Speaks and 2017 second-rounder Tanoh Kpassagnon. Those two have combined for 3.5 sacks in three seasons.

The Chiefs had reportedly been shopping Ford even they slapped him with a franchise tag that will pay him up a bit more than $15MM. The front office had reportedly been seeking a second-rounder in exchange for Ford, but there were some pundits who believed that organization may have to settle for a third-rounder plus another asset. Ultimately, it sounds like San Francisco was willing to meet Kansas City’s asking price.

The Chiefs pass-rushing corps will look a whole lot different next season. The team recently released Justin Houston, leaving the team with few edge defenders on the roster.