The Chiefs and 49ers are deep in talks about a Dee Ford trade, Ian Rapoport of NFL.com tweets, adding this deal could end up being finalized on Tuesday night. 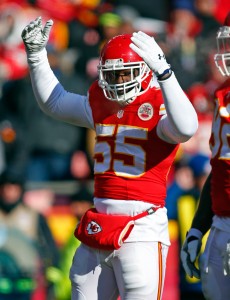 This would be a major move for a Chiefs franchise that just released Justin Houston. The Chiefs put out trade feelers for both Houston and Ford, but speculation persisted about the team being prepared to jettison only one of its edge starters. But now? The 2019 Chiefs’ pass rush may look quite different from the most recent corps.

Should this trade come to pass, the Chiefs may not be likely to obtain one of the 49ers’ top two draft picks. They were targeting a Round 2 choice for Ford, but Bleacher Report’s Matt Miller tweets a third-rounder and an additional asset may end being the return. This would be similar to Kansas City’s 2018 Alex Smith trade, which brought back a third-round pick and Kendall Fuller.

San Francisco was one of the destinations mentioned for Ford. The 49ers are in need of edge-rushing talent and have been linked to that spot with their No. 2 draft pick. They may soon be in position to work out a new contract with Ford, on whom the Chiefs placed their franchise tag. That component will be key in this process, per Rapoport.

Ford, who is set for his age-28 season, was given the linebacker franchise tag — worth just more than $15MM.

This would leave the Chiefs with no proven edge rushers. But the tag-and-trade scenario would free up more than $15MM in cap space, whereas the team had to eat some dead money in its Houston release.

Ford registered a career-high 13 sacks last season, making his first Pro Bowl. While he has not been especially reliable in his career, he is by far the Chiefs’ best in-house edge rusher. But with K.C. moving to a 4-3 defense, new DC Steve Spagnuolo appears to be willing to rock the boat to find better fits.

Ford played in a 4-3 at Auburn and, interestingly, would be a full-time end in the 49ers’ 4-3. Beyond Ford, the Chiefs have 2018 second-round pick Breeland Speaks and 2017 second-rounder Tanoh Kpassagnon. Those two have combined for 3.5 sacks in three seasons.