Dec. 18: The Colts will indeed have their primary punter and kickoff specialist back in action this weekend, per Joel A. Erickson of the Indianapolis Star (via Twitter). Sanchez’s could be key for an Indy squad that is neck-and-neck with the Titans in the AFC South.

Dec. 17: After undergoing surgery to remove a cancerous tumor earlier this month, Colts punter Rigoberto Sanchez returned to practice this week. In fact, there’s a chance he could end up seeing the field this weekend, as head coach Frank Reich said he’s holding out hope that the 26-year-old can play against the Texans (via ESPN). 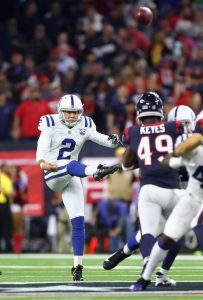 Sanchez, a former undrafted free agent out of Hawaii, burst on the scene when he earned PFWA All-Rookie Team honors during the 2017 campaign. He didn’t miss a game for the Colts up to Week 12 of this season, when he had a season-high in punts (five) and punting yards (254). That performance came only days after the 26-year-old received his diagnose.

“I wasn’t going to do that to my team,” Sanchez said of potentially missing that Week 12 contest (via ESPN’s Mike Wells). “It’s all about the team. At the end of the day, I don’t think they would have been able to get a punter in in time, and it wasn’t going to be any worse. That was already worst-case scenario. I was going to fight through the pain, whatever it was. No need to make a bigger deal than it is. I was going to get surgery Tuesday already, so I was like, ‘Can it get any worse?’ I asked the doctor if it could get any worse and he said, ‘No.’ So then I’m like, ‘OK, I’m going to play. I’m going to do it for my brothers. They need me.’ That’s what it was.”

Ryan Allen has filled in for Sanchez over the past two weeks, with the veteran compiling a net average of 36.7 yards…10.5 yards behind Sanchez’s 2020 numbers. Before long, whether it’s this weekend or next, Sanchez should resume his punting and kickoff duties.

“I was overwhelmed throughout this crazy process of ups and downs mentally and all of it, but it helped out so much having everybody by my side — family members reaching out, friends, you name it,” Sanchez said.

Ryan Allen has not been able to stick with a team since his Patriots run ended, having punted in just nine games over the past two seasons. But the veteran specialist is set to receive another opportunity for a playoff contender.

In need of a punter after Rigoberto Sanchez received a cancer diagnosis, the Colts added Allen to their practice squad. He will head to Indianapolis after punting in a game with Tennessee this season. Sanchez underwent surgery to address a cancerous tumor Tuesday.

The Titans cut Allen from their practice squad last month. The four-time Super Bowl punter played eight games for the Falcons in 2018. With the Colts not having another punter on their active roster or practice squad, Allen should be expected to be promoted by Saturday. This will be contingent on the punter having tested negative for COVID-19 across a six-day period this week.

Sanchez, who signed an extension last year, has been the Colts’ punter since Week 1 of the 2017 season. With the exception of one Pat McAfee absence in 2010, the Colts have only used two punters in games over the past 12 seasons.

Allen, 30, has punted in 105 NFL games. He averaged just 41.9 yards per punt in 2019 with Atlanta but finished at 45.1 in his final New England season, which he capped with a strong Super Bowl LIII showing.