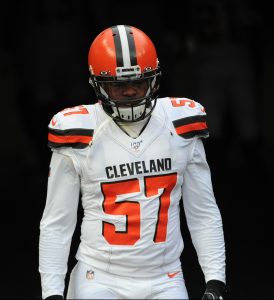 Buccaneers strongside linebacker Kendell Beckwith was involved in a car accident last week in Louisiana, Bucs GM Jason Licht told reporters (Twitter link via Jenna Laine of ESPN.com). Beckwith suffered a fractured ankle in the crash and had to undergo surgery. He will miss a significant portion of the offseason as a result and it’s not clear whether he’ll be ready to go in Week 1.

“We’re very fortunate that it wasn’t life-threatening,” Licht said (via Greg Auman of the Tampa Bay Times). “He’ll be out of OTAs and in training camp, we’ll have a better idea of how far along he is.”

Beckwith, a third round pick in the 2017 draft, fell to the Bucs after suffering a torn ACL. It’s presently unknown whether his broken ankle is on the same leg.

Last year, the Bucs used Beckwith at all three linebacker spots as he appeared in all 16 games with eleven starts. The 23-year-old had 73 total tackles on the year, including a huge 14-tackle game against the Patriots in the first month of the season. Beckwith wasn’t originally ticketed for a starting role, but he wound up playing on 847 snaps as a rookie.

Beckwith’s injury could prompt the Bucs to take a closer look at linebackers in the later rounds of next week’s draft. The team may also lean more heavily on linebacker Adarius Glanton, though he is recovering from an injury of his own after breaking a leg in December (a side note – Glanton recently took on his father’s surname, so he will take the field as Adarius Taylor in the fall).

The Buccaneers have agreed to re-sign Adarius Glanton, according to Ian Rapoport of NFL.com (on Twitter). The linebacker will receive a $250K signing bonus as a part of his new deal. Full terms of the pact have yet to be disclosed. 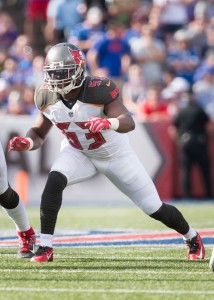 Glanton was scheduled for restricted free agency this year, but the Bucs opted against using a tender on him. Glanton is coming off of a broken leg which cost him the final weeks of the 2017 season.

Glanton has appeared in 35 games for the Bucs over the past three years, and started four contests in 2017. During that time, Glanton managed 19 tackles and one sack while playing nearly as many snaps on special teams (213) as he did on defense (284). Pro Football Focus was down on Glanton’s play in 2017, assigning him poor grades of 47.4 in run defense and 48.6 in pass coverage.

The Buccaneers announced that they have placed guard J.R. Sweezy and linebacker Adarius Glanton on injured reserve. Glanton had surgery on his broken leg on Monday night. Sweezy, meanwhile, should be able to avoid surgery for his lower leg injury, according to head coach Dirk Koetter.

Sweezy signed a five-year, $32.5MM deal with the Buccaneers in 2016 but he was forced to miss all of last year with a back ailment. This year, he stayed healthy for the majority of the season until a new injury caught up with him. In April, the Bucs reworked his deal to give them some additional protection against potential health issues.

By starting in all 14 games to date, Sweezy has likely satisfied the contract escalator in his deal that will restore his base pay to $6.5MM in 2018.