The 49ers have agreed to re-sign safety Antone Exum to a one-year deal worth $895K, according to Adam Schefter of ESPN.com (Twitter link). 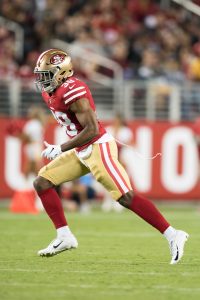 Exum, 28, was one of five San Francisco safeties that saw at least 25% playtime in 2018, joining Jaquiski Tartt, Marcell Harris, Adrian Colbert, and D.J. Reed. Add in Jimmie Ward, who re-signed on Wednesday and can play both corner and safety, and the 49ers will likely have quite the competition in their defensive backfield.

Exum played the most snaps of any of those aforementioned safeties last year, appearing in 15 games while starting seven. In that time, the former sixth-round pick posted 40 tackles, one interception, and one sack while grading as the NFL’s No. 61 safety among 93 qualifiers, per Pro Football Focus.