The AFC East’s teams will report to training camp this week. Here is the latest surrounding the Patriots and their perennial challengers:

Williams started eleven games and made 15 total appearances for the Titans last year, his first campaign outside of Denver since the Broncos made him a first-round pick in 2014. He was strong against the run in 2017, but he didn’t fare well with the Lions this year. Last week, Detroit cut him loose after trading for Damon Harrison.

At the time of his release, Williams ranked as Pro Football Focus’ No. 78 overall defensive tackle in the league with a subpar score for run defense. He didn’t fill the traditional stat sheet much either with six tackles in six games.

Last season, Williams played on roughly a third of the Titans’ defensive snaps, good for third-most among the club’s defensive linemen. Pro Football Focus gave him high marks against the run and some not-so-great marks for his work on passing downs.

The Dolphins will designate offensive lineman Jake Brendel and linebacker Mike Hull to return from injured reserve, according to Cameron Wolfe of ESPN.com (Twitter link), who reports both players were back at Miami’s practice on Wednesday. 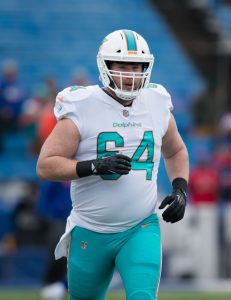 Both Brendel and Hull were placed on injured reserve in September after initially being carried through to the Dolphins’ initial 53-man roster. NFL rules stipulate that any player who returns from IR must have been on his club’s original 53-man roster, and also mandates a minimum eight-week absence. As such, both Brendel and Hull can be activated in advance of Miami’s Week 9 matchup against the Jets.

Brendel, 26, joined the Dolphins’ practice squad in 2016 after going undrafted out of UCLA. He went to appear in all 16 games for Miami in 2017, although he didn’t see much action on the field. Brendel played 67 snaps on offense and 87 snaps on special teams, serving in a backup role for the entire campaign. Once he returns from IR, Brendel will give the Dolphins another interior option behind veterans Travis Swanson and Wesley Johnson, the former of whom has taken over at center following Daniel Kilgore‘s season-ending injury.

Like Brendel, Hull has mostly served as a backup since joining the Dolphins in 2015. He played in 32 games from 2016-17, making four starts during that time. But Hull’s main contribution has come on special teams, where he racked up a whopping 631 snaps over the past two seasons. His return could bolster a Miami special teams unit that already ranks third in DVOA, and give the Dolphins linebacker depth after the club placed Chase Allen on injured reserve earlier today.

Because each team is only allowed to IR/return players, Brendel and Hull’s activation will prevent the Dolphins from bringing any other injured players — such as offensive linemen Josh Sitton or Kilgore, or defensive end William Hayes — back in 2018.

The Jets‘ quarterbacks looked solid during last night’s preseason win over the Falcons, completing 21 of 27 pass attempts for 178 yards and a pair of touchdowns. While veteran Josh McCown sits atop the depth chart, head coach Todd Bowles acknowledged that any of the team’s three signal-callers (a grouping that also includes Teddy Bridgewater and first-rounder Sam Darnold) could end up earning the starting gig.

“We’ll see how the preseason goes,” Bowles said (via Brian Costello of the New York Post). “Like I said, I’ll make my decision when it happens. I’m not going to jump to any conclusions after one game. I’m going to take my notes and watch practice and compare with the coaches and we’ll come up with a decision. It’s a tough decision. We’ve got three good players and we’re happy to have them.”

As ProFootballTalk.com’s Michael David Smith points out, Bowles previously said that the team would wait until the end of the preseason to make a decision on their starting quarterback. In other words, there’s still plenty of time for the depth chart to sort itself out.