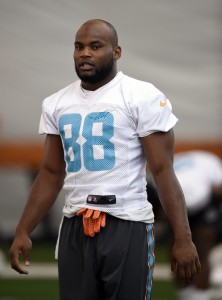 The Dolphins‘ interest in adding cornerback help led them to consider supplemental prospect Sam Beal, as Barry Jackson of the Miami Herald writes. However, Miami didn’t hold Beal in as high regard as did the Giants, who sacrificed a third-round pick in order to land the Western Michigan product. Beal, of course, suffered a season-ending injury upon landing in New York, but he could have provided depth to a Dolphins defensive back depth chart currently led by Xavien Howard, Cordrea Tankersley, and Bobby McCain. Given that Miami is still searching for cornerback reinforcements, Jackson speculates the club could be interested in a trade in the coming weeks, but notes the Dolphins are loathe to sacrifice high draft picks.

Former Patriots defensive end Cassius Marsh recently trashed the legendary “Patriot way,” saying the Patriots’ uptight nature didn’t allow him to have any fun and that his time in New England almost caused him to walk away from the game.

Now a member of the 49ers, Marsh provided details on his experience with the Patriots in an interview with Eric Branch of the San Francisco Chronicle. Marsh revealed that he “wanted to get waived” and facilitated a meeting with Bill Belichick with that goal in mind. He said the Patriots misused him, asking him to do things he had never done before, saying they had him “covering running backs and receivers and basically almost never rushing the passer” which is what he was used to.

Marsh ultimately got what he wanted, and was claimed off waivers by the 49ers. He’ll be playing on the opposite side of the country now for a team with a much different culture. It’s very rare for a player to openly criticize Belichick and the Patriots like this, and whatever you think of Marsh’s comments, it’s refreshing to see a player speak this honestly.

Here are more notes from the league’s eastern divisions:

Leonte Carroo Not A Lock To Make Dolphins

Wide receiver Leonte Carroo was a relatively high draft pick a year ago, going in the third round (86th overall) to the Dolphins. Now, after a quiet rookie season, Carroo isn’t certain to make the Dolphins’ roster this year, according to Barry Jackson of the Miami Herald.

Miami moved up in a trade with the Vikings in order to draft the ex-Rutgers star, which should make it all the more difficult to cut ties with Carroo so early. The Dolphins surrendered a sixth-round pick in 2016 and two mid-rounders (a third and fourth) in this year’s draft for Carroo, who was a non-factor in his first NFL season. The 6-foot, 217-pounder played just under 13 percent of the Dolphins’ offensive snaps across 14 games (two starts) and hauled in three catches, including a touchdown, on a mere six targets. Carroo was so unimpressive that playoff-bound Miami deactivated him for its final three games, including its wild-card round loss to the Steelers.

As he did last season, the 23-year-old Carroo will again jockey for position as part of a top-heavy Dolphins receiving corps in 2017. Jarvis Landry, DeVante Parker and Kenny Stills figure to easily outshine Carroo even if he does make the team. And while there aren’t any other proven wideouts on the roster, which might help Carroo’s cause, newly acquired tight end Julius Thomas and running backs Jay Ajayi and Damien Williams could also overshadow him in the Dolphins’ Ryan Tannehill-led passing game.

Less than 24 hours before the start of the NFL’s legal tampering period, conflicting reports have emerged regarding Browns wide receiver Terrelle Pryor. While Mary Kay Cabot of Cleveland.com indicates the Steelers will be one of several teams to pursue Pryor this week, Gerry Dulac of the Pittsburgh Post-Gazette (Twitter link) says Pittsburgh doesn’t have any interest in Pryor, at least at the $10MM+ he’s expected to command. The Giants, 49ers, Eagles, and Titans have also been linked to Pryor, whom Cleveland is attempting to re-sign.