The Saints have swapped one veteran running back for another. Coach Sean Payton announced today that the team has signed Jacquizz Rodgers and waived Rob Kelley (via The Athletic’s Larry Holder on Twitter). 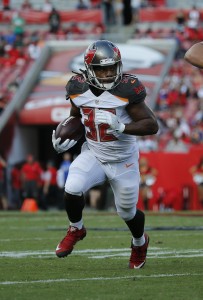 Rodgers, 29, spent the past three seasons with the Buccaneers. Tampa Bay used him as more of a traditional running back during his first two seasons with the team, including a 2016 campaign where he ran for 560 yards. In 2018, the veteran found some of the pass-catching prowess that he had displayed during his early-career stint with the Falcons. Rodgers ultimately finished last season with 38 receptions, which was his highest total since 2013.

After losing Mark Ingram in free agency, the Saints have been looking for another running back to pair with Alvin Kamara. Latavius Murray should have the first crack at the job, but if he struggles, Rodgers could easily take on a bigger role (although he’s not necessarily a complement to Kamara). The Saints are also rostering Dwayne Washington, Devine Ozigbo, and Matt Dayes.

Kelley averaged 4.2 yards per carry as a rookie in 2016, but he hasn’t shown anything close to that since. The 26-year-old only suited up for two games with the Redskins last year thanks to a toe injury, and there’s always been some questions about his weight. Still, considering his age, it wouldn’t be shocking if Kelley found another NFL opportunity.

Another Redskins running back will head to IR. Rob Kelley will join Derrius Guice and Byron Marshall on the team’s injured reserve list, with a toe injury set to shelve the third-year back for at least two months, John Keim of ESPN.com tweets. 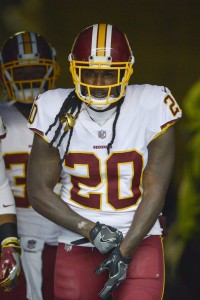 Kelley was set to miss around a month of action because of this malady, per Jay Gruden (via Keim, on Twitter), and the Redskins decided to save a roster spot. Kelley, whom Gruden said might need surgery, will not be eligible to return to action for eight weeks.

As a rookie, Kelley broke out and became the leading rusher for the playoff-contending Redskins. He amassed 704 rushing yards and six touchdowns. He was not as prominent of a backfield fixture last season, though, and saw the late-arriving Peterson usurp his potential 2018 role.

We learned earlier today the Redskins were signing running back Adrian Peterson, and the team officially announced the transaction this evening. The future Hall of Famer struggled to gain much interest from NFL teams this offseason, so he’s naturally looking forward to returning to the field.

“I’m excited,” Peterson told Jake Kring-Schreifels of Redskins.com. “It’s been a long offseason but I’ve been keeping my body in shape and [I’m] ready for this opportunity. So when this opportunity presented itself, I was just excited.”

The 33-year-old also acknowledged it was difficult waiting around for a team to sign him, as the veteran had failed to generate any reported interest after being released by the Cardinals.

“I would be lying to you if I said [the offseason] wasn’t tough, because you’re human,” Peterson said. “I’ve seen guys come through that door and guys go through this process. I had a great appreciation for it. But me knowing what I had left in the tank, that was the only thing bothering me. But I knew in due time the opportunity would present itself.”

Rob Kelley‘s season is over. The Redskins announced that the running back has been placed on injured reserve. As previously reported, Byron Marshall has been signed off of the Eagles’ practice squad to replace him.

Kelley, the Redskins’ top running back, is dealing with a high ankle sprain and a sprained MCL in his left knee. There was initially some hope that Kelley could return to the lineup later this season with some rest. Unfortunately, it sounds like he’ll need a little longer to recover and the Redskins are not willing to have him occupy a spot on the 53-man roster until he heals up.

Even before the latest injury, Kelley wasn’t all that sharp this year. In seven games (all starts), Kelley has ran for just 194 yards off of 62 carries, giving him an average of 3.18 yards per carry. He was previously dealing with a rib injury, so it’s possible that he has not been near full strength all year.

Without Kelley, the Redskins will be relying on Chris Thompson, rookie Samaje Perine, and Marshall to hold down the running game. Of course, the trade deadline has come and gone, so the Redskins will be limited to the free agent market if they want to make any further upgrades to the group.

The Redskins have bolstered their running backs group by plucking one from their rival. Washington is signing Byron Marshall off of the Eagles’ practice squad, a source tells Master Tesfatsion of The Washington Post. 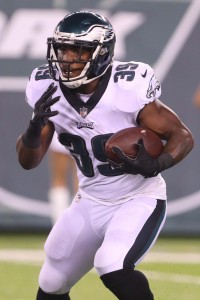 Marshall comes to the Redskins at a time when they badly need depth at running back. Starter Robert Kelley is dealing with multiple injuries to his left knee and is expected to miss a few weeks, leaving rookie Samaje Perine and pass-catching specialist Chris Thompson as the team’s only healthy RBs. Marshall not only has a good chance to dress, but he could actually get some chances to carry the ball.

Marshall first came to the Eagles as an undrafted free agent out of Oregon in 2016. He was on the Eagles’ active roster for the final few games of last season and ran for 64 yards off of 19 attempts and hauled in three catches for ten yards. The 23-year-old hasn’t seen a ton of time on the field, but coaches have spoken highly of him in Philly.

Before signing Marshall, the Redskins also considered Ronnie Hillman and Daryl Richardson. Both veterans will have to continue to look for work elsewhere.