The Jaguars have agreed to a three-year, $24.4MM deal with Roy Robertson-Harris (Twitter link via NFL.com’s Tom Pelissero). The defensive tackle will receive $14MM in guarantees as a part of the deal. 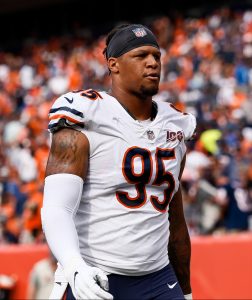 Robertson-Harris started six of the Bears’ eight games before suffering a season-ending shoulder injury. His specialty is run-stuffing, so he played on roughly 50% of Chicago’s snaps. He’s also shown glimpses as a pass-rusher too, notching 2.5 sacks in 2019 and three the year prior. An UDFA from UTEP back in 2016, he’s already carved out a nice career for himself, despite injuries. He also missed his entire rookie season, spending it on the the NFI list.

The Bears kept Robertson-Harris with a second-round tender last year, but they couldn’t keep him for anything close to that one-year, $3.2MM deal. Instead, he’ll join up with Urban Meyer & Co., potentially with safety John Johnson.

Bears defensive lineman Roy Robertson-Harris signed his second-round tender, according to Brad Biggs of the Chicago Tribune (on Twitter). With that, he’ll return for another season in Chicago while earning just over $3.2MM.

Robertson-Harris was set for restricted free agency, but the Bears didn’t want to let him get away. The $3.2MM+ tender was enough to scare off any possible suitors – any team that signed him to an unmatched offer sheet would have had to pay a steep tax in draft capital. Since he entered the league as an undrafted free agent, there would’ve been no compensation for the Bears had they tendered and lost him at the original-round level.

The UTEP product spent his entire 2016 rookie season on the reserve/NFI list, but earned his spot on the team in 2017. Ever since, he’s been getting more and more time on the field. Last year, he appeared in 15 games and started seven, racking up 30 tackles, 2.5 sacks, and three passes defended from the interior. All together, he played on more than 50 percent of Chicago’s defensive snaps.

The Bears are looking to keep Roy Robertson-Harris in the fold. The team tendered a contract to the impending restricted free agent, they announced in a release, and Ian Rapoport of NFL Network tweeted that it’s a second-round tender to help ensure no team poaches him away. 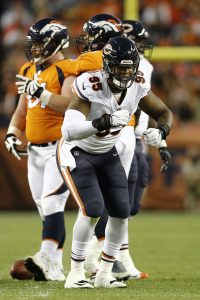 Robertson-Harris will still be free to sign an offer sheet with another team when free agency opens, but the Bears will have the opportunity to match. Should they decline to match, that team would have to give the Bears their second-round pick. Since Robertson-Harris certainly isn’t a star player, it virtually guarantees that no other team will present him with an offer and risk giving up the pick.

Since he entered the league as an undrafted free agent back in 2016, there would’ve been no compensation for the Bears had they tendered him at the original-round level and he walked in free agency. It represents a nice pay bump for the UTEP product, as the second-round tender projects to clock in at a little above $3.2MM for 2020.

He spent his entire rookie season on the reserve/NFI list but made the team in 2017, and his role has slowly grown in each of the past three seasons. He played his biggest part yet this past season when he appeared in 15 games and started seven, racking up 30 tackles, 2.5 sacks, and three passes defended from the interior. All told, he played a hair over 50 percent of the defensive snaps.