The Saints have added another wideout. After signing Michael Floyd earlier tonight, the team has also added receiver Brandon Tate, reports Nick Underhill of The New Orleans Advocate (via Twitter). Josh Katzenstein The Times-Picayune tweets that the Saints have also placed wideout Travin Dural on the injured reserve. 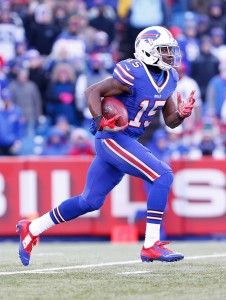 The 30-year-old Tate spent the past two seasons with the Bills, including a 2017 campaign where he hauled in 6 receptions for 81 yards and one touchdown. In recent years, he’s primarily played a role on special teams, serving as both a kick and punt returner. The former third-rounder has averaged 23.8 yards per kick return and 9.5 yards per punt return throughout his career.

Tate could slide into a special teams role in New Orleans. The Saints are reportedly looking to reduce running back Alvin Kamara‘s role in the return game, and while the team is still rostering Tommylee Lewis and Ted Ginn Jr., both players are accompanied by their own question marks (lack of production for Lewis, fumbles for Ginn). Saints coach Sean Payton recently admitted that the team’s return game is up in the air (via Joel A. Erickson of The Advocate.)

“Our return game, it’s kind of like ‘The Bachelor’ right now,” Payton said. “We’ve got about 12 contestants, all with roses. We don’t know who our returner’s going to be, and if she doesn’t like any of them, we’re bringing in more.”

Tate’s only had two seasons with more than 200 receiving yards, so it’s unlikely he’ll establish a role in a crowded receivers depth chart. Even with his special teams prowess, he’ll still have to compete for a roster spot with the likes of Lewis, Floyd, and Austin Carr.

The Saints have agreed to deals with 12 undrafted free agents, all of whom are listed below.