Two years ago today, Titans wideout Rishard Matthews requested his release. The veteran receiver was hoping the impending move would lead to a bigger role elsewhere. Instead, it likely spelled the beginning of the end for his career.

The 2012 seventh-round pick out of Nevada spent the first four seasons of his career with Miami, culminating in a 2015 campaign where he compiled 662 receiving yards on 43 receptions. This performance earned him a three-year contract from the Titans, and Matthews immediately became a contributor to his new team. The wideout’s first season in Tennessee proved to be the best of his career; he finished with career highs in receptions (65), receiving yards (945), and receiving touchdowns (nine). He missed a pair of games in 2017, but he still put up similar per-game numbers (53 receptions, 795 yards, four scores). Unfortunately, the wheels fell off in 2018.

It started with a preseason contract extension that was self-negotiated by Matthews. The deal was the equivalent of a team option that would pay the receiver $7.5MM, but none of that money was guaranteed. The deal was generally panned by pundits, and while the contract has never been explicitly attributed to Matthews’ dissatisfaction with the organization, you’ve got to wonder if it played a role.

Of course, Matthews was also unhappy with his role in the passing game. Through the first three games of the 2018 season, the receiver had only hauled in three receptions for 11 yards. He played only 50% of the team’s offensive snaps through three weeks (third among Titans receivers behind Corey Davis and Tajae Sharpe), and he was ranked sixth on the team in targets. Part of that reduced production was thanks to subpar quarterback play from Marcus Mariota and Blaine Gabbert, but Matthews also seemed to blame the coaching staff.

“I’ve been the leading receiver for two years,” Matthews said at the time. “Then all of a sudden I’m barely playing and not even starting. Using my injury as the scapegoat. Look at number of snaps and targets.”

Matthews ultimately got his wish, as he was released by the Titans the day after his public request. After hiring Drew Rosenhaus for representation, Matthews proved to be a popular free agent target, with the Browns, Cardinals, and Jets expressing interest. The receiver ultimately landed in New York, but he didn’t do much for his new team; in five games for the Jets, Matthews was limited to only two receptions for 13 yards before landing on the IR.

He caught on with the Saints during the 2019 offseason, but he was cut in August. Days later, Matthews announced his retirement. Who knows if things would have been different if Matthews ended up sticking in Tennessee. However, it’s obvious that his public release request — a move made two years ago today — certainly didn’t help his prospects of sticking around the NFL.

This is the end of the line for longtime NFL wide receiver Rishard Matthews. On Monday, the veteran announced his retirement from football. 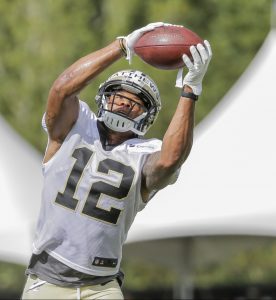 “It was cool being a professional football player and getting to play a kids game for work,” Matthews wrote on Instagram. “I will always be a fan of the best sport in the world but for me that kids game no longer exist [sic].”

Matthews, a Dolphins seventh-round pick in 2012, spent four years with Miami before moving on to the Titans. After making some noise with the Fins in 2015, he enjoyed a breakout campaign with the Titans in ’16, leading the team in receptions (65), yards (945) and receiving touchdowns. He once again paced Tennessee the following campaign before being released in 2018.

Matthews leave the game with 230 receptions for 3,160 yards and 21 touchdowns.

Rishard Matthews‘ Saints tenure will end shortly after it began. After signing the former Dolphins, Titans and Jets wideout in June, the Saints released Matthews on Saturday, Field Yates of ESPN.com tweets.

The team used the reserve/left squad designation to make the move. Matthews has not been able to land on his feet since a 2018 injury sidetracked his career. He managed just five receptions for 24 yards last season, splitting time with the Titans and Jets.

A seventh-round pick by Miami in 2012, Matthews enjoyed a breakout campaign with the Titans in 2016, leading the team in receptions (65), yards (945) and receiving touchdowns. He again paced Tennessee the following campaign before being released in 2018.

This ends what has been been the most disappointing campaign of Matthews’ career. The former Dolphins and Titans starter will wrap up his seventh NFL season with just five receptions for 24 yards.

No longer attached to his Titans extension, with Tennessee having released him and Gang Green then signing him for the league minimum, Matthews will be a free agent at season’s end.

Going into this season, Matthews had been the Titans’ No. 1 wideout for two years and enjoyed a solid contract year with the Dolphins to earn him that Tennessee deal. He signed a one-year Tennessee extension in August. A knee surgery this offseason looks to have damaged Matthews’ value.

The former seventh-round pick stands to enter the market in March at 29 and hoping a team will view him as a bounce-back candidate. In 2017, Matthews caught 65 passes for 945 yards and nine touchdowns.

Former Titans wide receiver Rishard Matthews is signing with the Jets, according to Adam Schefter of ESPN.com (on Twitter). Matthews requested and received his release in late September, making him a free agent.

Matthews had nearly 800 receiving yards last season, but he spent nearly one month on the free agent market before agreeing to join the Jets. Matthews’ extended unemployment may be connected to a perception that he quit on the Titans, concern over his lack of targets early in the year, or a mix of both. In three games with the Titans this year, Matthews had just three grabs off of six targets.

“I’ve been the leading receiver for two years,” Matthews said. “Then all of a sudden I’m barely playing and not even starting. Using my injury as the scapegoat. Look at number of snaps and targets.”

He now joins the Jets, whose receiver depth has been decimated by injuries. The Jets recently cut ties with offseason pickup Terrelle Pryor due to health issues and top receiver Quincy Enunwa is expected to miss multiple games with a high ankle sprain.

Matthews will have to quickly pick up the playbook, but he should rank no lower than third on the depth chart behind Robby Anderson and Jermaine Kearse once he learns the offense. After all, he’s not far removed from a 2016 season in which he caught 65 passes for 945 yards and nine touchdowns.

If he’s on the active roster, Matthews’ Jets debut could come against the Bears on Sunday.

Free agent wide receiver Rishard Matthews is hoping to play again this season, but he is aware that he may not be able to land a contract, as he tells Ian Rapoport of NFL.com (Twitter link).

“I will be ready for whatever team is willing to believe that I am a team player and [a] hard worker,” said Matthews. “As you know, I protested during the Anthem a year ago. I haven’t in 2018 and don’t plan to do so. Also, I feel my previous team is not giving me a good rep even though they were willing to sign me to an extension. The hope is I can (play this season). If not, I’ll be better than I have ever been and ready for next season.”

Matthews requested, and was granted, his release from the Titans in late September after complaining about his lack of targets. Matthews had appeared in three games for the Titans, but was tied for sixth in targets with tight end Luke Stocker and fellow receiver Tajae Sharpe. He’d played exactly 50% of Tennessee’s offensive snaps, which ranked him third among Titans wideouts behind Corey Davis and Sharpe. The 28-year-old had produced just three receptions for 11 yards on six targets.

Matthews, who self-negotiated a widely panned extension earlier this year, has since hired agent Drew Rosenhaus to help him find a new deal. Over the past two weeks, Matthews has worked out for the Browns, Cardinals, and Jets, but has yet to garner a pact.

Jets To Work Out Rishard Matthews

The Jets will work out former Titans wide receiver Rishard Matthews on Tuesday, a source tells Adam Schefter of ESPN.com (on Twitter). The Jets are in need of help at wide receiver with injuries to Quincy Enunwa (ankle), Terrelle Pryor (groin), and Charone Peake (hamstring) and have just three healthy receivers on the roster.

Matthews, 29, played in three games with the Titans this year before requesting – and receiving- his release. Matthews was unhappy with his playing time in Tennessee, but he could find a sizable role with the Jets for at least a few weeks.

Matthews recently hired Drew Rosenhaus with the hope that the agent could improve the league’s perception of the receiver while steering him to a club that will use him appropriately. Nearly three weeks later, the veteran is still searching for an opportunity.

Of course, Matthews’ play on the field hasn’t helped his free agent status. The former seventh-round pick was only targeted six times in three games, hauling in three receptions for 11 yards. He also had four punt returns for 38 yards. Still, he’s not far removed from a 2016 campaign where he compiled 945 receiving yards and nine touchdowns, so his next gig shouldn’t be far off and could very well come with the Jets.

On Monday, the Browns learned that wide receiver Rashard Higgins will miss 2-4 weeks of action with a sprained MCL. Rishard Matthews will work out for the team today and could theoretically help to fill the void, but coach Hue Jackson says the Browns are inclined to stick with their current options.

“We’ll see. I mean, I haven’t seen [GM] John [Dorsey] since I was down there earlier. But we’ll see how it unfolds. We have some good candidates here, and I like our guys that are here. So we’ll just see how it all unfolds as we go through the day,” Jackson said. “I feel like [backup receivers Rod Streater, Derrick Willies, and sixth-round rookie Damion Ratley] know our system, know exactly what we’re looking for and know how to come in and practice the way we do and understand what the opportunity would be for them, not that I wouldn’t like somebody else who could really play. But it’s just hard to find those kind of guys at this time, guys that can come in and really contribute right away just ’cause they haven’t practiced with you, don’t know the system. Guys that you have to get caught up to speed, sometimes it just doesn’t work out as well.”

Free agent receiver Dez Bryant, who was in talks with the Browns earlier this year, may face longer odds of joining the club. When asked about the ex-Cowboys star, Jackson said that he hasn’t discussed the possibility with Dorsey recently.

The Browns thinned out their receiver corps in September by trading Josh Gordon to the Patriots, but Jarvis Landry, Antonio Callaway, and Higgins have been keeping the passing offense afloat. Even without Higgins, it sounds like the Browns are comfortable with the players they already have.