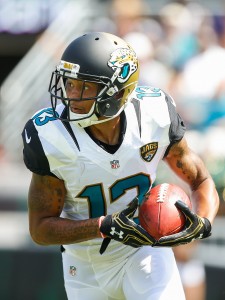 Marks, 28, has been one of Jacksonville’s most reliable and productive defenders in recent seasons, but has been plagued by injuries within the last year. At the end of an impressive 2014 campaign that saw him rack up 8.5 sacks, Marks tore his ACL, delaying his 2015 debut. The former second-round pick managed to appear in just four games for the Jags this season before going down with another significant injury.

While the Jaguars got bad news on Marks, another key contributor returned to practice today, according to Hays Carlyon of the Florida Times-Union. Wide receiver Allen Hurns paid another visit to a sports hernia specialist on Monday, but despite battling an abdominal injury and a foot ailment, he looks like a good bet to be active against the Titans this Thursday.

Per Ryan O’Halloran of the Florida Times-Union (via Twitter), Hurns said today that he may undergo sports hernia surgery after the season. There had been some speculation on Monday that the wideout may need to have such a procedure sooner, sidelining him during the season.